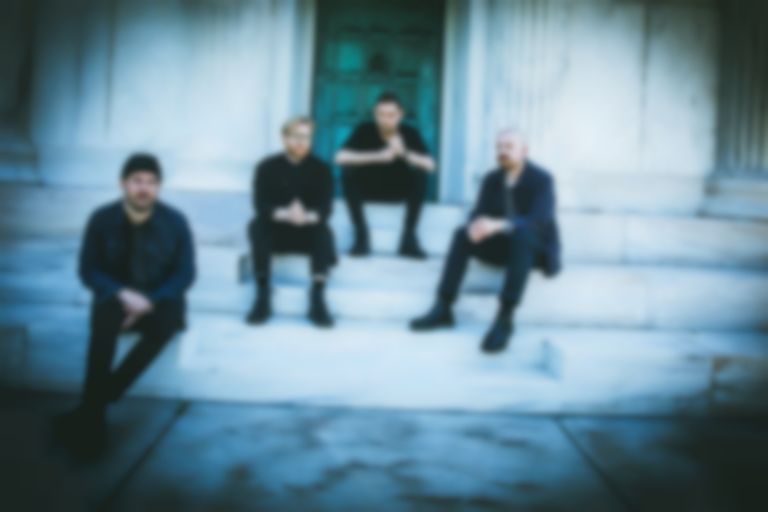 "VTr" is the third single from The Twilight Sad's upcoming fifth offering IT WON/T BE LIKE THIS ALL THE TIME, after earlier singles "Videograms" and "I/m Not Here [Missing Face]".

Speaking about the title of the new track, frontman James Alexander Graham explains, “Andy [MacFarlane, guitarist] called the song "VTr" at the demo stage of writing and we decided to stick with that when it came time to decide on track titles. After the album had been finished and all the songs had been named, as I was walking my wife into the hospital as she was going into labour with our son, I looked down at the pavement and spray painted there was “VTR”." I think the line “there’s no love too small” is one of the most hopeful I’ve ever written – seeing that song title on the ground as I was entering the hospital to have the most life-affirming moment in my life blew my mind. That line came into my head one dark day as all I could see was bad news all around me and all I needed was a bit of good news or compassion to get me through the day no matter how small. Unfortunately, I didn’t see it so the lines “I won’t be surprised if it kills us all” came soon after.

Guitarist Andy MacFarlane delves further into the origins of the track, "Scott [Hutchison] had asked if we could work together on a song and when I was trying to find a starting point he had been talking about how he “could listen to Brian Eno talk shite all day”. So, I took "The Big Ship" from Another Green World, put sections of it in a sampler and made up some loops so I could play along to it on the guitar, and developed the melodies and chords from there. I had been saving from a previous demo that by chance seemed to fit over the chords without doing much to them, so it was kind of a happy accident how that came together."

IT WON/T BE LIKE THIS ALL THE TIME was conceived during their whirlwind tour supporting The Cure, and finished back in January at Devon’s Middle Farm Studios with live engineer Andy Bush.

On their upcoming album, Graham offers, “It’s a dark record but I think there are some uplifting moments to be had too. There are so many extremes here – there are moments that are harsh, then others that are quite melodic and others that are stripped right down. This album definitely comes with the extremes of every side of the band, I think. There’s a certain direct openness and candour now but at the same time I want to keep some mystery. We don’t like to throw things in people’s faces and spell it out for them.”

The Twilight Sad will be touring the UK and Europe over the next couple of months, and will arrive in London on 27 November for a performance at Bush Hall. Find their full touring schedule.