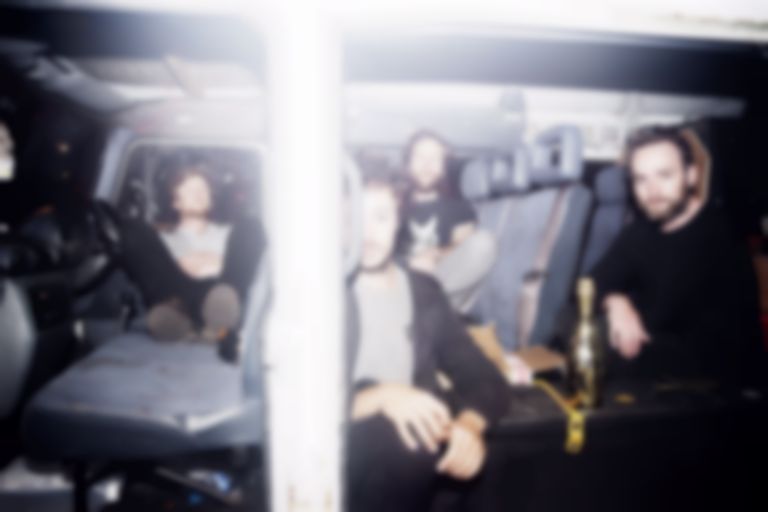 Ear-pummelling crew Spectres debut their new "Welcoming The Flowers" video and tell us all about how it came together.

The Bristol noise masters often paint quite the bleak picture of life in a band. After a chunk of time away they’ve returned with a new video for “Welcoming The Flowers” from 2017’s LP, Condition. Flesh, van, and gore, it’s everything we’d expect from them - and vocalist Joe Hatt (who also directs the clip) brings us up to speed with their recent activity.

BESTFIT: Why’ve you decided to put out a video for this track now?
Joe Hatt: We’ve only released one proper video from Condition and we realised that everyone had forgotten that the album had come out by the end of last year, so we thought it would be good to remind people it exists. We’ve always wanted to do a video for this song. It eulogises the death of our van and it’s long goodbye; we felt a fitting send off for it would be to film a video inside it. The song itself is related to a pretty horrific traffic incident so it all ties in quite well.

Was it important for the video to visually represent some of the lyrics?
Joe: It felt too perfect not to do it. There aren’t a lot of actual mechanical references in there and it’s not a Top Gear homage, but there’s plenty of referencing in terms of the lyrics and themes of the song. I was at a wedding chatting to a friend, she was saying about how someone killed themselves by jumping off a bridge and landing on her windscreen and unsurprisingly it still haunts her quite aggressively to the day. It was a pretty jolly thing to write a song about.

It’s beautifully shot but ultimately pretty disturbing isn’t it?
Joe: In a way we’re trying to draw a line under that whole thing of tops-off, grimy, dark humour by going over the top on all the above and put as many in-jokes and references that nobody else is going to get as possible. The van was a big part of our lives but this video really puts an end to that whole aesthetic. It’s Spectres by numbers but with added vaseline.

Beyond this there’s a new record in the works isn’t there?
Joe: We did the overblown remix album with Dying and we wanted to do something similar for Condition but I don’t think Sonic Cathedral were going to let us do something so stupid again. So we contacted people we know and friends of the band and got five or six through. It’s led by this "Welcoming The Flowers" single but then there’s a load of remixes. It doesn’t make any sense but it’s an oddly coherent collection of Condition remixes from some really exciting electronic acts.

Away from this when can we expect album number three?
Joe: Album number three is on it’s way, we’ve finished recording it. It’s been quite difficult because I live in Germany now so it’s been an interesting process. I only see the guys every month or two, so it’s definitely a development in the way our band works together. We’ve held it together this far and it’s been exciting. I came back for a week last month to record the album and it’s on the way basically.

You’ve got a few UK dates coming up as well, how are those shaping up?
Joe: We’ve got one band practice before the tour in which we’re going to learn to play around four of the new songs live. We haven’t actually done that yet. We haven’t played any of them live with vocals so that’s going to be interesting. We’re basically doing what we can to stay clung onto the bottom rung of the musical ladder. Me moving away hasn’t helped things but we’re giving it a bloody good go.

"Welcoming The Flowers" is part of the remix 12” which will be released this May through Sonic Cathedral. Check out Spectres on Bandcamp.