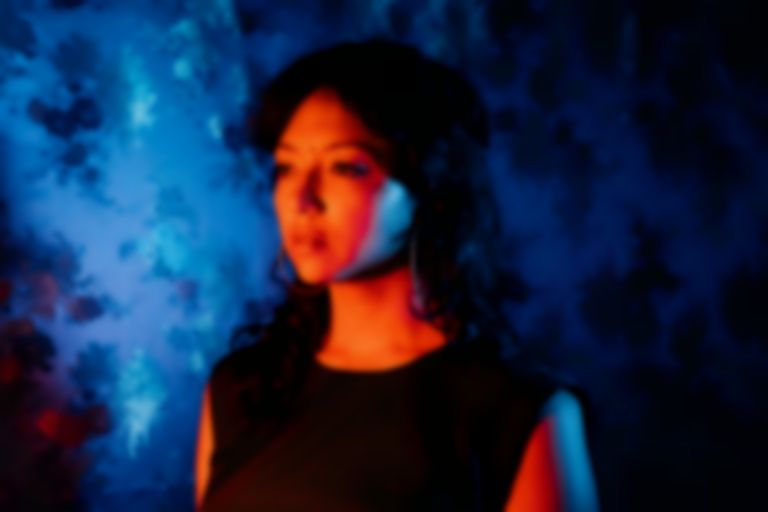 La Luz's frontwoman Shana Cleveland has shared new single "Don't Let Me Sleep", and explains to us that she's excited to "play these space lullabies" from solo record Night of the Worm Moon.

"Don't Let Me Sleep" is the second single to be lifted from Cleveland's Night of the Worm Room record, after last month's "Face of the Sun".

We managed to catch up with Cleveland earlier this week to find out more about her upcoming album and the process behind it. Check out our Q+A below.

BEST FIT: "Don’t Let Me Sleep” is the second new track to come from your new album - how did it come about?

Shana Cleveland: My grandma passed away a couple years ago and for a while after her death she would come and visit in my dreams. Once she was stoned and eating a hamburger. Often she would just waltz into some totally unrelated plot. One night I had a dream that started as the classic musician's stress dream. I was on stage with La Luz playing in a huge theater that was totally packed. We were supposed to go on in mere moments but things kept going wrong. I couldn’t find the power cable for my pedals and my guitar was mysteriously left at the far end of the venue. Amid all this stress I looked over to the side of the stage and saw my grandma there and she was radiating love for me! Everything else just disappeared and it was like that moment where lovers glimpse each other from across a room after a long absence and run into each other’s arms. I was so happy to see her and when I woke up I felt great! It was cool to know that I could wander into this other realm of consciousness where I could still hang out with her even though she was gone from the physical realm, but I was also haunted by the fact that I had no control over if or when that would happen and that’s what this song is about.

For your album, did the tracks come together and fit naturally or was it a process to find the demos that complimented each other?

I tend to write in spurts. I won’t write anything for months and then I’ll write everyday for a month, so it’s always easy to find the albums in there and because I write so much in a short amount of time I often see themes emerge. When I was writing this album I felt really aware of some kind of cosmic energy in the air, this total comic-book-villain had just been elected president, I was getting visited in dreams by my dead grandma, I was living in LA which is both a dreamer's paradise and an endless dystopian traffic jam and life just seemed a bit surreal. California always feels a bit sci-fi to me, that's why I love it, so it seemed fitting to give this California album a sci-fi title.

What would you say is the biggest thing you took away from this album making process?

For this album I worked with Johnny Goss at his house/studio in Seattle. He recorded the first couple La Luz albums so he's an old friend and he knows my style and can kind of predict how I am going to want things to sound before I say anything. There's always a bit of ESP involved in good music relationships and, in working with a bunch of close friends on this record (my partner Will Sprott plays a lot on instruments here as well), I realized how important that element was to me.

On the album you worked with former La Luz bassist Abbey Blackwell - was it good to work together again? Do you find it better to work with different people on your solo work?

Yeah, Abbey's a great musician, really creative and professional and way more schooled than I am so it's always an easy pleasure. My bandmates in La Luz are killers but it's nice to get into a totally different headspace and work with other people for this project.

Now the record is done and dusted, do you treat it like a closed book or is there anything you wish you could go back and alter?

Definitely a closed book. It's a great feeling to just package it all up and set it free out into the world.

What are you most looking forward to this year?

Well I'm pregnant now so I'm really excited to see what that's all about. I recently moved out into the country and am I'm working on a new album which I'm trying to finish up before my son enters the world. It's been a year of a lot of changes, and I thrive on that kind of thing so I'm stoked about all that's to come. And I'm really looking forward to touring this album and getting to play these space lullabies for people in person for the first time.

"Don't Let Me Sleep" is out now. Night of the Worm Moon lands 5 April via Hardly Art. Shana Cleveland will play a few shows with The Mountain Goats in North America later this year. Find out more.