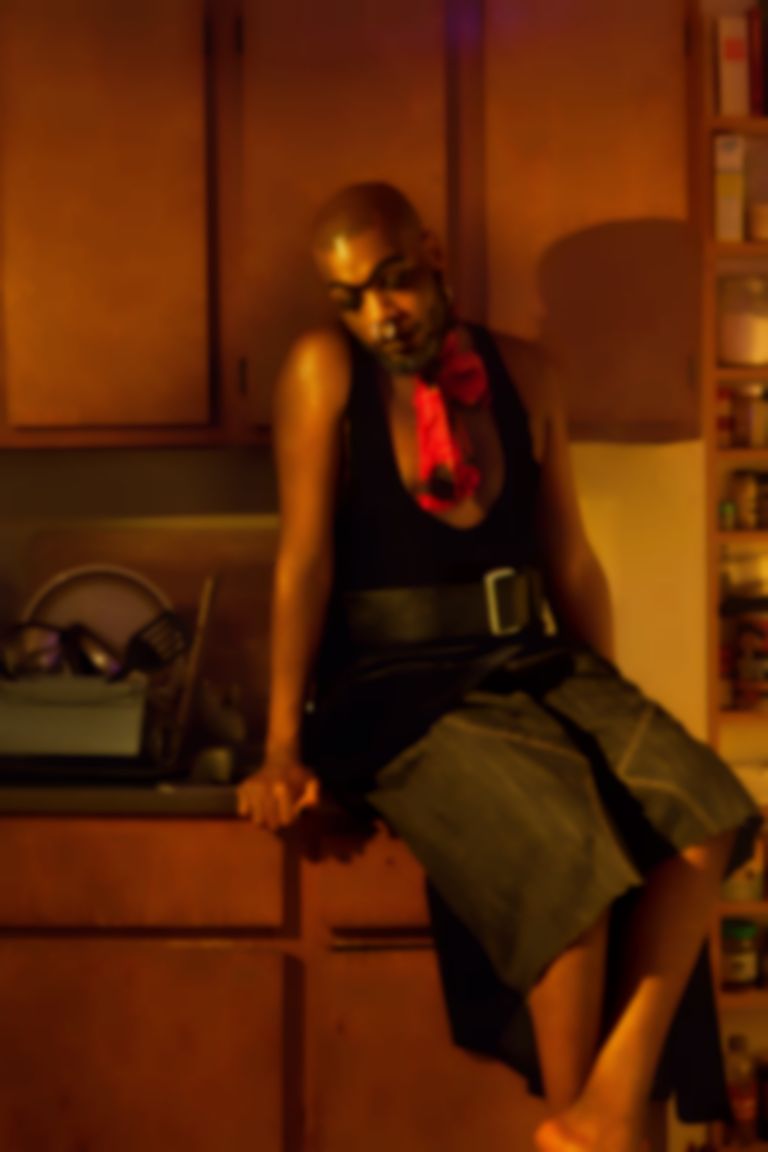 Today sees the release of the blisters EP, the new - and stunning - release by New York-based singer and artist serpentwithfeet.

A classically trained vocalist, Josiah Wise is taking that background and adding it to music which draws from R&B, gospel and industrial...and has created a truly beautiful record. It's hard to pin down the star of the show on blisters but the voice Wise has as serpentwithfeet is a soaring, angelic, profane and honest one. Lyrically he addresses damaged relationships, sexuality and colour within a framework of experimental electronic music. Produced with The Haxan Cloak, blisters is sonically unique and utterly captivating.

We caught up with serpentwithfeet recently to talk about his new record, and it's one of the most fascinating conversations we've been a part of in a long time...

Can you tell me about this musical journey of yours? I know that you started singing in church, but what happened in between then and becoming serpentwithfeet?

“I love talking about this, about the musical journey…it’s exciting for me, even if I wasn’t releasing an EP. I think, typically, when people ask that question I’m like ‘oh I started in church, my mom wanted me to explore more classical things because she didn’t want me to get stuck in any particular trope’.”

But there's a lot more to it than that, right? Especially the classical element...

“Revisiting a lot of the music I grew up on, there were a lot of gospel musicians who were really into classical music. That was always inescapabale…Richard Smallwood or any of these. A lot of people of colour, even before the 1950s, going back a hundred years ago, I think a lot of black people had to learn classical music and European classical music because for historically black colleges in America it was a trophy or a sign that we aren’t just negroes, we’re sophisticated. There’s always been that thing, especially in the south – and I’m from Baltimore, Maryland which is right below the Mason-Dixon line – doing R&B is fine, doing gospel is fine, doing blues is fine…but if you can have that classical backdrop you are more sophisticated, YOU DESERVE PRAISE. You deserve to be paid for your work. So that was always something said explicitly, but it was also implicit. That idiom was always present so it made sense that I went into the classical thing. A lot of my peers did that too; we all had to learn European classical music to prove we weren’t just some stupid coloured people…that might be fucked up, but that’s the way it was.”

Is this still present in that same scene?

“I would assume so; I haven’t been in the church scene since 2006 but I look at how people are responding online to the music, I think it’s amazing. A lot of people – and this isn’t me being shady or fake smart or anything – I just think it’s so interesting…there’s always been that intersection and I assume it’s still there. I was just reading up this morning on Antonin Dvorak and how a lot of his melodies were informed by Negro spirituals. He saw it as important folk music, not as 'black people monkey music'…they’ve always been influenced by black peoples’ ideas, and vice versa. There’s always been that marriage and that conversation, but I feel like we’ve always made them separate. Even in the pop or R&B world it’s like [motions to show separation] this, and this, and this….there's industrial and there's R&B. And I’m like, have those things been separate? When I listen to old Mobb Deep stuff some of it sounds really industrial…Mobb Deep and Nine Inch Nails, were they that different? I’m not certain that they were. There’s a different flair but essentially everyone is part of the same conversation, we just have different accentuations.”

“Oh yeah, I’m definitely not trying to run away from that! All those songs are about my time dating black men, and being in love with black men….in multiple arenas! I’m a big fan – at least at the time of writing it I was – of bromance, and I was also a big fan of black men loving on each other romantically, sexually and all of those things. It’s definitely about my time dating black men, specifically emotionally unavailable black men…but also talking to myself. How can I be trying to ignite something with someone who is emotionally unavailable.”

Yeah there's that line about "how can I touch somebody when they can't even touch themselves?"....

There's also the concept of the "four ethers"; it was hard to get my head round this but it feels like it's analogous with the relationship you're singing about. Like, the four ethers is there around us but we can't prove its existence and it's unattainable, and the person in the relationship is present but you can't reach their essence because they're holding back...

“That’s an amazing way to put it; I think it’s about all of those things. It’s about trying to get clearer about something. When I first wrote it I was thinking about one guy specifically and then as I was writing it, I started thinking about myself. As time went on I guess I can now interpret that song as an overall narrative for a lot of us who mute or diminish certain parts of ourselves for convenience…or even out of habit. I feel like we can be fleeting to our own selves if we don’t keep ourselves in check. I’m a big fan of talking through things and I’m also a big fan of going to therapy. I mean, not for our whole lives but I don’t think there’s anything wrong with going for three weeks, three months or three years. I went to therapy after I wrote that song; my therapist and I talked about that music too, and how it was really important for me to talk through things. Therapy for me wasn’t about there being something wrong; that’s why I was afraid for so many years….he said to me ‘Josiah, you’re not crazy, these feelings are valid. Just express yourself and don’t put yourself in situations where you feel that you’re being devalued.’ Why go somewhere that brings you pain? At that time I was putting myself in uncomfortable positions, so revisiting the songs it seems it’s a lot about stating who you are and the right people will be there. You’ll find your community, but you can’t get through it without going through it. You have to address it. That’s the long version…it’s about me, it’s about other boys haha!”

You're in a position where you seem to be comfortable with your sexuality and gender, but was it difficult to get to that point through the songs?

“I think being closeted is not just about coming out to your parents; it’s also not just about if you wear the sequins and glitter or not. I think being closeted can sometimes be a lot about compartmentalising yourself. For a long time it was very comfortable for me to talk to, or be with, or desire men that could never go beyond level six. They were never going to go to level ten! There was definitely a point of glamour there for me; it was exciting for me, subconsciously, to have that dynamic. I don’t think I went into it like ‘I want a project’ or I wanted a guy not crazy so I could make him be more crazy. I wasn’t looking for a difficult time; all the guys I was talking to, I really enjoyed the idea of digging with someone, unearthing with someone and us exploring ourselves together. That’s genuinely how those relationships started, it didn’t start like ‘you are the muscle boy and I’m the faggot and we’re going to be this unlikely duo’. It was more like, they thought I was crazy, and they wanted some crazy in their life. And I thought they were much more comfortable in their bodies, and much more comfortable sexually than I was…so I think we both got a lot out of it for sure. I learned a lot about my body during those years. I was really excited – and I still am – about unearthing and spiralling with someone and seeing how deep in the rabbit hole we can go. But the thing is, with some people that rabbit hole is very shallow. I know I’m comfortable wearing eyelashes, glitter, all that stuff – cool. But that’s not the end. What other things can I work on? There’s always one more wall to break down. With those guys we broke down walls together but when they were done, I was like ‘oh, we have fifty million more walls to break down.’ That’s what I realised. I think going through the process helped, and that’s what serpentwithfeet is all about. Me needing permission to dig.”

Men in general have a problem with talking about their feelings and addressing their sexuality, but it feels like an even bigger issue - sometimes - for black men...

“All men need that, but specifically black men need that; we need to give ourselves permission to dig. I think black women have given themselves permission, because no-one’s going to give it to you. Black women said…which I think is what Beyonce and Lemonade and 'Formation' is all about…'I’ve been out here dancing, been out here being pretty, been out here singing and hollering for the past fifteen years, but now I’m giving myself permission to dig and to do the emotional work publically'. Black women have developed their own vocabulary…black men just haven’t done that in the same way. I think we can take a lot of cues from Maya Angelou, Oprah, Nikki Giovanni and Toni Morrison…all these women who are making intentional healing spaces. Men, we’re down to heal but we’re not necessarily going to set a meeting at 6pm on December 4th to heal. We’d be like ‘oh it’s fine if we heal if we’re on our way to work….’ And women are ‘uh-uh, we need to plan three years in advance when we’re gonna heal'. And I love that. That’s what serpentwithfeet is….intentional healing.”

So where do you want to go next with serpentwithfeet?

“I’m not tired of the name yet; also for logistics I have no reason to change it! I went through a lot of name changes before because I wanted to find something which resonated with me day after day, year after year – and serpentwithfeet stuck. Originally I didn’t use it as an artist name, people just started calling me that. It was my social media name and everyone used it, a lot! For me, though, it’s a passport and licence…permission to be unhinged and to fully unpack myself all the time. Every time I hear serpentwithfeet it’s a call to unpack, and I don’t ever wanna lose that.”

blisters is out now via Tri Angle Records