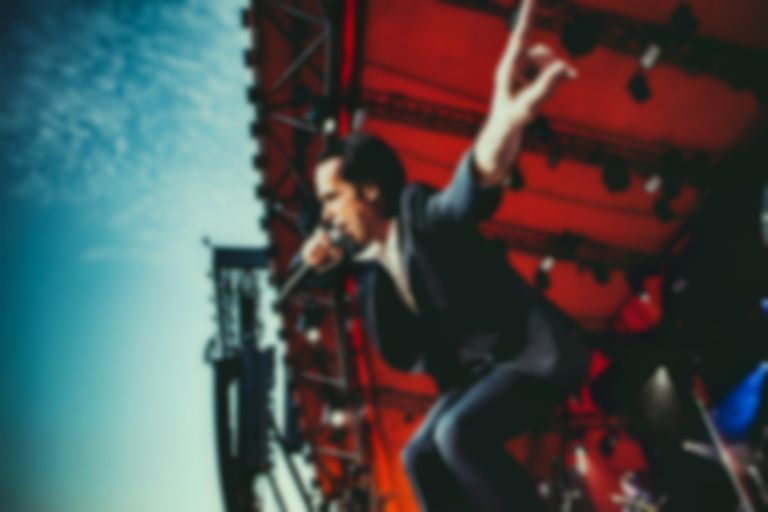 Nick Cave and The Bad Seeds have launched a Crowdfunder to raise money for their touring crew after the pandemic put their jobs on hold, and it includes a prize draw with over 100 prizes up for grabs.

A £5 donation to Nick Cave and The Bad Seeds' Crowdfunder provides one prize draw ticket, which will allow supporters to be in with a chance of winning over 100 prizes, including signed instruments from The Bad Seeds, gift vouchers, limited edition prints and more.

Nick Cave and The Bad Seeds were due to set out on tour in 2020 in support of their Ghosteen album, but the coronavirus pandemic forced the band to reschedule when it hit last Spring. In December last year the band cancelled their rescheduled 2021 tour dates completely, which means their tour crew is out of work until live events can resume.

The Crowdfunder, launched today (18 February), sees Cave and The Bad Seeds reveal that some of their tour crew have "been with us for years, decades even". They added, "Join us in showing appreciation for this awesome bunch - we look forward to the day when they can get us and the show back on the road."

Some of the prizes up for grabs include Cave's black Grinderman guitar, a signed guitar from Warren Ellis that he used on Dig, Lazarus, Dig!!!, one of Ellis' keyboards used on Skeleton Tree and Ghosteen, some drumming gear signed by Jim Sclavunos, and a bunch of art prints, charms, tickets to future shows, box sets, gift vouchers and more.

Nick Cave & The Bad Seeds are holding a draw of over 100 prizes to raise funds to help support their tour crew, whose livelihoods have been badly affected by the Covid-19 pandemic. More details and enter here: https://t.co/xGWxcBPwN1 pic.twitter.com/NEfVhqC9PQ

Nick Cave and The Bad Seeds' live crew Crowdfunder and prize draw is live now at crowdfunder.co.uk. The prize draw closes at 6pm GMT on 12 March, and winners will be notified before 6pm GMT on 22 March.