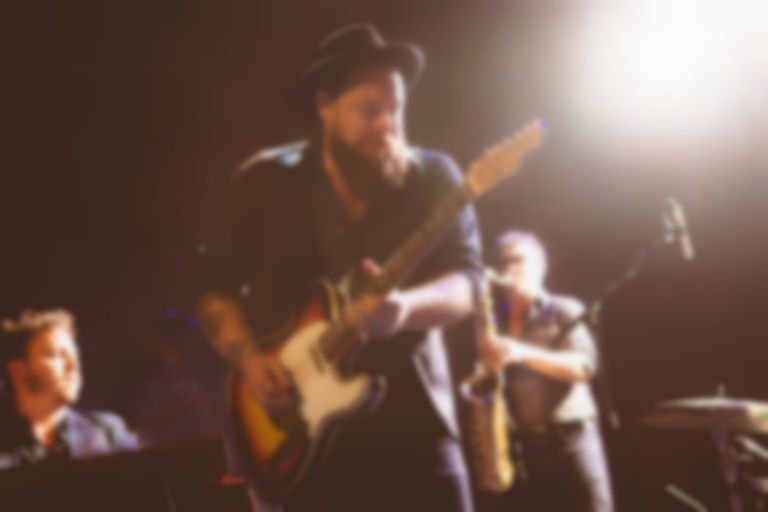 Nathaniel Rateliff & The Night Sweats saw in St Patrick’s Day 2017 with a rollicking set on Thursday night as part of Jameson’s celebrations in its founding city.

The Irish whisky brand worked with local artist Steve McCarthy on a new bottle for the occasion that draws on the fearless spirit of the city. Bringing together independent businesses and entrepreneurs, they rang in the public holiday with a raucous show.

Speaking to Nathaniel and bassist Joseph Pope III before the gig, they enthused at the prospect of playing the festivities, as well as missing SXSW. “It feels amazing and anybody that I tell back home, they kind of tell me to fuck off. Like no way, you lucky bastards.” laughed Nathaniel. “I’m a pretty big fan of history, so it’s nice to learn the history of the distillery and the brand. For years we went down to South By South West. It doesn’t really seem to be about the music anymore.”

He also praised the Irish crowds for their reception, “We’ve ended two tours in Dublin over the past couple of years. We always talk about doing just a tour in Ireland where we go to a bunch of different places, that’d be really rad.”

Jameson put together a local line up to open the show with Brian Deedy on first dropping a set of hyped folk stompers, while All Tvvins warmed up the stage with a fierce set packing nihilistic guitars and primal pop aggression.

Heralding the stage with pure whisky soaked joy and a brass section that boasted syncopated dance steps, Nathaniel Rateliff & The Night Sweats raced through a set list packed with tracks their 2015 self-titled record, spurred on by a jubilant crowd who echoed every chorus and embraced each thumping beat of polished Americana folk.

Ending with "S.O.B." Rateliff left the stage to the song’s refrain ceaselessly recounted back by the fervent crowd, who only relented once the band had reemerged for an encore.

The new whisky bottle plays on the Irish phrase to ‘chance your arm’, which originates from the Butler-Fitzgerald dispute of 1492 where two quarrelling families resolved their differences with a risky handshake through a door, henceforth known as the Door of Reconciliation.

Not so fresh from St Patrick’s Day festivities, Nathaniel and his band were due to fly back to the States to begin work on a new record. “When we get home we’ve rented a little place, and we’re all just gonna go hang out and work on songs together. I have a bunch of ideas right now and they kind of vary in styles, but definitely it’ll be focused, and what we’re gonna do is make another Night Sweats record. I don’t really wanna stray too far from what we did before, I like what we’ve been doing.”