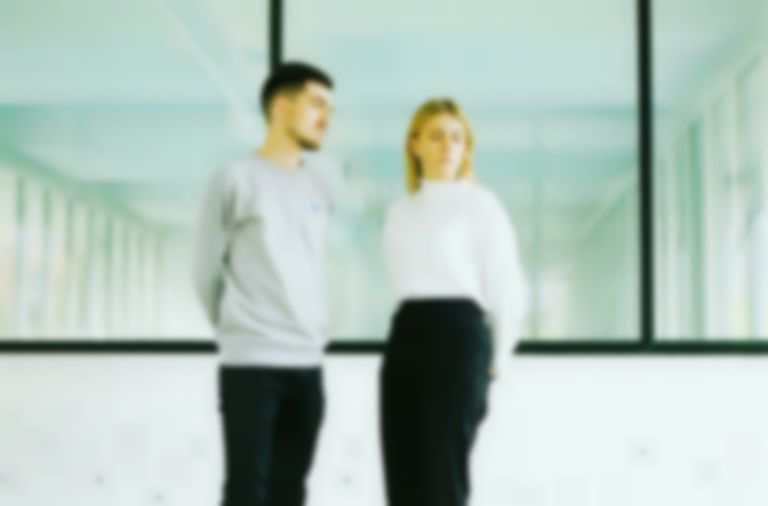 Fang Night's latest single "Steady Cruising" is a tantalising dark pop confection, and their live show sees them add plenty of new material to the mix. We caught up with the up-and-coming act's Benjamin Walker and Ewa Lefmann at their show at The Waiting Room.

It's pretty unusual for bands to throw their own club nights - how did this partnership with The Waiting Room come about?

Ewa Lefmann: We were inspired by the south London night "Steez" that a few friends were involved with, and we felt this artistic/music crossover community was missing from our home of north London. Last year we hosted a few gigs at The Waiting Room as we loved how flexible the space and staff were. The gigs went really well, so when we asked if we could host Plant x Jewel there they were really up for it. It's not often you can say to a gig venue "hey, is it okay if we cover the floor with some sort of sandy substance?" and they go "yeah sure, if you clean it up."

How did you two come to be in a band together?

Lefmann: Fang Night is our fourth band together. When we were 14 we worked on a short documentary about Finsbury Park with some friends and local film-makers as a lottery-funded after school project. We also got to write and perform the soundtrack to it, which was our first experience of recording music. From that we discovered a shared taste in music and started writing together.

Benjamin Walker: We lived together for a year in Peckham too, in a house that was falling over because the neighbour's place was collapsing into it. There were huge cracks in the wall and in winter you were basically outside. Shout out to all the landlords everywhere! We wrote a few songs there together and that became the first Fang Night EP.

Lefmann: that must have been why we started writing on the laptop, couldn't really play a guitar with numb fingers...

Walker: I think I have some recordings from when we were 14 on an old ten-track recorder that are probably the best songs we ever wrote but I can’t find them anymore. They might be on MySpace, which means they’re definitely lost forever.

If you were to describe Fang Night in brief - what would you say?

Lefmann: Lyrically a lot of our songs are fictional narratives following relationships between two people. Often the imagery is surreal and this is something we like to reflect in our visuals. Of course, our experience as young people growing up in London makes an impression on all of it at the same time, so I guess this often results in a sci-fi city pop feel.

Walker: If we make an album, I want it to feel like you’ve picked up the phone line by accident and two people are already on it, shouting at each other over the sound of really mundane noises, like a kettle boiling or a car windshield, and the songs are hidden in there somewhere.

You often mention your time at uni, would you say your degrees influenced your music?

Lefmann: I think the main thing I picked up from studying at LCC/UAL were the people I met there. On such a broad course there was just so much scope for cross-discipline collaboration, which made projects far more interesting and fruitful. This is something I've brought forward into my adult life as a designer and as a musician. You can't be good at everything by yourself. I think studying design also helps you think pragmatically about how lots of different elements can come together to create an all encapsulating experience, which we both would like to look at more in the future.

Walker: I fucked about with wheelbarrows and bathtubs for three years so I have no idea, really. It definitely influenced the way I approach making: my process now is faster and more scattergun. I make a lot of little musical experiments all at once and that habit, for better or worse, probably comes from St. Martins. I agree with Ewa though, that the people were the best part, and most of the people I met there would probably say the same thing. Someone once said to us it’s been a while since a band came out of art school so there’s that.

Who is your favourite artist of the moment - in any creative sphere?

Lefmann: We’re both big fans of Frank Ocean and his approach to all aspects of his art, music and performance, and how they all link with each other. Generally I can be a bit late to get into albums, so the one I currently have on loop is Art Angels by Grimes. I’m really into the characters she builds and the ways she captures them in various voices.

Walker: I really like the new Sampha album. Also all the artists, visual and musical, we worked with on our club night, it feels so good to pick people to collaborate with who's work you like.

Lefmann: Our friend Sam Cahalin - aka Terrapin - performed at one of our club nights, and absolutely smashed it with his electronic instrumentals. We’ve asked him to do a remix of "Steady Cruising" which we’re really excited about, and we think it could be the start of future collaborations.

It’s been a bit of time since Artificial was released - what have you been doing in the space between that and "Steady Cruising"? How has your sound developed since the release of that EP?

Lefmann: We had some industry interest behind the scenes after the Artificial EP, and so a lot of 2016 was spent dealing with that and seeing how the band could progress forward. We've learned a lot about the music industry in the last year.

Walker: It wasn’t really meant to take a year. There are now a few different versions of "Steady Cruising"; the demo was built around this drum beat and heavily auto-tuned vocals that were written and recorded in one go at three in the morning. From that we made a bunch of versions, one of which we even went to Berlin to record.

Lefmann: Eventually we worked with Oli Bayston of Boxed In and the sound just seemed to click straight away - our band nailed it in a few takes. So the initial idea and recording were super quick, but it took us a year to actually get it done.

What did you want to be when you grew up?

Lefmann: When I was much younger I wanted to be a veterinary nurse but soon realised that poo was likely to be heavily involved and I moved on from that, naturally, to graphic design. I've also always liked performing and since I started writing with Ben I’ve mostly wanted to be a musician. I’m lucky enough to have design as my alternative profession, but it would be great to find a platform to weave the two together.

Walker: A marine biologist. Not really sure why, I even picked the A-levels for it. I went snorkelling once and got over excited.

What can we expect from you down the road?

Walker: This time the gap between new music is going to be more like a month and not a year - hopefully! We’ve got loads of demos, so it’s just about sorting out which of those are workable songs and which are just poorly recorded auto-tuned moaning over beats!

Lefmann: Since this release, we've definitely been moving towards a more electronic sound. Unless something exciting comes along, we're taking a break from gigging over the summer to reassess how to make our residency even bigger and better, as well as actually getting our songs recorded and released. We’re thinking of releasing under our own label and tying that into the club night too. We get so wrapped up in how much we love performing that it's easy to forget about all the other sides of being a musician.

Any question that you wished I'd asked but didn’t?

Lefmann: I’ve been going to a lot of job interviews lately, so this feels like a very familiar trick question... I’m punctual, polite, and work great in teams.

For now, keep your eyes peeled for what Fang Night has in store - and hire Ewa!