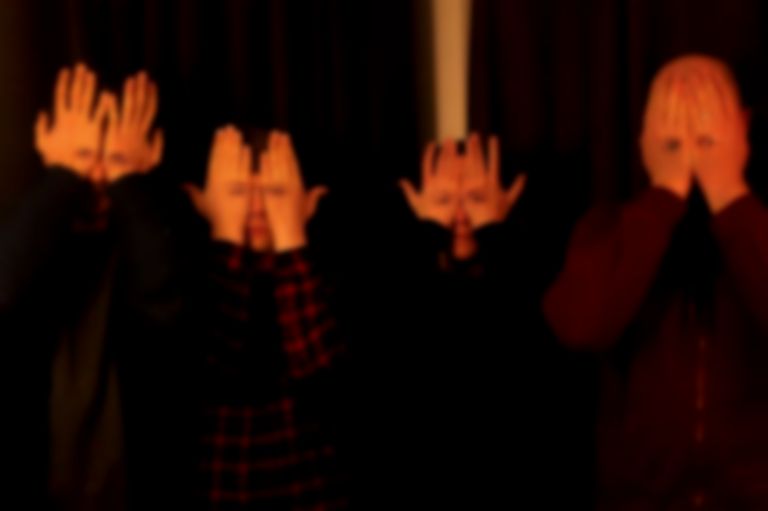 We first fell for Fresh Snow when fellow Toronto noise-niks Metz insisted we check them out back in 2012. The bands shared a split single and later formed a one-off, LOUD supergroup under the name FrETZ.

2013 saw the release of I, and a series of face-melting live shows followed. Live the band really come into their own, drawing out noise passages, locking into a groove and pushing it to the extremes. Live shows have featured the band playing in pods surrounded by projection screens or leading a procession between rooms in venues mid-show, all the while playing with contrasts of loud and quiet, subtlety and bombast, calm and chaos.

Last year the band returned with the Won EP. Teaming up with the likes of Damian Abraham of Fucked Up and DIANA’s Carmen Elle, the predominantly instrumental band added another dimension to their ever evolving sonic palette.

As their album artwork continues to follow the ROYGBIV colour wheel, the band continue to develop subtely, each new release building upon and informed by the last yet looking forward and mixing new elements to become something new entirely.

Retreating to a barn in rural Ontario with Graham Walsh of Holy Fuck at the controls, their new album One will be released on Friday. One minute a huge, heavy psych rock riff tumbles out of the speakers, the next an icy minimal piano line gives way to electronic burbles - by turns confrontational and inviting.

Insistent looping electronics build and evolve around a simple, yet hopeful piano melody. This gradually becomes less organic, twisting and contorting as layers of keyboards and squelching 8-bit synths pile up before giving way to simple handclaps and undulating bass.

It's a delicate and euphoric listen - deservedly our Song Of The Day.