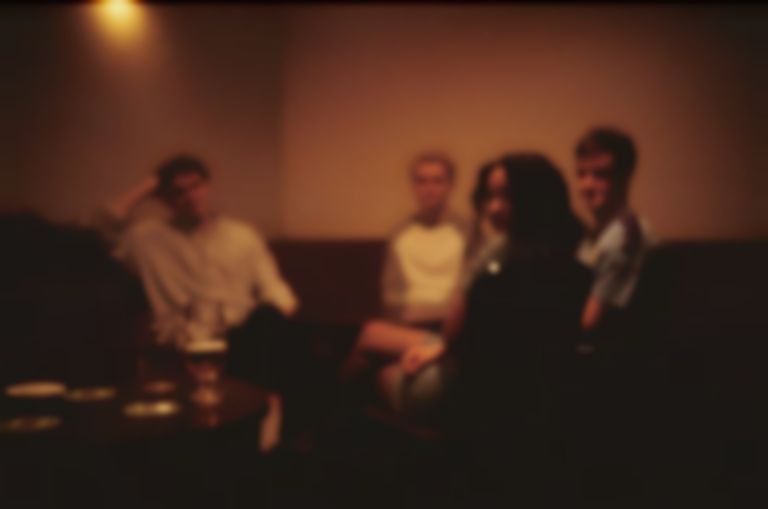 Leeds-based quartet English Teacher’s new track “You Won’t Believe How Beautiful She Is When It Has Snowed” is an exploration of vocalist and songwriter Lily Fontaine’s relationship with her hometown.

Calling on the track’s East Lancashire namesake, Pendle Hill, famed for its association with witchcraft, the cathartic new single from English Teacher looks to capture moments of anxiety and change through its lyrics and tender composition.

The track poetically references the quintessentially British oil-painting beauty of a town, whereas under its serene surface, it’s an exploration of Lily Fontaine’s identity as a mixed race woman, as well as how her upbringing in that environment affected her. “This song is about how pretty the hill is that I can see from my bedroom, but it’s mostly a reminder that moments of low self-love pass and you will feel beautiful and worthy again,” she explains. “Moving to a city for university forced me to reflect on how my experience of growing up in and around Pendle, witnessing the social, economic and political issues that exist around it in juxtaposition with the beauty of the landscape and the characters that live within, has shaped me into the artist and person that I am.”

“I think some of my own issues about self-worth stem from the experiences I had growing up as one of the only black faces in my town, but I also think those experiences fuelled a desire in me to be active in educating myself in and opposing the intrinsic and historical racism in our society and the wider world.”

English Teacher are donating all proceeds from the single, which costs just £1, to community bail funds for Black Lives Matter protesters in the U.S. “As a mixed-race woman, I recognise my privilege, and I urge those around me to recognise their own and to use it to actively oppose white supremacy,” says Fontaine.

“From arguing with a neighbour who told my brother and I to go back to where we came from aged 7, to having to write a speech for my entirely white class aged 13 on why using the word p*ki is derogatory, to having to laugh when the popular boy at school told everyone I’d be fit if I wasn’t black, to putting on Refu-Jam, a festival to display solidarity with and raise funds for refugees aged 18, to significant local criticism; I’ve seen and fought racism, despite my privilege as a mixed-race woman.”

“I found the stories of the semi-rural small-town much more interesting and much more important to talk about than the tired old conversation on romantic love. Pendle Hill is such an iconic element of living in and around where I grew up, so it was inevitable that I dedicated a track to it. It’s a bit of a hat-tip to the Romantic movement that I learned about when studying Frankenstein, as well as a reminder to the sad and the reclusive that the bad times pass, and they are worthy of admiration.”

Displaying the band’s versatility, it’s a departure from their first single, “The World’s Biggest Paving Slab”, under their new name (previously FRANK). “You Won’t Believe How Beautiful She Is When It Has Snowed” is still experimental but with heavier, more alt-rock vibes, in part perhaps thanks to ​James Sanger​ (​The Cure, Manic Street Preachers, Brian Eno)​, who recorded and produced the track during a crowdfunded ten-day session at his Normandy studio.

This evening (3 June) English Teacher will take over Best Fit’s Instagram at 6:30pm BST for the Off The Road series, talking about their new single and playing live.

It costs just £1 to purchase the single, and the band will donate all proceeds between community bail funds for Black Lives Matter protesters in the U.S. Find out more about the charities here.

“You Won’t Believe How Beautiful She Is When It Has Snowed” is out now. Find English Teacher on Facebook and catch them on Best Fit’s Instagram for Off The Road tonight at 6:30pm BST.