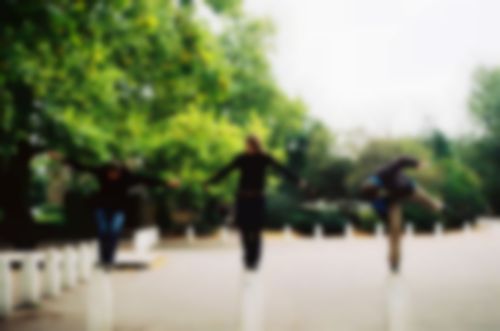 Shy Sheffield-based trio Standard Fare write and perform their quirky punk-fuelled guitar-power-pop with a heart-on-sleeve honesty that is as awkwardly endearing as it is charming. Their tales of crumbling relationships and tortured separations are delivered with a dead-pan frankness, pitched merrily on a ship of irresistible melodic fun. Bassist, lead vocalist and unlikely Fleetwood Mac-fan Emma Kupa met guitarist Danny How and, after recruiting drummer Andy Bez, the three moved to Sheffield to discover indie-pop. After gigging their way through 2010, with slots at SXSW and Indie Tracks festivals, the band won hearts and heaps of praise for their debut LP The Noyelle Beat. TLOBF asks them about fancying fifteen year-olds, writing love songs and their new “sonically upbeat and lyrically dark” single ‘Suitcase’ (watch the video below), which is out on Monday 7 March.

How would you describe your sound?

Danny: We started off calling it a punk sort of sound that was mixed with some of the more melodic influences that were coming through.

Emma: Now we call it indie pop because everybody else does.

Emma: No, they’re not! But particularly on the albums Rumours and Tusk, they write short songs that keep your attention the whole way through. They’re also really honest about what they are saying, talking to someone as if they are there.

A lot of Standard Fare lyrics sound pretty honest. Tracks from the album such as ’Fifteen’ sound very real. Is this an important part of your music?

Emma: I’m pretty honest when I write songs. ‘Fifteen’ is about a five minute experience of being attracted to someone a lot younger. I wrote it when I was 22. A couple of months later I was just playing around with the guitar and wrote it dead quickly because it didn’t really mean much to me. It was a bit jokey, but I’m surprised more people haven’t picked up on that element to the song – most people seem to have glossed over it.

How does it feel singing so truthfully in front of an audience?

Emma: It feels weird singing it now because I have to sing “I’m only 22″ and I’m actually 26 now. That song was about four years ago.

You’re most popular song at live shows seems to be ‘Philadelphia’ . Where did that one come from?

Emma: That was about a friend I have who lives in Philadelphia. I just realised that I had seen her every year and wasn’t going to see her for a while. I started off trying to write a song about climate change, hence the first line “Global warming is getting me down”, but then it just turned into a song about missing someone.

You released several singles in 2010 and recorded an LP in just six days, not to mention playing a string of gigs both in the UK and abroad, including a slot at the SXSW festival. You seem to work fast…

Emma: Yeah but we had written those songs five or six years ago, so it’s been a long time for us. But we are having to write faster now because we want to get something out this year, so we’re pushing ourselves to do it.

Do you write songs as a band, or do they all come from individual band members’ experiences?

Danny: There’s lots of different ways – it depends on the song and everyone is different. Sometimes we each bring the ideas to the band and things grow from there. Sometimes it takes a bit longer.

Your new single ‘Suitcase’ is out on Monday, and has been described as your most “sonically upbeat and lyrically dark” music to date. Despite singing about preparations for a nuclear fall-out, it comes with a surprisingly uplifting animated video. How did that come about?

Emma: The animator got in touch with us after she’d come to some gigs, and asked if she could work with us. So when it came to doing the video we proposed her to our label and they said “yeah great”. We gave her some ideas, told her what the song was about, some of the lyrics and some influences like Persepolis and Maus – graphic novels that are a bit dark. She’s taken a slightly light-hearted and different view of the song.

What sort of reaction has ‘Suitcase’ had at your live shows?

Danny: It’s gone down well. We’ve played it at quite a few gigs now and we’re getting a lot more comfortable with it, people are getting into it. Generally we’re getting more confident with what we are doing and the songs we are playing…

Emma: …When we played at the Indie Tracks festival last year, loads of people who we’d got to know over the last year – promoters, writers, gig goers and other musicians, were all smiling at us.

Although you’re not originally from Sheffield , how has being part of the city’s music scene helped you as a band?

Andy: When we moved there to practice we got more involved with it and some of the bands there, such as Nat Johnson and the Figureheads, who we started to gig about with quite a bit…

Emma: ..And we sent some music to Darren at Thee SPC and he was the first person to like us and show us this indie pop scene that was going on. He got us some gigs, so we weren’t having to play in random line ups with heavy rock bands in empty places. Suddenly there were people who liked what we were doing.

Are there any other new bands on the Sheffield scene who’ve influenced you or you are fans of?

Emma: There’s a band called The Bon Bon Club – they’re good fun. They’ve got one of the girls from the Long Blondes and they do dark all-female covers of random songs. You should look them up, for a covers band they are really interesting.

So, what’s next for Standard Fare? More gigs and festivals?

Emma: It’s all up in the air at the moment.

Any plans for more records in the near future?

Danny: We’ve done a bunch of recording for another album, so that’s what we are focusing on.