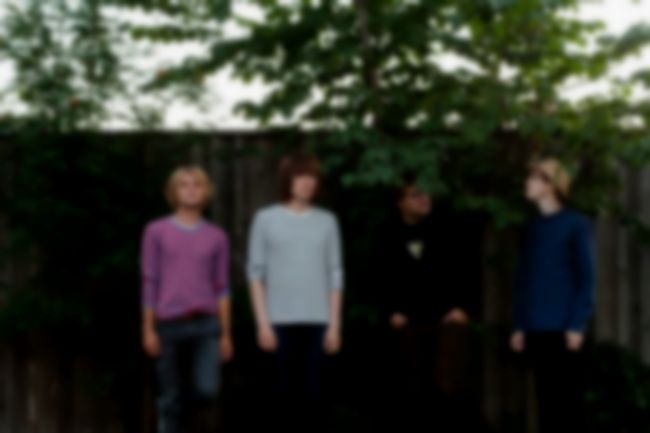 Up and coming Finnish fuzz-rock band The New Tigers are set to hit London on 25 October, as the Ja Ja Ja Nordic Music showcase returns to see the finish quarter play alongside Ólöf Arnalds and Mikhael Paskalev.

The New Tigers weave a form of frosty, blurry shoegaze-tinged rock, packed with sweetness and needle-pricking riffs, altogether creating some of the freshest sounding music to escape from Scandinavia. Drawing upon the Velvet Underground and My Bloody Valentine for their oodles of fuzz, they are set to astound London next week and start rapidly acquiring a fanbase this side of the North Sea. We quickly chat to the band before their arrival, about where they’re from, where they’re going and that iconic Nordic sound.

What’s the story of The New Tigers? How did you get started?

It all started back in 2006 when we were celebrating Appu’s brother’s wedding. We just thought it would be cool to play some fuzzy-sounding rock’n’roll, and in contrary to the usual “let’s form a band in a party yeah!” we actually got together and started making music. It took some time to get the wheels properly rolling, but since 2010 or so we’ve been quite active in making music and doing gigs and all.

How would you describe your sound to someone who’s never heard you before?

It’s fuzzy, surprising, melodic, atmospheric. As we’ve been telling people already for quite some time, the music of The New Tigers sounds like you were sitting next to a jet engine and listening to 60′s pop on a walkman that plays the tape slightly too fast. That still holds true, we think.

Your debut was released here over the summer – was that an exciting time? What kind of a reaction did the record receive?

The album came out in Finland a year ago, and then got its worldwide digital release in July. In Finland we were really pleased of the reception of the album. After working with it for a quite a long time not thinking about what others will think of it, it felt really good to hear that people really liked it! It gained some very positive interest from around the world too. Last summer we released a split 7″ vinyl with a great Swedish band Top Sound. We cover each other’s songs on it.

You’re playing the Ja Ja Ja event in London towards the end of October, do you have any big plans for London?

Well, you’d have to think the usual suspects, afternoon tea, Big Ben, the Queen and the like. But yeah, excited to pay a visit there! And we have some friends around there, so cool to get to see them as well! And of course Ja Ja Ja is a cool club and it’s really exciting to get a chance to play there.

Have you been to London before? What was it like the first time/what are you expecting from the city if you’ve not been?

Some of us have visited London as tourists, but it’s the first time for us to rock the city. Hopefully it doesn’t rain the whole time!

Pretty straight forward rock show, music wise. Because our album was basically recorded live in studio, we sound a lot like it. But we tend to play the songs differently every time, sometimes long sometimes short. We are not very uptight about how our shows are; we just go with it and see what happens. We think it’s a lot of fun, hopefully it’s fun to listen to and watch also. We also always try to throw in a surprise or two, last week in Turku we had an awesome overhead projector show! I guess the airline wouldn’t be too happy if we brought the projector to London, but we’ll see…

What’s your take on the music scene in Finland? And Scandinavia as a whole? What was it like trying to get yourself out there?

Finnish indie seems to be quite hip these days. There are some cool bands coming up, including some from the label we’re on, Soliti. We weren’t really concerned about getting our music so public in the first place, we just thought that once we got the album ready we’d search for someone to release it, and Soliti was the first label we contacted.

Do you think Turku and/or Finland have had a big influence over the music you make? Are they good places to be in a band?

Yeah, I don’t know if it would sound the same if it was made somewhere else. I’m sure the climate and the colours and the seaside and the people and all that have some kind of an influence on how we sound – I think that’s pretty natural. As a band Turku is a good place to be. The heart of the Finnish the music industry may be in Helsinki but we have a nice scene here and good places to play in, and lots of friends who play music too. And actually, maybe it’s good to be slightly away from the music biz centre.

Some people have said there’s a distinct style to Scandinavian music. Do you agree? If so, what do you think are the hallmarks of the style, and if not, why not?

Maybe there are some similarities, mood wise, and maybe that’s for geographical or climatic reasons. That’s all that comes to mind. I think all the Nordic countries have kind of diverse musical heritages, but maybe there’s some kind of a vibe that comes through it all.

Why do you think that Scandinavian music is so popular in the UK?

Is it? That’s great news! Maybe the lyrics are interesting for the British, because they are written by people who don’t have English as a first language.

Which bands and songs have had a big influence you?

A year ago we were asked to name our three biggest influences, and we ended up with Velvet Underground, Jonathan Richman, and the Loveless album by My Bloody Valentine. We still think that’s quite a good set to describe the approach we have on music sound-wise and attitude-wise. Of course all of us have their own personal favourites, so everyone brings something of their own to the palette.

If you had to describe The New Tigers in 3 words, what would they be?

What are your ultimate ambitions for the band?

To make good records, play a lot of live shows in many places, have a long, productive career with good artistic quality and variety.

A couple of weeks ago we started recording our next album, so that should be a big thing for us next year. We’re also hoping to be able to play in new and exciting places!

The New Tigers will play the Ja Ja Ja showcase on 25 October at London’s The Lexington. Also appearing is Iceland’s Ólöf Arnalds and Norway’s Mikhael Paskalev . For more information about the showcase, head to the Ja Ja Ja Facebook event page, and tickets for the gig are available here.