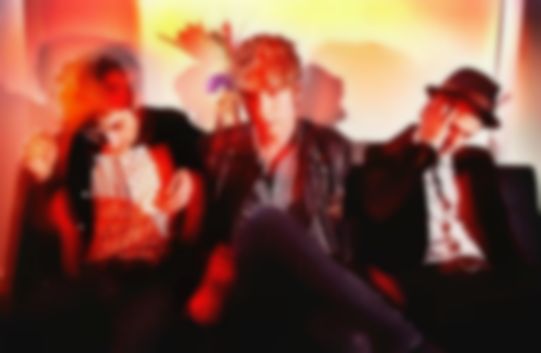 Despite being slightly tarnished by the work of Black Rebel Motorcycle Club, a trio of leather-jacketed young men playing rock and roll remains one of the enduringly thrilling prospects in music. So the discovery of young Danish band Shiny Darkly and their self-titled debut EP rather excited us here at Best Fit, and we’re pleased to report that the music more than matches the aesthetically-pleasing aspects of the band.

Hailing from Copenhagen, Shiny Darkly’s influences are there for all to see and hear: the gloom and psych of The Doors and Velvet Underground, the modern gothic of The Horrors, and the rock and roll intensity of Jesus and Mary Chain, The Stooges and contemporaries The Black Angels.

On Shiny Darkly (more darkly than shiny, to be honest) the band goes from the jammed-organ drone and guitar rumble of lead track ‘Into the Shade’, to the yelping assault-on-the-senses of ‘He’s Suicidal’, to the skeletal terror of ‘Diana (Do Drugs)’ with stylish ease, and every moment on the EP is visceral, fresh, and brilliant. So it was with great pleasure we caught up with Copenhagen’s best new band to find out a bit more about them.

Hello Shiny Darkly, tell us about the band – who’s in it?

Shiny Darkly is a band consisting of three guys. We started the band last summer. It’s a simple constellation with Kristoffer Bech on Vocal and guitar, Mads Lassen on drums and Oliver Matthew Volz on bass. When we play live we have an extra man, Kristian Marstal, he plays an old vintage synthesizer. We are all good friends who like to be loud and noisy.

Where does the name come from?

We didn’t really put that much in to it. In the beginning it was just “Shiny Dark.” It has a clear contrast between two atmospheres. Those two words seemed to pop up several times so we just decided to put it that way, and with a “y” ending the two words – it was just a bit catchier.

Who are your influences? I can hear Velvet Underground and The Stooges but also 80s British gothic or post-punk, some Jesus and Mary Chain, and even the sounds of more modern bands like The Black Angels and Women….

Yeah. The influences are bands from the 60s psych/garage scene like The Doors, Velvet Underground, 13th Floor Elevators, Stooges to the late 70s punk scene with bands like Joy Division, Television, Echo and The Bunnymen to the goth/noise 80s with bands like The Cure, Spacemen 3, Jesus and Mary Chain. Also bands from today like A Place To Bury Strangers and The Black Angels, just to point out some known ones. We like bands that also share the same influences from the past. Our inspirations are pretty wide.

You’re from Copenhagen; does that influence your sound in any way? If we go to Copenhagen, what should we not miss out on?

In many ways, we are inspired by the youth in Copenhagen and some of the lyrics deal with the raw feeling and the nerve that the youth has. That being the harsh nightlife or just the common feelings we all share. The subculture over here is not that big, but those who share the same music and vibe are very dedicated and Copenhagen has some cool venues for that. You can always find them if you’re interested enough.

Tell us about your label, Crunchy Frog; how did you get signed?

Crunchy Frog is one of Denmark’s older labels. They have a scene for more alternative/indie rock acts. We sent their booking partner Bobkat agency a demo hoping to get some gigs. The next day both Bobkat and the head of Crunchy contacted us, suggesting we should meet and talk about a possible record deal. We were very psyched about it considering their cool rooster of bands and the fact that it isn’t often they take bands in. We were like “fuck yes,” and then we recorded a vinyl single one month after

With songs like ‘He’s Suicidal’, ‘Diana Do Drugs’ and ‘Draculala’ you could say the band seems attracted to the darkness, is that fair?

Yes. We like the dark atmosphere. Darkness always has a certain and interesting energy.  A lot of our songs deal with the gloominess in the young human’s heart. We seem to reflect that in our sound easily.

There’s quite a distinctive sound to the band and the records, where do you record? Do you use vintage gear, or take advantage of modern production?

We recorded our EP in a little cool trashy studio (Jens Benz Recording Studio). It was all recorded live on an analog tape recorder with a few dubs. All the instruments were played one take throughout the songs with vintage gear. It was all very impulsive and raw.

How has your music been received outside of Denmark? You’ve played in London I believe, how was it?

We thought playing in London was a good fit. People were very interested in our sound and we had some good talks. They were quite positive. In these days, when we look at our band sites, we’ve noticed that more people from both UK and other countries have taken an increased interest of our music. We are very thankful for that.

Just how many leather motorcycle jackets are in the band?

Can we expect to see Shiny Darkly over here in the UK any time soon? How about a full-length album?

We hope so. We are actually working on a tour. If everything goes right we’ll see you in the late summer months. We find the scene in the UK very inspiring and to play there would be amazing. That is for sure. We are planning to start working on the full length after we’ve played the summer gigs ahead of us. We hope to release the album during spring next year.