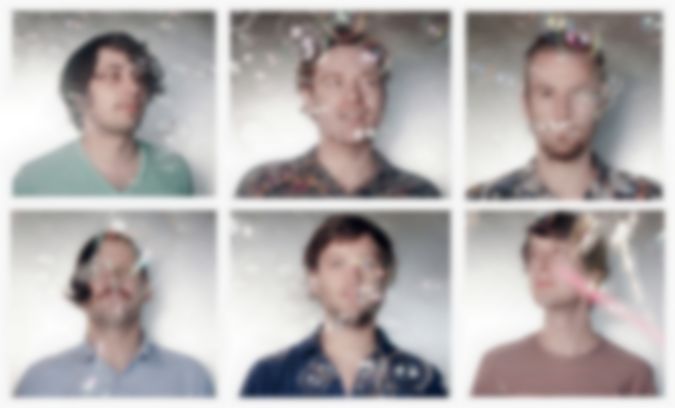 It all started with Grimes. Let’s call it the ‘Grimes Effect’. The Toronto-based singer’s individual take on electro-vocal music caused a storm and led to renaissance of the Canadian music scene which many saw as stagnant since, well, Bryan Adams and Nickleback. With subsequent bands like Doldrums, Majical Cloudz, Moon King, and labels like Arbutus and Arts&Crafts gaining momentum, the musical output from Montreal and Toronto gave us an interesting analysis into what exactly makes a specific city more disposed, and even encouraged, to musical experimentation. From this, however, we’re left with an East Coast/West Coast divide that is normally reserved for U.S gang culture, without the violence. But what about the stuff in the middle? The icing in an Oreo cookie is always the best part.

With Canada’s expansive landmass middle provinces are often overlooked. Travis Bretzer and Blue Hawaii are from Alberta, but what about the Prairie provinces? Known for the legacy of The Guess Who, and The Weakerthans, Winnipeg, Manitoba has become a slow-burning melting hotpot of the arts, with music taking a new direction that eschews the electronic leanings their neighbouring provinces and the punk/garage rock West Coast sensibility. Meet Royal Canoe. A multi-instrumental band that sounds a bit like Yeasayer, Vampire Weekend, Beat Connection, and Outkast with the falsetto of the Temper Trap all rolled into one sailing vessel. Their eclectic, densely layered sound is something you can see being created in an school art room when you can’t fathom facing the -40 degrees C (with wind chill) weather outside.

“Winnipeg is so far from other major cities you have to be pretty hard-working and resourceful to push your stuff outside the city perimeter,” says Royal Canoe lead singer Bucky Driedger via email. “The weather does play a role in creating the city’s unique identity, with the sub-freezing temperatures in the winter giving people a sense of resilience and gumption. You have to create your own fun.”

Royal Canoe formed in 2010 when founding member Matt Peter, working under Co-Op Mode, was on a quest to find musicians to translate his songs into a live setting. Piece by piece, and meeting at various gigs and events in Winnipeg, the band came together, first rehearsing the tracks the starting to write new songs. “The big influences at the genesis of Royal Canoe were Beck, The Knife and Outkast,”explains lead singer Bucky Driedger. “Beck’s Midnight Vultures is a great example of blending electronic and acoustic instruments with amazing samples, vocals and synth tones. The Knife pushed us to use a lot of vocal effects such as our octave pedal.” The result is an eclectic array of cosmic country, reggae and psych jams, with songs on the band’s sophomore release Today We’re Believers showcasing Driedger’s extensive vocal range, with the falsetto taking center stage.

“Outkast are genius. One thing we took from their songs was stacking huge octaves in our vocal lines,” Bucky explains, “with me singing a high falsetto octave, Matt in the middle and an octave pedal rumbling in the bottom. They have these really thick, huge choruses that way. We were also listening to a lot of hip hop in general, which really influenced the way we built the rhythmic aspects of our songs.” In addition to guitars and keys, the band has two drummers to make sure that no beats are out of place.

A six-piece band requires a different set of self-imposed rules, and a need to be technologically astute when it comes to songwriting and recording. “We have a hard drive that lives at our rehearsal space that we can all work off of”, says Bucky. “I might go one day and create a bunch of samples and build a drum loop. Then Matt might hear that and then add a chord progression or a weird sound. We build it up from there in groups of 2 or 3.” What first stands out when you hear Royal Canoe is the layering of their sound: a rich, dense instrumentation attests to the multi-faceted, and collaborative nature, to their song writing approach. Tones play a huge role as well, with a single sound or atmosphere dictating the lyrical and musical direction of a song. “We just love experimenting and creating textures we haven’t heard before.”

“Once the song is further along we will all get together and democratically make some decisions about the overall arrangement, maybe move some verses around or whatever. We don’t write a lot by jamming, but things kind of just form over time. We don’t always have rules, but sometimes giving yourself some rules helps you to try something new. Like forcing yourself to make a groove in 7/8 or picking a random BPM and having to create a song at that tempo.”

Over the years, the band has honed in on their sound. “I think we realized the types of things we liked to do songwriting and production-wise and how to work to together to achieve them,” says Bucky. “Lyrically, the first batch of songs we worked on were usually from the perspective of imaginary or loosely real characters. The songs are now are a lot more personal.” The Royal Canoe sound can be best explained as a nomadic tribe. “There is an ethos that keeps them all together, a narrative that binds them, but their scenery and collective experience keeps changing.”

With a no-laptop rule at concerts, recreating the band’s complicated sound can be challenging. But with six people manning pedals and instruments, there are plenty of hands to go around. A lot of things have to happen. “Each person has to do a number of things in one song. It’s like a little dance or game,” Bucky explains. “You know that on a certain beat you have to quickly turn one knob an inch, kick a pedal and flip a switch all while singing a rhythm that is completely counter-intuitive to your instrument part. It’s a challenge, but we love the challenge. It’s what keeps playing these songs every night so exciting and fun.”

Alluding to their hip-hop influences, rhythms feature prominently on new Royal Canoe album Today We’re Believers. Songs start with a rhythmic idea and are the built on top of that. Although they were responsible for what Bucky calls “the most misogynistic anthems of our time”, the influence of 90s hip hop artists like Dr. Dre, Warren G and Snoop Dogg give Royal Canoe a subversive edge to their music, imbuing tracks like “Light” and “Summersweat” with a sense of Williamsburg circa 1989 versus present day Winnipeg.

Royal Canoe’s layered arrangements mix with propulsive kinetic rhythms, a sort of well-contained cacophony, are a representation of the burgeoning Winnipeg cultural scene that has exploded over the past few years. The Prairie city has strong reputation within the visual arts, (ie. Marcel Dzama) with artist-run centres like Plug-In, a new Institute of Contemporary Art, and warehouse music spaces popping up throughout the city creating innovative new opportunities for the creatively inclined to mingle. “There are a handful of people that are starting to be visionary and opening up really awesome new businesses and meeting spots, like Union Sound Hall and Parlour Coffee, which is very exciting to see,” says Bucky.

“There’s not a huge segregation between the film, visual art, theatre and music scene. And even within the music scene, there is not that fragmentation between the folk/roots, indie or whatever. It’s a very supportive community, both in terms of financial assistance in the form of government grants and moral support and advice from other bands.”

Does the constant reference to Canada start to wear thin after a bit? “We don’t get tired of it. Lots of people just have no idea what Winnipeg is like or sometimes even where it is. We are proud of our city with all of its beauty.”

Royal Canoe will be touring in the UK this Autumn.