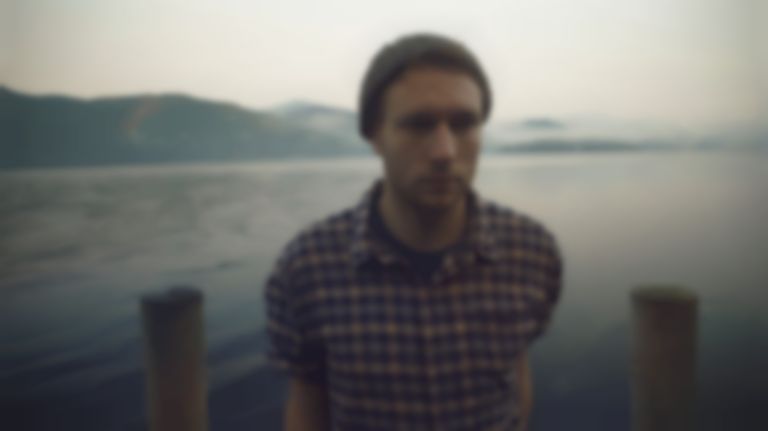 ​Picture rural Wales. Somewhere about an hour or two from the nearest town. Somewhere on the edge of a deep, dark forest or somewhere that’s perched just next to a vast expanse of the Atlantic. Find that place and you’ll come close to finding the landscape that shapes Novo Amor’s music.

The Cardiff based multi-instrumentalist, better known to family and friends as Ali Lacey, brilliantly capture vast, melancholic scenes with his latest EP Woodgate NY. Blending his gentle vocals with guitars, banjos and the odd suspended bathtub (he also happens to be an experimental sound designer) Lacey recently signed to Brilliance Records, a small indie-folk label based on the west coast of Norway. Following his debut release, we sat down with the man himself to find out more about making music from everyday objects, how to score a movie and what that mysterious name means.

You started out working as an experimental sound designer, do you incorporate a lot of those instrumentals in this latest EP?

If I’m experimenting with an interesting or unusual object and it makes an original sound then I’ll try to include it when making a track – in “Holland” for example you can hear the sound of an old garden hose being hit with a hammer. Whatever I think will give an added bit of interest or texture. Once you get the hang of it it’s quite a straight forward process. Each object makes a certain sound so once you’ve worked out what that sound is you can then pitch on a keyboard, and from those collections of sounds you can begin to construct a melody.

How do you get started as an experimental sound designer?

It was a bit of an accident really. I kept experimenting with different objects to see what use I could find for them. I remember once I bought this toy piano off eBay, took it apart and removed these twelve different rods each of which had its own tone. I then attached the rods to a guitar so that every time I played the strings if would sound one of the notes that had previously been part of that piano. I feel like it gives things more of a cinematic quality.

Did you have to take any formal training to become an experimental sound designer?

I did a music tech course when I was younger, but nothing that specific. It was really useful in teaching me the basics – how to record and mix sounds – but this is such a creative process that I don’t know if it can be taught as such. It was more of an exercise in learning how to apply the skills I’d been taught. Most of it you find out how to do through experimenting with everyday objects - take the drum beats for example, they’re made from thudding a hammer against the base of a strung up bath. You can’t worry about the instrument, whether it’s going to get broken or whether you think you’ll be able to recreate that sound again. You just need to start working and not get too precious about it. If something gets damaged you have to accept that as another part of the process. If I were trying to make this EP from scratch again I don’t think I’d be able to recreate the same sound, it’s a lot of happy accidents.

Do you think this is something you’ll look to include more as you develop? Perhaps as part of your live performances as well?

Definitely, I’m going to start work on an album soon, but before I do that I want to spend time playing about with a load of different sounds to see what I can create. I want something that sounds original.

Have you ever thought about scoring a movie?

Yeah absolutely – I actually wrote “From Gold” for a film produced by a friend of mine, and the feedback was really positive so I decided to collect a few tracks together and publish it as an EP. Film scoring is where my music comes from. I want to create music that has a really visual element to it. It feels like a very natural evolution for me.

Do you find it easier to write music by retro-fitting it to movies you’ve watched or books you’ve read?

Sometimes it works that way, it very much depends on the mood of the movie. Sometimes I just like sitting down with a blank canvas, a completely clear mind, and just start composing from there.

Where do you get your inspiration from? It feels like it has quite a rural focus, does the countryside have an impact on your music or is it more internal that that, kind of getting away from it all to look inwards for direction?

I love getting away to the countryside, especially when you live in a big city, that change of landscape is just so inspiring. The title for the EP, Woodgate, is named after a place in upstate New York where I spent a lot of time and had some really great experiences all of which has informed this release. Taking time to get away from home is by far one of the easiest ways for me to get inspired. If I can find somewhere remote, spend some time alone reflecting on things, that’s when I tend to find writing music comes most naturally to me.

How did you go about getting signed to Brilliance? Do you think they saw a connection between the type of music your producing and the remote countryside in Norway?

I actually approached them because I wanted to go with a label outside of the UK to see where it would take me. I think the type of music I’m producing fits well with the mountains and the cold – it’s got quite a Scandinavian feel to it, so yeah that may well have played a part in it. I would love to go out there and play a few gigs at some point, that’s definitely a goal I’m working towards.

What does the name Novo Amor mean?

It’s Galician for ‘new love’ – it kind of represents why I started writing music. Two years ago I’d just gone through a break up so I turned to song writing to channel it into something creative rather than feeling down about it.

Do you think it’s hard to write new music without that kind of emotional tumult?

I suppose that could be true, I totally get that, if you have a side of your life that’s not working out so well it definitely gives you a lot of material. I feel like struggling artists always produce stuff that sounds more authentic that an artist who’s comfortable. There’s just much more of an impetus to write.

Do you think your music captures that sense of struggle?

Possibly, I didn’t want it to be too bleak but it’s certainly not that uplifting either. I suppose I was trying to go for something a bit more epic, but it definitely does capture something quite melancholic. I do like bleak music, but I find it can be quite distracting if I’m listening to someone as it starts to influence my music. I prefer to approach my writing as if it’s a blank slate, so often I won’t listen to much else whilst I’m composing.

The Woodgate NY EP is out now on Brilliance Records. Novo Amor play St. Pancras Old Church on Thursday 8 May.