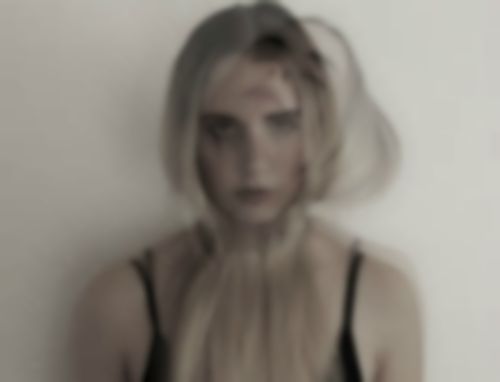 If any one thing could speak to the nature of Denmark’s Karen Marie Ørsted’s musical output, the photo above wouldn’t be too far off the mark.

A split personality of sorts so far resulting in the hip-hop beat driven, glitchy and industrial electronic landscape of ‘Pilgrim’ and the warm synths, noodling guitars and sultry Lana Del Rey vocals of ‘Maiden.’

With only these two songs to go on, a bidding war erupted which recently resulted in MØ signing to Sony for the Scandinavian territories. Considering how long it takes some bands to get signed you have got to know that these two tracks speak volumes about the songstress’ vision.

To find out a bit more we catch up with “the Danish Grimes“ ahead of her appearance at JaJaJa’s showcase.

The moment I listen to my first CD… I got it at my 10 year old birthday. It was Spice Girls – ”Spice”. I wanted to be like them and started a band with my girlfriends the day after.

How would you describe your sound to those that had never heard of you?

Where did you grow up?

At the countryside in a little town called Ubberud outside of the 3rd biggest town of Denmark, Odense. I love that place.

Do you come from a particularly musical family?

No, not really – my mom is a schoolteacher and my father is a psychologist. But my Grandfather was an artist, a painter, and since he was the ”artist” in the family, I think he must have been the one writing songs to the family parties and so on back then… But he wasn’t a musician like that.

What did you love listening to as a kid?

Spice Girls, Cher, Sam Cook, Ray Charles, Frank Sinatra and The Doors. Then I became a teenage punk, and then it was: Sonic Youth, Nirvana, Yeah Yeah Yeahs, The Clash and The Smashing Pumpkins I adored the most.

What do you love listening to now?

Do you feel like your surroundings influence your sound?

Where else do you find inspiration?

Who’s your favourite frontman/woman of all time?

The combination of Ray Charles, Kim Gordon and Karen O.

Can you tell me a bit about your creation process?

Most of the time I write a song on my grand grand grand mothers piano, record all the vocals and send them to the excellent producer Ronni Vindahl who takes it from there. Then, when we have agreed on a certain kind of direction and production, we get together and finish it. Other times I get a raw beat, and then I work around that, until melodies, lyrics and form, and then I get together with the producer(s) and finish it.

What do you think of the Grimes/AlunaGeorge comparisons that seem to constantly crop up?

It makes me very happy and proud that people compare me to these two brilliant acts! I’ll do my best to live up to it! I see some similarities, but not overwhelmingly many, which is meant in a good way – it would be a shame to have too much of the same candy.

What kind of live set up can we expect at Ja Ja Ja tonight?

A DJ sampling and controlling the elements, a guitar player (played by my producer Ronni Vindahl!) and a black & white sync visual show. Yeah, and then me going crazy on the stage hopefully losing my voice in excitement.

There are only a couple of tracks of yours available to listen to at the moment, can we expect more of the same strong pop/hip-hop inspired creations in the future?

Yes, I would say so. It’s the same vibe, a lot of the same elements, the same universe in lyrics, and it is also still me singing so, yeah, I think so. But we have also experimented quite a bit in the studio, so hopefully you won’t get to be bored when the album drops!

I’m working on two new tracks – one with my primary producer Ronni Vindahl, who is co-producing every track on my forthcoming debut album. The other track I’m working on at the moment is with the amazing Danish producer ELOQ.

Who is your dream collaboration?

Uuh, that would be Major Lazor, Twin Shadow, Blood Orange or SBTRKT!

To drive in the sweet wind of the highways, playing my music for the world.

Ja Ja Ja will take place on Thursday 29 November at its home of The Lexington, featuring performances from Denmark’s MØ, Finland’s Sin Cos Tan and Norway’s Highasakite. Tickets are £5 in advance and can be purchased here, and for more information on the event, head over to Ja Ja Ja November’s Facebook page.