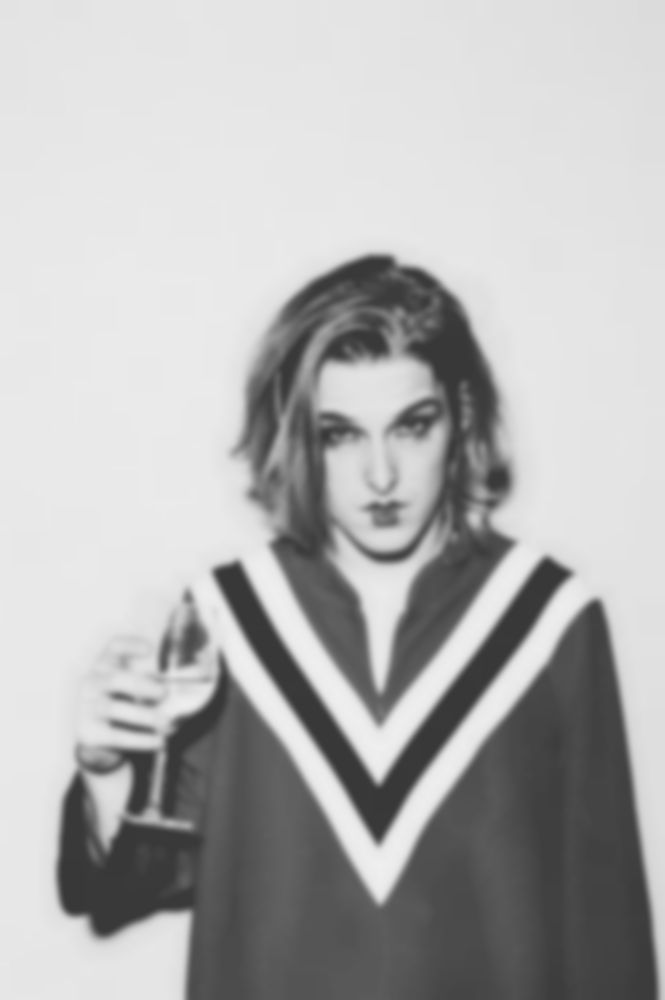 -A month or so ago I reviewed the debut album from Foxygen drummer Shaun Fleming’s new project, Diane Coffee. It was a pretty favourable review – 7/10 for what’s a really promising, interesting, but above all very immediate and likeable album – but his bandmate in the former, Jonathan Rado, didn’t take too kindly to it: “OMG foxygen seem so crazy in this REVIEW of SHAUN’s record! They SEEM like such DICKS! (good record though).”

Okay, I did note it had been something of a turbulent year for the band and suggested that Fleming might be better off pursuing his musical career away from Foxygen, but, y’know…come on.

Anyway, Diane Coffee’s My Friend Fish is a fine collection of three-minute pop songs which touch on new wave, garage, psych and folk music, and came together at a time when 26-year-old Fleming had just moved to New York City and ended up confined to his apartment with a particularly bad dose of the flu. Amidst songs about girls sung in Fleming’s ragged, bluesy voice (channeling Tom Jones at one point), there’s also a few tender moments where he sings about wanting to take care of someone, or to be taken care of, and countrified moments which point to a bright and varied future for the project. I caught up with Shaun recently to find out a little more about the recording of the album, and even decide it’s worth broaching the thorny issue of Foxygen once again…

Hi Shaun, how are you and where are you?

Shaun: I’m doing quite well. We are currently driving across Wyoming on our way to Denver.

It’s been a few weeks now since the release of My Friend Fish. Are you happy with how it’s been received so far?

Yes, thrilled! I’m just happy people are enjoying it as much as I enjoyed making it.

Can you take us back to the point where you decided to make a solo record? Was it always your intention to do something like this?

I wouldn’t say I set out to write an album. I had two weeks off in between Foxygen tours and writing has just always been something that has made me happy. Ever since high school, it’s been a dream of mine to release the stuff I’ve produced. It just so happens that the songs that came out of those two weeks felt pretty good together. I connected with Western Vinyl and My Friend Fish was born.

Why choose the name Diane Coffee – I assume it’s a Twin Peaks reference?

It’s actually not a Twin Peaks reference at all. “Mr.Coffee” is the name of a song by this singer songwriter named Nathan Pelkey who never was. The fact that “Mr.Coffee” had a female first name was partially due to the fact that I was studying into the masculine vs feminine archetypes and how they played into my own personal life.

Do you “become” Diane on this record, rather than it being Shaun Fleming?

I guess you could say Diane is the embodiment of my theatrical feminine side. I feel as though I pull from “Diane” more in the live performances than the album, however, she was most certainly in the mix.

Was moving to New York City a big influence on writing the record?

Absolutely. Travel has always been inspiring for me.

I believe you were rather ill after moving, and the album came as a result of being cooped up indoors – was it difficult then to write and record in those confines? And was it purely made by yourself?

Fish was created out of isolation and loneliness. The place I called home was dark and cramped. The fact that I knew no one in the city and with a nasty flu taking hold caused me to completely shut in. I was a fish in a fishbowl. When it was decided that the album was to be released, I went back and had a few friends record over the original tracks, like Rado’s chaotic synth in “New Years”. If I’m able, I’ll always try to have my friends add something to my records.

As a drummer, how do you approach writing – does the percussion come first?

I never really considered myself a drummer. I only started seriously playing on the first Foxygen tour. Until I wrote this record, I would always start writing with an acoustic guitar. For Fish I actually started by just laying down the first drum line that came to mind. Everything was based on that feel.

I can hear a lot of 60s influences on My Friend Fish, from Donovan, to psych rock, to the Beatles…but also some new wave moments – what music influenced the record, and also what music did you listen to as you grew up and then began to make music?

I grew up listening to folk guys like David Wilcox and easy listening artists like Marc Cohn. They were my first big inspirations. Obviously in middle school I discovered classic rock: Beatles, Bowie, Pink Floyd… They all helped shape my song writing. During the recording of Fish I was jamming a bunch of Feist, Salem Al Fakir, Damien Jurado, a bunch of Motown, Eric Whitacre, Chairlift… I really pull from everywhere.

There are a lot of food references on the album; soup pops up a couple of times and sriracha makes it into a song title – what’s going on there?

I was so sick and shut in that I didn’t go shopping much. I was living off chicken in a can… I was starving. Just had food on the brain.

I hate to bring it up…but what’s happening with Foxygen at the moment?

So Foxygen is currently out West recording the next record.

Do you mind the band being brought up in interviews and reviews? I did mention Foxygen in my review of the record and did highlight the recent “dramas”, and Jonathan Rado wasn’t backwards in expressing his view on my review…but I get the impression that you guys – you and Jonathan in particular – are still very close, right?

ALL of us are incredibly close. And for the record, we have never NOT been close. We’ve had a tough year, yes, but Foxygen is still very much alive. I love all those guys, they’re my family. I can’t wait to hit the road with them again. I truly don’t mind people bringing up Foxygen. It’s a big part of my life. That would be like leaving the album name out of a record review.

Back to Diane Coffee – what’s next for you? Do you want to keep it going and make more solo records? Will you use your own name in the future?

This is all I’ve ever wanted. I plan on releasing as many albums as I can. Whether it’s still under the name Diane Coffee… Only time will tell.

My Friend Fish is out now on Western Vinyl.