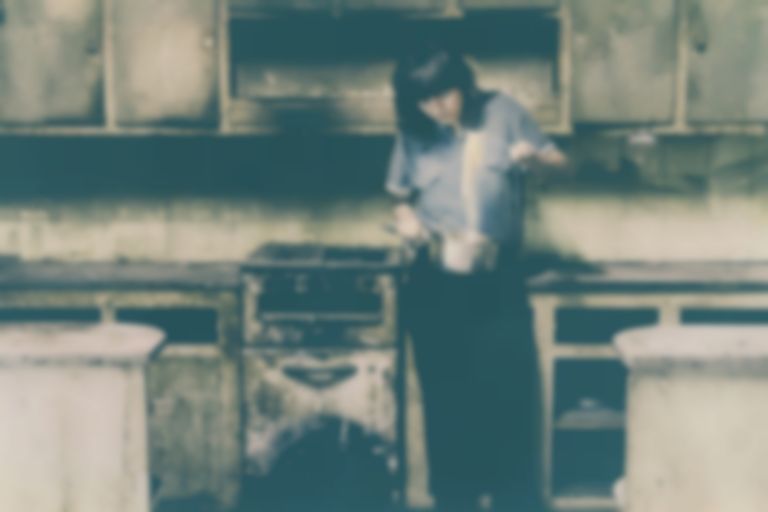 I first saw Courtney Barnett a little over a year ago when I was in Brisbane for the annual BIGSOUND music conference. Her songs were chaotic but idiosyncratic. On the same trip I’ll admit, I visited the Neighbours set in Melbourne. It’s what any true Brit would do, right?

“Wow, that’s so weird,” laughs Courtney from a pub around the corner of The Old Blue Last where she’ll later play to a packed out room. While Courtney’s earlier tracks showed promise, if not a little naivety, it’s her more recent songs “Avant Gardener” and “History Eraser” that find her standing firmly in her own stead somewhere between a more romantic, less-hipster Jeffrey Lewis and an equally romantic, less-stoned Soko.

“I don’t know if this is true…” She lowers her voice, “But I hear that someone from the show, one of the guys from the show is on the tour because he’s one of the famous characters or whatever, coz you go to the pub at the end, right? Apparently, although maybe don’t repeat this because I don’t know if it’s really true, but apparently he just picks up all the chicks.”

I tell her that’s a rumour that circulates just as freely this side of the world, along with other such classics as Harold Bishop having a filthy mouth and Susanne Kennedy being a lesbian with a lot of tattoos. “I’ve heard that about someone weird,” she exclaims. “Like the Queen! Have you ever seen her arms? They’re always covered up.”

So now we’ve found common ground in our cultural staples, it’s on to America. At twenty-five this autumn jaunt is Courtney’s first trip outside Australia aside from New Zealand. After a short stint in LA she played to large crowds at CMJ in New York before a few days in London ahead of Paris. I ask for her first impressions of the US. “When I got my money, because I got it in hundred dollar notes, I was like, fucking hell. And then I learnt slowly about what you’re supposed to tip, blah blah blah. And then every time I did it I would get paranoid that I was tipping my hundreds instead of my ones.”

“Australian money is like, foolproof. No matter how drunk you are, no matter how dumb you are you know that pink is not worth much, and green is worth a lot. So yeah, that took me a while.”

But with a full press and tour schedule, Courtney admits she hasn’t had much of a chance to see the sights aside from The Natural History Museum and a midnight trip to Big Ben. Instead she’s been busy promoting her A Sea Of Split Peas Double EP - a combined collection of her earlier work, with her first EP where she “was using loop pedals and just made up words on the spot, so that was shit and not much thought went into it”, and the following collection that she “probably spent more time doing.” That’s the one with “History Eraser” and “Avant Gardener”, aka ‘the hits’.

However, Courtney is looking to all fresh material for her debut album proper. “A lot of people get really funny about that, just even the fact that I did it that way – the two EPs. Like, what does that mean? Well, nothing really!”

“But then it’s scary because I just like people to release things. I said this yesterday and I think I used PJ Harvey as say the White Chalk album – it kind of feels like that was her mucking around with songwriting techniques or just different stuff, and then Let England Shake was next. I love her as an artist because you see that whole journey and maybe you don’t like the album in the middle, when she was just using a saxophone and a flute or something.”

But in a very fast musical climate, do people really give new artists the chance to develop in such an organic way? “Obviously part of me is going to worry about it because you have to sell enough to get to be able to tour and to be able to make the next one, so you’ve got to be sensible in some element. But like, I reckon at the end of the day, that’s what you should do.”