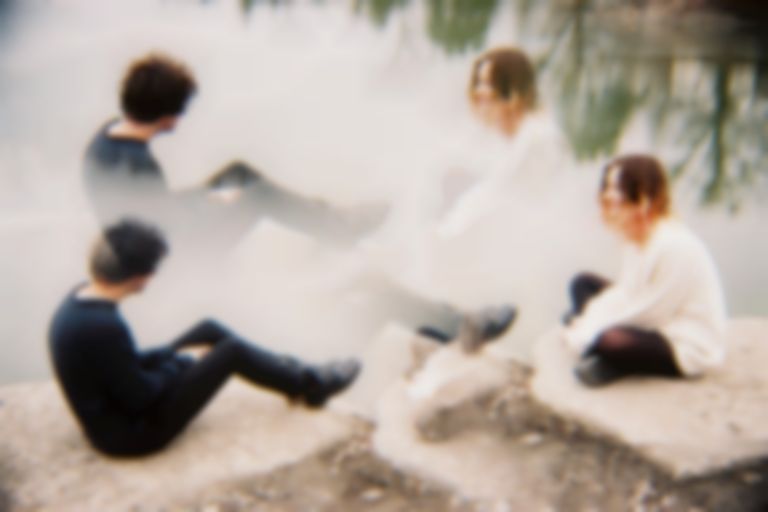 Beliefs do shoegaze right. Since forming in 2010, Toronto’s Jess Crowe and Josh Krody have been making dreamy pop music, rich with thick, crunchy guitars and feedback overtones that confidently do justice to the musical genre. Signed to No Pain in Pop (home to Doldrums, Forest Swords, Grimes) in the UK and Hand Drawn Dracula in their native Canada, the duo create tunes with propulsive drums, hazy vocals and narcotic imagery that will take you across distant landscapes and recall forgotten memories.

Since releasing their debut EP in 2012 and following up with their self-titled LP in earlier this year, Beliefs have been captivating dream-pop aficionado’s with their fusion of The Jesus and Mary Chain, Slowdive and My Bloody Valentine with a DIY, punk Toronto attitude. While not playing in the band Jess runs the hair salon Lebel & Crowe, while Josh manages the great Candle Recording Studio, which has had its own fair share of formidable acts passing through (Owen Pallett, Austra, Fucked Up, Rituals, and Metz to just name a few). All of their music is self-produced at Candle, giving them an exploratory freedom to push the boundaries of vocals, droning guitars and drums to create a new, narcoleptic, alt-pop sound.

We spoke to Jess and Josh hot on the heels of their first European tour, just after they were pulled over and drug-dogged in Germany. Thankfully, the policemen were up for a laugh and got themselves on the guestlist for Beliefs next gig. Their first show was also in a German petting zoo. We can only imagine the smells.

How did Beliefs meet?

Jess: Josh and I met at our old bassist’s birthday party. My old shoegaze band had just broken up the year before and I spent that time aggressively learning guitar, so when I met Josh, I was already writing what would later become “Gallows Bird”. Josh came to me with “Iron Streams” and we started writing together. Before we even had a full band we hit the studio to record those two songs and things went from there.

You guys also shared similar musical interest, which is why you guys started talking to each other at the party.

Jess: Both of us draw a lot of influence from bands of the mid-80′s and early 90′s like Sonic Youth, Slowdive, Jesus and Mary Chain, My Bloody Valentine. But we don’t want to sound like a repeat of that era so we are constantly trying to still keep a new approach.

The band was signed to Hand Drawn Dracula and now is with No Pain in Pop. How did that come about?

Jess: Tom King (who runs the label) was in Toronto writing descriptions for bands at NXNE and stumbled on us randomly. He was quite taken with the band (we know his flat mate had to hear our record on repeat that first while) and decided to sign us before going home to the UK.

That’s pretty exciting. The label is really drawn to artists who approach genres with a new, unique angle. What’s your creative approach to music?

Jess: Josh and I usually write the skeleton to a song and bring it to the band. I wrote all of the lyrics on the first record but Josh is writing half of the second. Live, we tend to be more energetic than most would suspect!

People seem to think Beliefs are quite a serious, academically-driven band – a bit existential. Not saying that you guys aren’t smart, but you both are a bit comic in real life.

Jess: I think we make honest music, not necessarily serious music. People often comment on our moodiness in tone, and maybe a bit in image, but we write music for all occasions of our lives, not just the depressing ones. Our main goal is to have some diversity in energy both recorded and live.

Much has been written about the current scene in Toronto right now. Have you noticed any changes or new directions artists are taking?

Jess: There are so many amazing bands to see and play with in Toronto right now. It’s insane. We just caught up with Moon King here in Belgium, it was really nice to see people we knew on the road.

Josh: There are so many good bands. Everyone plays in a band or probably has 3 of them, myself included with Breeze and Wish. Everyone supports each other because you all play in different bands and everyone likes all kinds of music. Your friends in their metal band might come to your country rock band’s show and your friend’s garage-rock band will go to your friend’s 80′s synth set, or whatever. We try and play with as many different types of bands as possible to give Beliefs a bit of diversity. We just did a split set with Greys, who sound nothing like us but we love each other’s music and wanted to collaborate together. Some of the bands I recorded/produced with at Candle we play with a lot with, like Elsa, Rituals, Moon King, Greys.

Toronto must have a lot of venues to accommodate so many bands.

Josh: There’s an endless number of venues ranging from all different sizes and vibes. You can get away with playing in Toronto quite frequently, especially if you’re a new project. It can be costly and hard to tour outside of Toronto though, but overall I love being in it. North By Northeast is great, we love our label Hand Drawn Dracula and there’s some others we support and enjoy a lot – like Mike Halichuck from Fucked Up’s label One Big Silence and Daps and Buzz records. HSY and Odonis Odonis are favourites to play with as well.

This is your first time in London and the band are playing some pretty reputable venues here, like The Sebright Arms and the Old Blue Last. Do you know anything about them?

Jess: I’m clueless, but people keep on being excited for us!

Do you have any preconceptions about the city?

Jess: Everyone is wasted, everyone is cool, everyone wears nice boots, every one has a bowl cut, everyone is on ecstasy, but the accent isn’t as romantic sounding as in the movies.

Your debut LP, Beliefs, was an album full of fuzzy, shoegaze moments and a lot of smoke imagery. As you’re currently writing a new one, has the fog cleared to reveal some new inspirational influences and themes?

Jesse: The fog has cleared on some songs and settled into others. I think this record will be more cohesive, but won’t lack range. I’m feeling a lot more comfortable with playing and writing as time goes on and I am willing to take more risks.

Josh: This time around will be a more of a full band effort (we currently, and for a while now, have drums, bass, 3 guitars and 2 vocals) and we’ve been playing a handful of the songs in our set so I feel like we all have more of our own part and not just me trying to layer guitar after guitar idea. I’ve been recording a lot of bands (at Candle Light) this past year, to the point where I haven’t heard a lot of the more talked about bands outside of my recording/writing world in Toronto. But at the same time, I’ve been exposed to a lot of music hands on and its made me more confident of I want to do and don’t want to do musically with Beliefs.

With the band taking off, will you have to give up your day jobs soon?

Jesse: I own a hair salon, so I have the ultimate freedom!

Josh: At the moment I’m in the studio as much as possible so I can afford to be in Toronto doing what I love to do, and be able to do this band and go out and tour. It would be amazing if we can start touring more often and I can do slightly more selective and larger projects, but I have such an amazing studio that my partner and I built and run. I get to record so many great projects and Toronto is my home, but we both want to travel more, especially after being on this tour. I’ll probably never stop recording projects for me.

Beliefs is out now via Hand Drawn Dracula Records, Manimal Vinyl and No Pain In Pop.