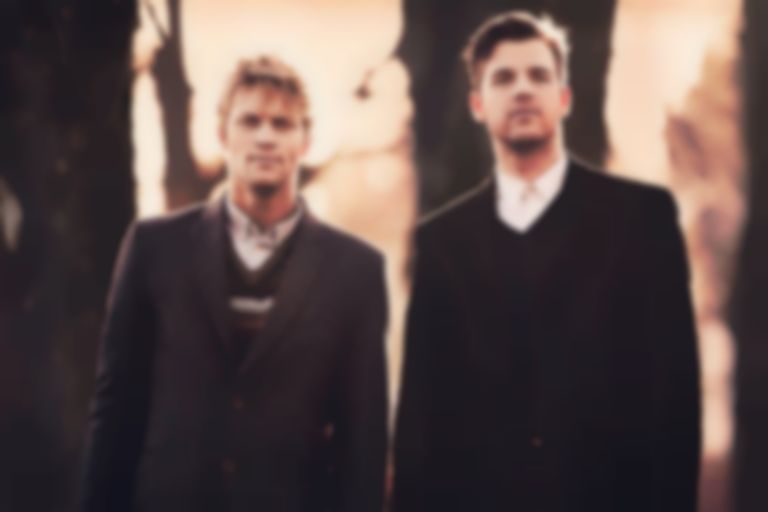 Norwegian dreampop duo Alfred Hall are one of three fantastic artists lined up for the next Ja Ja Ja performance on 30 May at London’s The Lexington. They hail from a farm in Drammen, dividing most of their time between assisting with general farmly duties and being full-time students, yet somehow, in the midst of their already hectic lives, they found time to start writing and recording music.

Comprising Bjørn Tveit (vocals and guitar) and Hans Thomas Kiær (guitar), the pair conjure a euphoric style of pop, utilising natural falsetto reminiscent of ethereal Danes Mew, and a barrage of astral synths, twinkling guitars and sublime melodies. There’s a wild streak to their sound – they seem to perform music that fits into the background of frosted forests and rolling mist, and they harbour a subtle dark streak despite overt pop hooks and youthful gaiety. Even with a faint darkness, they still manage to be kings of the uplifting summer sound – the darkness is less evil, more pensive reflection, as behind the glitz, there is a real heartfelt core.

They’ve already released a debut LP in their home nation (though nothing has got an official release this side of the North Sea yet), Wilderness. It’s a record brimming with sweetly shining indie-pop earworms and choruses to rival those of fellow Scandinavian Sin Fang. They’ve spared no expense on production, and the result is a highly polished collection of affecting pop extravagance, where every tune is more jaw-dropping than the last. Tracks like ‘So Bright’ and ‘Safe & Sound’, two of the record’s singles, are signs of great promise in the sprightly pairing.

We had a brief chat with Bjørn about the project, their album, and what bandmate Hans is keen to show off on stage at Ja Ja Ja…

What were your musical beginnings?

Hans and I started making music the summer of 2009. We were working on Hans’ farm in Drammen whilst listening to lots of good music on our iPods, and we just decided we would try to make something ourselves. The first months we just messed around with some covers, but at the end of the year we’d made out first song.

Have you always aspired to be musicians?

No, not at all. I got an electric guitar at the age of 14, so I knew a couple of chords. Hans was a bit more green, but now he has prevailed.

How would you describe your music to someone who’s never heard you before?

What music influenced your sound?

It’s hard to really choose any particular artists, because there are so many. But if I have to mention a couple I would say M83‘s album Saturday = Youth and Local Natives‘ Gorilla Manor.

Who is Alfred Hall?

Alfred was a farm-hand that used to work on Hans’ farm some hundred years ago. He used to charm the ladies with his guitar in a large hall in the house.

We’re both big fans of the melodic, reverb-y side of the genre.

What do you think is the most important element for a great pop song?

A hook that is addicting, but not in a struggling way, if you know what I mean?

How did you write and record ‘Safe & Sound’?

‘Safe & Sound’ was written at home in Drammen last March. I recorded a demo in Logic, and it was originally called ‘In The Water’. It was a couple of BPMs slower and had some more toms in the hook. We recorded a new version, as it is now, at Tinnitus Recording in Bergen last fall.

What was the process for creating Wilderness, your debut LP?

When we signed up to make an album, we only had ‘No Need To Go’, ‘So Bright’ and two half finished demos ready. We had a lot of work to do, and spent most of our spare time trying to come up with new melodies, at the same time struggling with some of the old demos. A couple of the unfinished songs came together just days before deadline, and I think they turned out pretty good.

Did you come up against any obstacles? How did you resolve them?

Our biggest issue was finishing some of the early demos. We were so used to the way they sounded at this point, that making changes to them almost seemed impossible. I remember sitting up all night the last days of recording, then going to school, before heading to the studio to find out whether last nights creation would work.

What was the most rewarding part of the process?

Maybe when you’d made a song you yourself could listen to for 40 times without growing tired of it!

Have you been pleased with the reaction it’s received so far?

We’re very pleased with the reaction. A lot of people have left a lot of good feedback, and that truly makes us happy.

How do audiences respond to the material live?

Usually people are smiling whilst shaking their hips softly. Talking to people after the shows they are always very positive and even say they think we should play some of the songs several times.

What track is the most fun to play and why?

Our favourite is ‘Lose That Gun’. I really like the groove and just enjoy singing it. It also has a keyboard solo.

I really like when I see smiling people in the audience who look like they’re really enjoying themselves.

Have you played the UK before?

We played Liverpool Sound City May 2nd and Breakout at The Camden Barfly. We didn’t really know what to expect, but we really enjoyed them both. Considering we haven’t released anything in the UK yet, we were very happy to see that some people had showed up.

Are you excited for playing Ja Ja Ja?

Any surprises in store?

I think Hans Thomas has some new dance moves he’s eager to show off.

What are you plans for the summer?

We’re going to start writing some new material, and hopefully having some time off as well. We’re both full time students, so it’s going to be very nice to not worry about exams.

Do you have any festivals pencilled into the tour diary?

Yes, we have: so far Hovefestivalen and Holmenokken (in our hometown, Drammen).

Ja Ja Ja will take place at The Lexington in London on 30 May 2013. Tickets are £5 in advance and available via this link. To find out more about the event, head to the Ja Ja Ja Facebook event page.