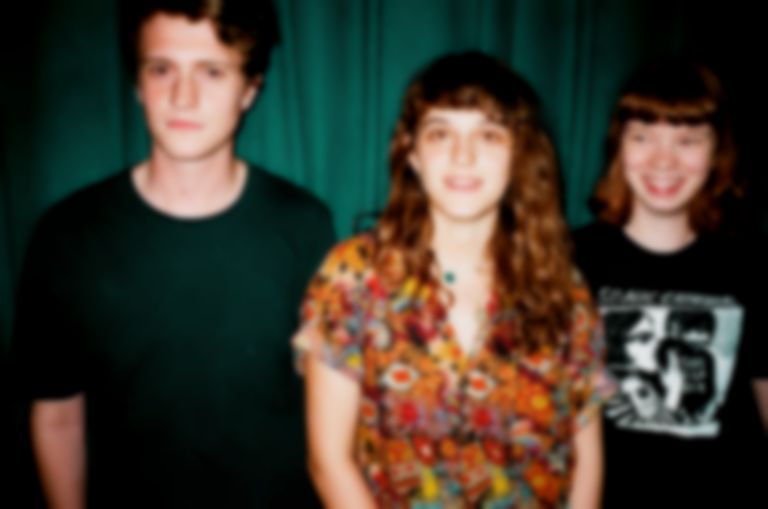 Brighton lays claim to one of the most fertile music communities in the country and few labels have their finger quite on its pulse in the way Cannibal Hymns do. Having already launched Dream Wife and Tigercub in their short history, it feels like the thick, foggy garage-rock of trio Our Girl will be the next to break from their stable.

Their Cannibal Hymns bow “Sleeper” set the tone in late 2015, its whiplash riffs and anxious drumming instantly holding hands with Sunflower Bean and Twin Peaks - now they’re taking the next step with a full EP release, Normally. Frontwoman and guitarist Soph Nathan's - also of The Big Moon - lyrics punch harder on its lead track “Being Around” than ever before: her ode to the importance of having people who care about you. It’s not easy to convey such wistful gratitude when surrounded by guitars this deliciously thorny. She pulls it off.

The whole four track EP was knocked out in a day with Blood Red Shoes’ drummer Steve Ansell; I asked Nathan, bassist Josh Tyler and drummer Lauren Wilson a few questions about the shotgun recording process and their trajectory under the Our Girl banner.

How did Our Girl come into being in the first place? What were you all doing prior to this?

Soph Nathan: I was studying in Brighton with Josh and playing guitar in a few different bands with various friends. I had some songs and really wanted to find people that wanted to play them with me! Josh and I started playing together in my old basement, which we called the dungeon cause it was dingy and musty and spikey and dungeon-like. We went to a proper practice space for our first time meeting and playing with Lauren though, and we fully formed that night! I already knew she was an awesome drummer and we'd made email friends beforehand in which she taught me to like lots of bands I should have already known and liked, like Thee Oh Sees.

A good number of songs on Normally have a root in emotional distance. Was there any specific moment which triggered pen-to-paper on writing these tracks?

Nathan: These four songs were all written over a period of two years, so they're kind of varied in terms of what they're about. "Two Life" was written first, and feels kind of like a snapshot of my feelings during a change in a relationship that was incredibly important to me. The songs are generally about my relationships and friendships with people, and I guess they follow the ups and downs of them! Some of them are about when you feel far away from people, and that emotional distance clouding your judgement of things. I think the newer songs express a bit more of an indifference or a dismissal towards that feeling though. An "ah fuck it, don't waste your time worrying, it's gonna be fine" feeling.

"Being Around" is the most hopeful track on the EP, focusing on your positive relationships - who would you say is the most important and influential person to you?

Nathan: That's a big question. There isn't one person, and many people inspire me, but my best friend Luce who I refer to in the song inspires me lots. She has the warmest heart. She's also very practical which is inspirational because problem solving and DIY are both cool.

Josh Tyler: Very big question. I'd say it's all of my friends I'm lucky to have around me. And a big variety of different musicians I take very positive inspiration from every day.

How was the dynamic with Steve Ansell throughout the quickfire recording process? Is there anything different or interesting in the way he works compared to other producers?

Lauren Wilson: We had so much fun with Steve! We initially went in thinking that these might just be demos for the EP, as they were just recorded in a practice room, all of us together including Steve and the mixing desk. As soon as we heard what Steve had captured we fell in love with it and knew we had to use these recordings as the final thing. The was no pressure, we felt so relaxed and it meant that the best music came out of us. He was able to capture exactly what we sound like, it felt really honest. I remember one part of a track Steve had to actually climb under the drum kit and hold my snare, so it wouldn't buzz around in a really quiet part of the song, then he let go and quickly get out the way when the drums came in!

You're involved in a couple of projects at the moment, what's the most important thing for you in terms of Our Girl's development?

Wilson: We're working towards the album. I always find recording quite a strange process. Every time we record I feel like we learn a lot about ourselves and us as a band, so I'm really looking forward to seeing what an album brings out in us.

Normally is out 18 November on Cannibal Hymns.