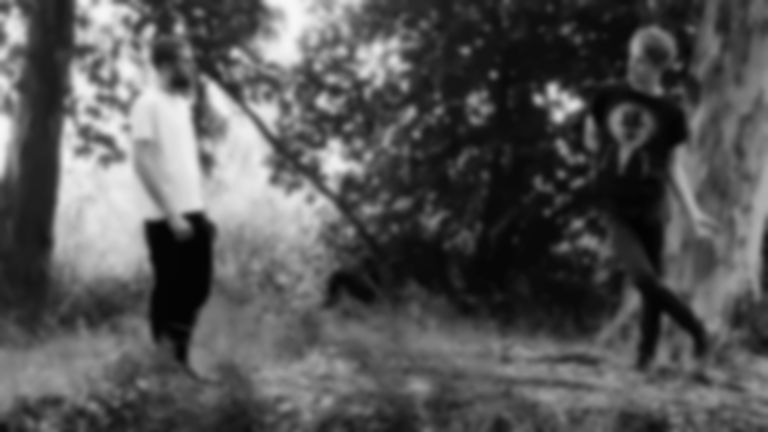 Recorded over the space of three days in Penha de França in Lisbon back in 2017, The Peri Peri Samplers is a distinctive experimentation in what can happen when language is set aside and "Do Menino Deus" comes as the first mind-bending taster of what Kiran Leonard and Ubaldo have in store.

Or Sobre Blau is a name born from mis-translation and the complexity of language. It's a term that is a literal Catalan translation of the Portuguese idiom "ouro sobre azule", which means "blue over gold" in English and equiavalent to "the cherry on top". Yet, in Catalan, the phrase barely means anything at all.

The choice of band name perfectly depicts the background of the creation of the project, which was punctuated by miscommunication from a mixture of broken English, Catalan and Portugeuse. It is somewhat apt, therefore, that Kiran Leonard and Ublado leave the guitars to do the talking.

The resulting project is one of mystery and magic, where guitar melodies entwine in the most mystic of ways whilst the surrounding soundscape seems to bend inwards into their twinkling conversation. Listening to "Do Menino Deus" is akin to walking through a forest at the dead of night; an experience is at once beautiful and startling, but where surprises lurk around every corner. It's an unpredictable exploration of what can happen when you jump headfirst into the darkness.

Explaining the creation of the track, Leonard says "We pieced together this track, and the cassette as a whole, from various studio and live recordings made while Andreu and me lived together in Lisbon. We were living in our rehearsal space opposite a large graveyard. The graveyard on Alto São João has a very well-maintained central promenade, but its vast outskirts are eerie and rundown. The bodies of families with no living descendants lie in their dilapidated mausoleums. The stained glass is smashed, coffins are splintered, bottles are broken over altars. The names of all these tracks, which Andreu selected, are phrases in Portuguese with a Catholic bent. I like them because they remind me of the bleakness in that cemetery; the weird perseverance of its dark, devout language over people that are dead and structures that are in ruin."

The Piri Piri Samplers will be released digitally and on cassette via Memorials of Distinction on 22 March 2019 and available to pre-order the cassette on Bandcamp.