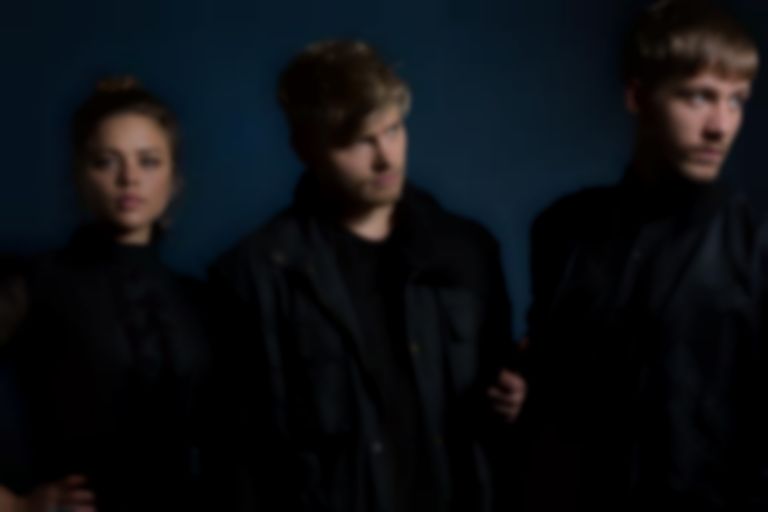 Danish three-piece Noréll have dropped their debut track "Howl". It's a co-write with label mate Kill J and as such it's predictably brilliant.

Made up of singer Marie Louise and producers Nichlas and Viktor, the trio met by chance in Copenhagen's Østerbro area and quickly set about crafting their sound. "Howl" is the first fruits of this collaboration and it bears a lot of the hallmarks their fellow Dane Kill J is famed for. The track takes from R&B and pop, but the main attraction is the aggressive electronic snap of the beats and synths alongside the prowling caged tiger vocals of Marie Louise.

"Howl" takes no prisoners tonally or lyrically, with a focus on desire and consequence that's reflected in the powerful nature of the music. We caught up with Noréll to find out a bit more about the trio, and you can also listen to "Howl" below.

How did the three of you meet?

Nichlas: We met at a performing arts school where Viktor and I studied electronic music. Marie Louise was involved with rock bands at the time, we saw her perform and found ourselves curious as to how her bold, distinctive voice would sound over some of the electronic music we were working on.

Marie Louise: Viktor got talking to me about it all after a concert, I’d recently been to see The Knife and was inspired to make a change, so began making music with Viktor and Nichlas immediately.

Can you tell us about "Howl" and what it's about?

Marie Louise: The song is about desire and acting on your primal instincts setting everything else aside. It explores the duality of the hunt and how you often feel that have lost some part of yourself once you are satisfied.

Viktor: For us as producers, we knew that we needed to pack a punch to fit the overall universe. I think there is a lot of toughness and a lot aggression in the track, keeping it tight and simple.

Nichlas: Yeah, I think that a lot of the music being played in Denmark right now, either has a kind of ironic distance to itself, like everything is a joke or it’s kept so safe and correct, that you have 10 bands sounding exactly the same. This track, and our music in general, is us trying to make something that is unapologetic at its core. It’s pop and it’s big and it’s loud and it’s supposed to make you want to move! But it also has depth both in terms of the production and the lyrical universe.

Viktor: It’s like it is not ok to play super catchy pop and be serious at the same time. You are either trendy, casual and cool or you are the funny guy just playing on mediocre catchphrases and offensive stereotypes. We really want to change that.

Who are your influences?

Marie Louise: I do not think we have one influence as a band that we all agree on? I grew up with a lot of different music and it’s sometimes hard to tell what shows and what doesn’t. Some of the strong Nordic ladies for sure but I also listened to a lot of rock and metal.

Nichlas: Daft Punk would be my biggest influence early on. They definitely got me into producing. Loved how they could make everything groove. Later on I moved more towards Trentemøller and his dark beautiful sound design. Hands down one of the best producers to make these crazy soundscapes that you just get lost in.

Viktor: I grew up listening to a lot of dance music, like straight up dance music. Somewhere inside I know there is still some of that left. Like Nichlas said earlier I like the fact that we are able to incorporate some of those really cheesy elements that I love, and just roll with, not taking a step away from it, but owning it. Later I was really into hip hop. Some of the elements from that are definitely apparent on "Howl".

What can we expect in the future from the band?

Viktor: We are actually just finishing up our first EP, but we haven’t set a date for the release yet. I think we are just going to release some singles this fall and probably drop it at the start of 2017.

Marie Louise: We are really excited to get it out, we’ve been working on it for a long time, and we are really proud of the result.

Nichlas: We are going to tour as much as we can as well. We really enjoy getting out playing the music live and get peoples reaction first hand.

Howl is out now on No3 Records