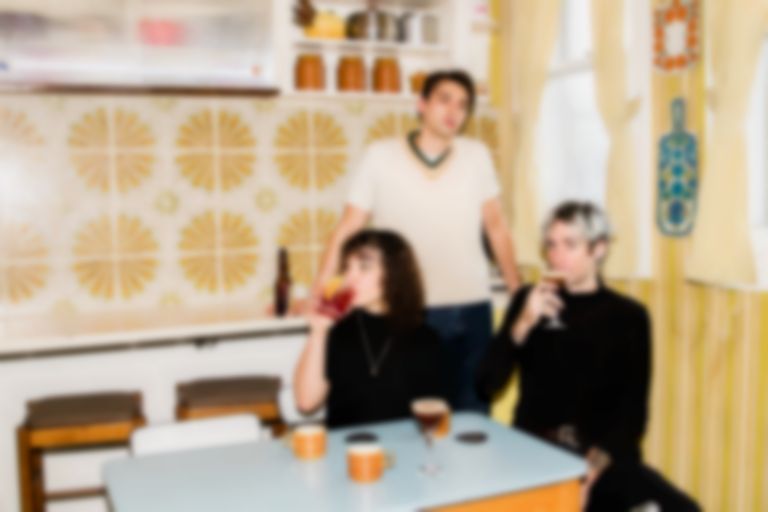 East London trio Human Interest take another of their lockdown demos and polish it into a slice of scuzzy garage-pop perfection on their new single, "Feel Good".

Fresh off the back of a couple of impressive tracks in 2021, the new release also arrives with news Human Interest's debut EP Desire Paths. While its themes delve into and highlight the pressures of modern dating and society’s urge to partner every singleton up, there’s a sense of optimistic cheer deep at the song’s core.

“To sum up my lyrical identity I’d say - an ADD surrealist space cadet with a very serious, very emotional side that creeps out under the fun,” vocalist and guitarist Cat Harrison tells Best Fit. There is indeed an evident earnestness that underpins everything here, but what else is clear is that the band have also penned a premature summer jam to warm you in the bleak winter.

Elaborating on how this track fits in with the general lyrical approach of the band, Harrison adds; “I think they’re all just little human-interest stories of fact and fiction. I have days where I fancy myself as a poet but other days it’s just pure escapism where I want to weave my own world to go to, through characters and fiction.”

Recruiting bassist Tyler Damara Kelly and drummer George Le Page to help develop upon the hundreds of rough drafts produced by Harrison over the past couple of years, the group collectively stumbled upon producer Julie McLarnon who deftly retouched the tracks that make up the EP. Despite "Feel Good" having been altered from its original form, the band still manage to place emphasis on the DIY ethos that characterised the band’s formation in the first place, keeping all the charm of a rough-around-the-edges demo track intact.

This was a decision that felt natural to Human Interest; “We decided to work with home demos in order to capture the authentic DIY way in which the songs have been made and how we’ve been working together as a band. I've always loved hearing my friends' demos, often preferring them to what has been released, not because they're better, but because they feel more vulnerable. It’s always made me rather sad that people don’t often get to hear these private moments.”

“"Feel Good" is essentially a break-up song trying to hide the fact that it is one. It’s really talking about the pressure that society puts on people to be in relationships. We’re afraid to be alone, yet some of the loneliest people you meet are in relationships. It’s a bit silly and cheesy, but so are people’s attitudes.”

Wearing their influences on their sleeve to an extent, it’s not hard to trace the driving inspirations behind the track, that has permeated the group’s sound in general. Seeping through are fragments of mutual favourites in The Jesus & Mary Chain and The Velvet Underground, though Harrison expresses a fondness for some more particular things such as the bass playing of Carol Kaye and the film Frank; a film that he wishes to “live out” a tamer version of. It’s this call back to the idea of a slight surrealist narrative pushing through in the lyrics that help the listener realise that despite their brief time together as a band, Human Interest really has it all figured out.

“I’d really, really love for people to listen to this and be intrigued by what’s going to come next. I’d like them to enjoy the songs and the melodies and the lyrics (obviously) but ultimately, I’d like people to find the music comforting in a way that confuses them”.

As the release of the debut EP draws nearer, "Feel Good" is an enticing way to keep that sense of intrigue well and truly alive. Having already earned support slots from the likes of Hinds and Self Esteem, they’re likely to continue enticing long into the future.

"Feel Good" is out now, with the debut EP Desire Paths set for release on 11 March via Kissability. Find Human Interest on Instagram and catch them live at The Windmill, Brixton on 16 January.