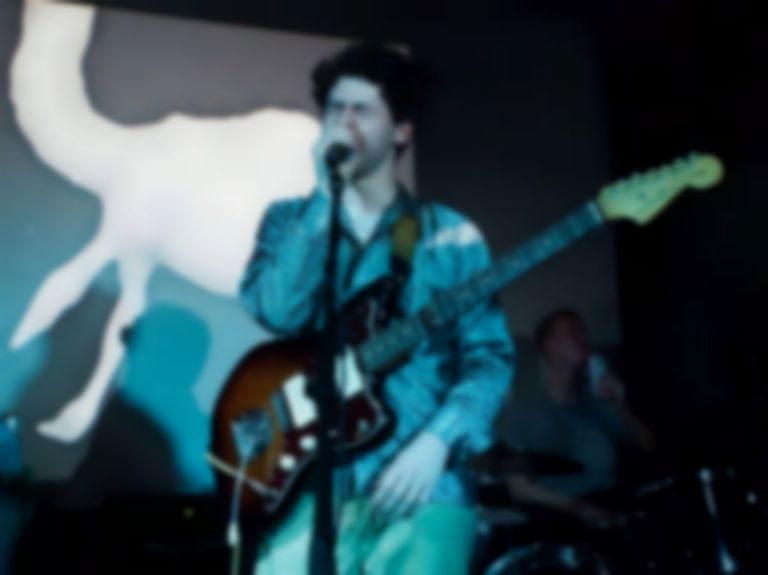 Something's in the water South of the river, and following the ruckus caused by Goat Girl, Shame, Matt Maltese and HMLTD, teasingly macabre new four-piece Horsey are next to break.

I've no idea how I first stumbled on Horsey but they're not a band you forget about in a hurry. Trust me. You won't find much information on the troupe led by Theo McCabe and Jacob Read (also known as Jerkcurb) - joined by their lifelong mate Jack Marshall and latecomer George Bass - online either.

What Horsey do offer up however is the three tracks - released all on the same fine day in August this year - found on their SoundCloud page. Each tells its own gleefully gruesome story. Each could be a page ripped from an Angela Carter compendium. Whether it's "Everyone's Tongue", which recounts, in gory terms, Jacob's evisceration in the mouth of a shark, or "Arms & Legs" where both singers yelp frantically about having their limbs skewered by the object of their affections over sneering guitars; Horsey don't spare anyone the details. And all this over some of the most intricately chopping and changing rhythms we've heard from SE-wherever since Adult Jazz came to prominence. Seriously, there's complex, fuzzed up, dirgey riffs galore to compliment this band's devilish storytelling.

If it sounds like there's an all-too-obvious Fat White's comparison to be had, try to sidestep that. Horsey share more DNA with say, Show Me The Body, whose gripping, anxious punk rock statements are made with similarly minimal fuss nor overwrought production attached.

I asked lead vocalists Theo and Jacob to fill in the blanks about the mysterious project they head up before their big hometown headline date at The Montague Arms next week.

First thing's first - where's the name Horsey come from? And what on earth is a "Crohn Elf"?

There isn't a creature on earth more powerful pound for pound than the stallion. Thrust itself is measured in units equal to the power of a horse. On the other hand, there is a softer side to a horsey - for instance women and children all over the land swoon for their deep and loyal companionship.

Chrohn Elf is the girl of your nightmares who you're also confusingly attracted to. A bit like the siren from Greek mythology, she entices you onto the rocks.

I like your camel. Why use that as the focal image rather than, you know, a horse?

Dan, just because it's got a lumpy back doesn't mean it's not a horsey.

You're headlining The Montangue Arms next week. What should people expect? And where's the shittest and the best venue you've played in London?

Expect multi horse-powered guttural explosion firework mayhem with a touch of sad and lonely. The Montague Arms is the best venue in London, with great interior decoration and they serve these delicious cheap hotdogs. No venue is a bad venue in our books. We gravitate towards park bandstands, bingo halls, Co-op parking lots.

It's all a plot devised by Southwark Council to raise house prices. At the back of any gig here you’ll find whispering estate agents disguised as human beings. Problem is you're never quite sure who they are; could be the sound man, could be your best friend, could even be in one of the bands. Never trust a man wearing a suit and playing the triangle.

Lyrically, Horsey is pretty fucking dark, especially the bit about being ripped apart by sharks on "Everyone's Tongue". Where do you draw inspiration from? And what are you most afraid of?

Nature, clouds, fractals, and that moment in life when you remember something so cringe that you punch the bus window and break your little finger. As for your second question, Dan, we are currently most afraid of fear itself.