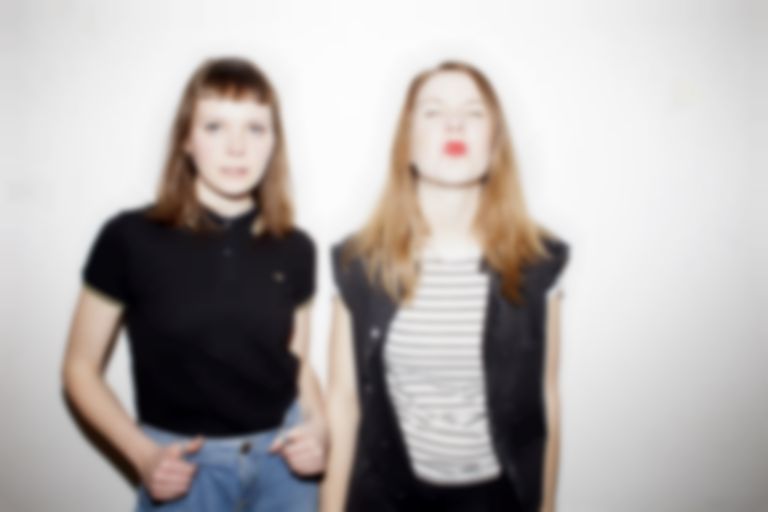 Berlin-based duo GURR stream their debut LP In My Head and chat to Best Fit about their city, working in the legendary Funkhaus studios, and 2017.

Can you give us GURR's origin story?

Laura Lee: Andreya and I met in university. I think initially we were a little skeptical of each other, but then we really bonded over literature, music and movies and started hanging out. The band was just a logical conclusion to our cheesy friendship and our love for JEFF The Brotherhood, Black Rebel Motorcycle Club, and the Black Lips.

Andreya Casablanca: Also, shortly after we became friends we booked two cheap flights to England and then just hitchhiked and couchsurfed throughout the UK. We told everyone there we had a band. So once we were back in Berlin, we kind of had to follow through. We rented a practice room in Neukölln and everything started from there.

Could you tell us a bit about In My Head - how did it come together?

Andreya: All of the songs on In My Head carry a story. There are songs about hackers falling in love with their computers, drunk guys in bars who live in a fantasy rock’n’roll world, or about my own ignorance towards current issues (that usually comes from self-indulgence). The songs just show pictures of an experience that we had or dreamt or talked about.

Laura: I think a lot of the songs also directly draw from movies we watched. Like the last song "Song For Mildred" is about the '70s movie Three Women. It’s a very freaky movie about a friendship that turns into a psycho-horror scenario - one girl is copying the other and in the end you don’t know who is who anymore. I think overall, we write a lot about characters in movies or even characters we meet in Berlin. Like "#1985" is about a guy we always see in our favorite bar in Berlin.

L: We recently played with Jimmy Eat World and this German 'celebrity' (Elton) was there and said we reminded him of this '90s band called Belly. I didn’t even know the band up until then but I think in retrospective, our album has a lot of this '90s sound. I can also hear some influences by The Breeders or more contemporary bands like The Courtneys or Chastity Belt in our record now.

L: It was kind of sad. The whole building was bought up by an investor recently and one studio after the other was forced to move out while we were recording. On one of our last days of mixing, our sound engineer also got an eviction letter. So we were probably one of the last DIY bands to ever record there. I think they are building really fancy studios now only for electronic and pop artists…

A: Apart from that we had a great recording experience: We recorded and mixed the whole record analoge, with no digital editing or effects. So we had to pick our battles: Usually we went for the takes that 'felt good', even though they had some mistakes in them, and then resisted from fixing them afterwards. I think that makes the whole record very relatable.

What's the best thing about Berlin? What's the worst thing?

A: Just the other day I thought of how deeply involved Berlin is in the feeling of our band. It’s funny because in Germany, a lot of people always say that we sound "very American". But to me, our sound is super influenced by Berlin. There is this weird nostalgia in our music that reminds me of the city: thoughts you have while taking long train rides or walks or watching other people - which all made it into our lyrics.

L: I would say the worst thing about Berlin is that Andreya and I live like one hour apart from each other…

What Berlin bands should we be listening to?

L: Right now, two of my favorite Berlin bands are Häxxan and PTD. Häxxan are a garage-stoner-rock band with one of the best drummers in Berlin. PTD is also a friend of ours, called Lewis, who writes lovely goose-bumpy post-punk anthems with creepy Bauhaus vocals.

A: You should check out his latest music video to his song "Pain": he just walks around Paris, dressed as a vampire with a selfie-stick smoking e-cigarettes. It’s great!

What's been the best thing about making your first album?

L: We were kind of in a trance making the record. We were working, studying, touring and all the free time we had, we would go to the studio. I’m just so proud we made it through and survived this crazy process, as friends and as a band.

L: We recently played a show at Reeperbahnfestival. So many important people were there, like bookers from all over the world, SXSW people, you name it. Towards the end of our set, we completely blanked on one of our songs. That never happened to us before. We started it twice but we were always in different keys and couldn’t remember who was right and who was wrong. Then we just started singing Gwen Stefani's "Hollaback Girl" and played our song "Rollerskate" and the audience went absolutely crazy.

A: Afterwards, that was the moment that stuck with everybody and people were asking about it days later even.

L: I hope that we record another album and get to spend more time making music and writing new songs this year. We are both in this transitional time right now, finishing our master degrees and not knowing what comes afterwards and how big a part music can play in our lives. Ideally, we can just build our own little recording studio somewhere in Brandenburg and just hang out there, write and record.

A: We were just accepted for SXSW in Austin, Texas so we have a lot to prepare for that: visas, funding, apartments, flights… do you have friends in Austin that wanna host us? We can make them pancakes! Also we are playing England for the first time: Brighton on 30 November at The Hope and London & London on 1 December at The Old Blue Last! So come hang with us if you are there and we will have a beer with you.

In My Head is released 28 October via Duchess Box. Pre-order now.