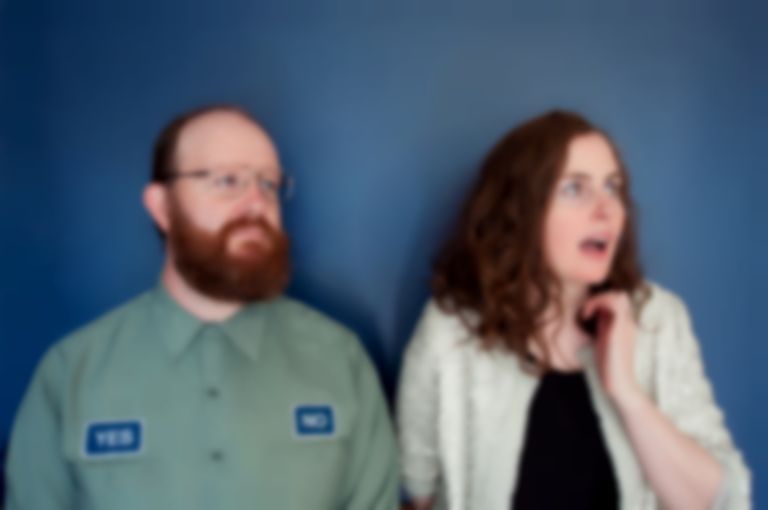 Frontperson is the new project from Mark Andrew Hamilton of Woodpigeon and Kathryn Calder of The New Pornographers. The project started after a chance encounter in a studio hallway where they decided to form a band. Returning to their respective homes, the pair then continued what seems to have been a musical pen-pal exchange, sending ideas back and forth between Vancouver Island and Montreal.

Having picked their favourites, they went to Calgary’s National Music Centre to record. Hamilton describes the process as, “like camp at a theme park for musicians. We used Mellotrons, Orchestrons, Optigans, and the world’s first commercially produced synthesizer.”

Where the band's debut single "Tick-Tock (Frontrunner)" saw Hamilton take the lead, so to speak, the follow up "Young Love" sees the baton passed to Calder, whose soothing, assured vocals catalogue the fledgling, uncertain early days of a relationship over twin fluttering guitars, as they describe, “the feeling of meeting someone and those first days when everything is kind of unsettled but yet you also know it’s the right thing.”

The moment that Hamilton and Calder’s twin vocals combine is a delicate highlight, the considered harmonies playing out over subtle strings courtesy of Clea Foofat (Raleigh/Dojo Workhorse) and Foon Yap.

Throughout the record the interplay of the two distinctive vocals sounds as if the pair have been singing together for years rather than a few months.

The video was produced by Lorenz Tröbinger, who has previously produced the ‘Devastating’ video for Woodpigeon. Hamilton explains: “I met Lorenz in Vienna when he was all of 19 years old, and since then I've watched him become an amazing filmmaker”. The video is an intensely personal reaction to the track, as Tröbinger reveals "Before I even listened to 'Young Love' I had this thought in my head about how songs are often so very personal, sometimes specific to the musician‘s life and past and how at the same time music videos usually aren’t. At least not in the same way as songs are as they don’t usually reflect on the filmmaker’s life as a song might reflect on the musician’s. So it was clear to me that the film I wanted to make in response to Mark’s and Kathryn’s music would come from such a personal place…The film is about me and my boyfriend James in London and our relationship that we decided to end when I left the city. About the sadness that came with knowing that the other person would soon be far away (we shot the video a week before I left) but at the same time about the beauty of making the most of the time we had together and separating on the best of terms - Knowing that we would always have a very special friend in the other one. I feel that this kind of separation, when life is taking you in different directions, is somehow more typical for the first couple of relationships in a person’s life, typical of young love. If we had been ten years older, perhaps we would have decided differently, who knows, but for now, it was the right decision. The film is a document of and a tribute to the year that we got to spend together and to the love between us - love that hasn’t ended but that is going to take on a different shape now."