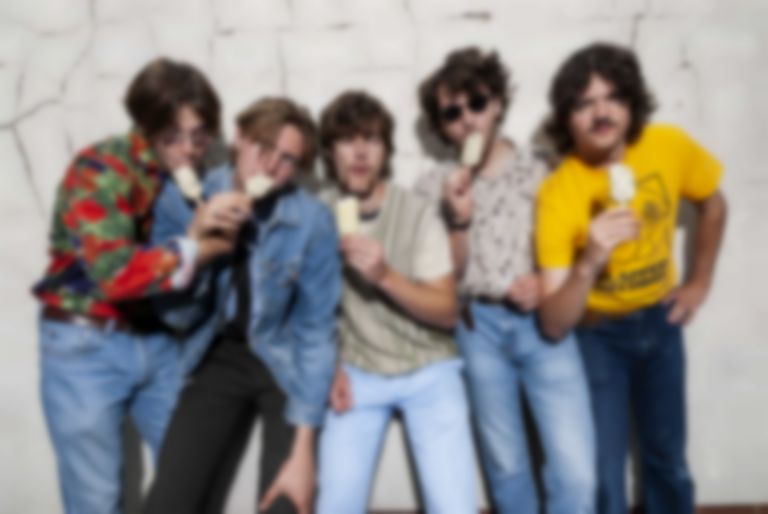 Taken from the forthcoming album What’s Inside Is More Than Just Ham, “Outer Rim” proves yet again that Coventry fugitives FEET are anything but conformist.

As part of a generation of bands with something unorthodox to say, the results are quite simply thrilling, and in FEET’s case especially, as bonkers as they are brilliant. FEET, along with their peers Egyptian Blue and The Murder Capital, join a new breed of indie-punk bands spearheaded by the success of IDLES and Parquet Courts, and passionately championed by the likes of ex-Maccabee Felix White’s Yala! Records.

With an urgent and arresting delivery akin to a hybrid of 2005 Paul Smith belting out “Apply Some Pressure” and Damon Albarn in peak “Parklife” mode, “Outer Rim” is a rampageous and cocksure ode to someone taking up too much headspace. As ever, the band’s ability to switch and change and fly off on unexpected tangents is ever-present, so it’s open to interpretation as the quite magnificent story below, as told by the band, epitomises:

“What follows is a story about 5 men, embarked upon a journey of unparalleled twists and turns, this is the story of 'Outer Rim' (or as it was then known, 'Prang Meets Pong Meets Peng Meets Ping').

Withering in our own filth (picture the kid in Snoopy who’s always covered in shit) in a rehearsal room, convinced that we were on the brink of yet another debilitating creative block, we held our collective breath and returned to the punk route, a most dust-ridden trail at this point. The following day, Moscow’s Bolb Festival was rewarded with the first taste of Outer Rim (внешний край in Russian, for all those unenlightened comrades), with Moscow’s youth seemingly taking a liking to this 3 minute instant classic.

After leaving our self-deprecating mark on a couple unassuming devochkas, we headed home, reminiscing about the overnight success of our new song. It was on the plane back though that Neil, our tour manager, mentioned a distinct similarity between the bass drop and a well known Metallica song. Then, before any of us could summon another breath, a man in a dark brown overcoat handed Oli a phone, his thick Scandinavian accent uttering the words 'it’s for you'. The rest of the band - pissed and disorientated - struggled to work out what was being said down the line. After handing back the phone, Oli spent some time in Frankfurt dealing with some 'legal proceedings', turns out the phone call was from Lars Ulrich, who’d sent an agent out to Moscow on a possible code red, lawyers at the go, the fucking jugular. Anyway we arrived home in Cov and everything just seemed kinda fine, that was a weird year though.”

“Outer Rim” is out now and What’s Inside Is More Than Just Ham is out 4 October through the band’s very own Clapped Records. Find their tour dates on Feet's Facebook.