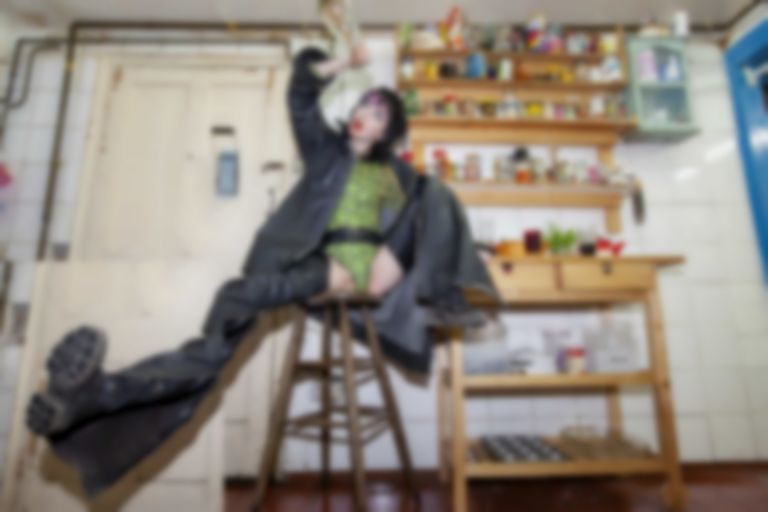 Irish-born, East London-based Bambie Thug’s debut single “Birthday” arrives much like many people do on their eighteenth: absolutely wrecked.

Fueled by a party-bag of uppers, downers, and everything in-between, "Birthday" sprints through a hedonistic haze that hoovers up trap, pop and electronic sounds to dizzying effect.

Above the sordid and see-sawing sound that borders dehydration, Bambie Thug’s stoic-but-smashed stream of consciousness arrives like a welcome glass of tap water, with their coaxing voice documenting the events around them like a debaucherous diary. They float through brawls, consume copious drugs, and wait impatiently for their tardy dealer. All the while nonchalantly insisting that, “I only do drugs on my birthday”.

The sparse metallic backing beat, that evokes Vroom Vroom era SOPHIE, feels close to pranging out as the dirty combination takes over. The beat stop-starts, rewinds and buffers itself into near oblivion.

“Birthday” vibes like a contemporary incarnation of Iggy Pop’s “Nightclubbing”, but where pop stumbled through 1970s Berlin taking stock of the brand new dance craze called “the nuclear bomb”, Bambie Thug stomps through east and central London, doing all they can not only to survive to the next club, but more importantly, to “avoid the West End”.

It’s a surreal, confident first statement that Bambie Thug dedicates to “all the goblins out there” proclaiming that “music is the only drug we will ever need”.

“Birthday” is released the day before Bambie Thug’s actual birthday, so at least you know how they'll be celebrating its release.

"Birthday" is out now via Unity Records. Find Bambie Thug on Instagram.