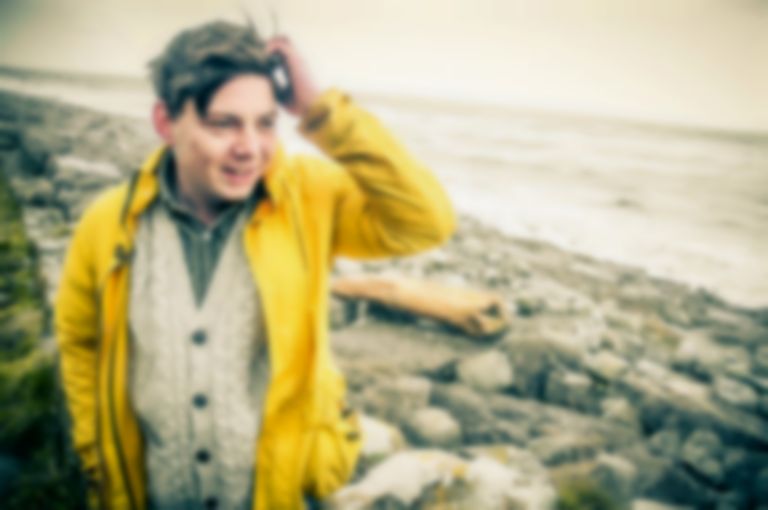 “I was writing a lot of songs about the sea and thought it was a good idea to make a concept album and call it ‘Ships’,” says Cardiff-based indie crooner Sweet Baboo about the inspiration behind his brilliant new record entitled, indeed, Ships. “Somewhere along the way the concept got a bit confused so now I like to call it a brass based pop album inspired by girls, the north Wales Coast and mostly the sea”.

With the loose-lipped lyrical dexterity not seen since The Magnetic Fields‘ Stephin Merritt, psych-pop sensibilities that seem commonplace in some parts of Wales and bittersweet melodies reminiscent of Belle and Sebastian, North Walian-born Stephen Black weaves together not only his most concise and comprehensive record to date but perhaps the best indie-pop album of the year thus far.

You can take an exclusive listen to the LP below before it comes out on Moshi Moshi next Monday (22 April), with a track-by-track rundown from Black himself beneath it.

This was the last song from my last album ‘I’m a Dancer/ Songs About Sleepin’. I like songs appearing on more than one album. It’s my reference to Weezer.

That’s the version that opens ‘Ships’. Accidentally, It’s quite an appropriate opener as I consciously wanted to make a more upbeat album than the previous one.

The Morse Code for Love is Beep Beep, Beep Beep, The Binary Code Is One One

This song was written while I was stranded in New York when the ash cloud struck, about 3 years ago. I went to see Apples in Stereo at the Bowery ballroom and misheard one of their lyrics and wrote it down.

Musically I wanted it to sound like Paul McCartney’s song ‘Let them in’. Rob Jones (producer) and I had already recorded it a year or so before when we started a short lived side project. We re-recorded it for the album for continuity purposes.

The other version is on the Internet somewhere I think. At the time I was particularly proud of the line ‘ If I had a drum, and you have a slightly more high pitched drum, and we pound the shit out of these drums and fill our hearts with love.’ Not sure why.

A ballad for the love of librarians and the bbc4 programme and activity, wild swimming. It probably embodies best what the rest of the album is all about.

“The sea, girls and brass.” There’s a reference to one of my favourite Bill Callaghan songs on it. There’s no reason I should be singing that high. At the time I think I thought I was Curtis Mayfield.

The last song I wrote for the album. It’s a fun and dare I say it, a sexy song about love. Well it’s not a heartbreak song, that’s what
I mean.

The title is a vague reference to the band ‘The Make Up’ who had a song called C’Mon Let’s Spawn. I’ve used the same reference a couple of times in the past too. (C’Mon Beef and C’Mon Let’s Permoose!)

Another song from my and Rob Jones’s unsuccessful side project. It’s essentially a love song by someone who’s listened to far too much Neutral Milk Hotel. My mum said I’ve stolen the melody from Bob Dylan but can’t remember which tune so that’s ok.

Musically I’m trying to solo like Yo La Tengo.

This is the only song recorded at a different time to the rest of the album, the only song to have a guitar solo some backwards cymbal and double tracked guitar. It’s alsothe only song not to include any brass.

Lyrically, the verse is stolen from a song I wrote earlier in the year which mentioned the 8 Bit Monsters of Menai Bridge. The chorus is a reference/rip off of a) the Beatles ‘With a Little Help From My Friends’ and the Beach Boys song ‘Cease to Exist’.

‘Cease to Exist’ was actually written by Charles Manson, which has no relevance to why I used some of the lyrics.

Hopefully neither party will notice and sue.

You Are A Wave

My house mate, on the other hand, says this is her least favourite song as I followed her around the house for two months repeating the line

The Sea Life Is The Life For Me (Mermaid Cutie)

This is a song about finding a mermaid on the coast of Anglesey and getting married. Musically I wanted it to sound like stereo lab and spy music.

Build You A Butterfly

Our nod to the Monkees, especially the song ‘she’. It also sounds a bit like Less than Jake.

I wrote this song about my friend Cate and some of stuff we’ve got up to over the years. From meeting in Aberystwyth, swapping shoes, playing on the dance mat, listening to Michael Jackson, seeing Paul Daniels and Debbie MgGee to getting blind drunk, roller skating and
eating. All very mundane stuff.

It’s an upbeat song about the joys of friendship and I think it’s a good way to close the album.