John Constantine, Alan Moore and the Secret World of Comics

Near the end of Hellblazer #10 - The Devil You Know, John Constantine gives the middle finger to Satan, and says to him: "Up yours".

Seconds before, Constantine wins his life back in style - a swindle that leaves the rulers of the afterlife (Satan, Beelzebub, Azazel, God) arguing over ownership of his soul. Before that, he'd been diagnosed with inoperable lung cancer. He fixes it so that his resurrection is the only way of preventing an apocalyptic Holy War. He literally blackmails himself back into the real world. John Constantine is an expert con-man.

It was his choice of words that grabbed me. Up yours. A British insult from a British superhero. I'd grown up loving Batman and The Green Lantern, Lobo, The Silver Surfer and The X-Men. But as either aliens or inhabitants of fictional cities, they were undeniably American.

John Constantine was the first real home grown character I believed in. He was the creation of Alan Moore, a writer from Wolverhampton who'd started out writing for Vertigo (2000 AD) which was later bought out by DC. Moore moved to DC eventually, and one of his first jobs was to bring back an obscure sixties character called Swamp Thing. The resulting run of comics is now legendary.

Constantine was tall and assured. He drank and smoked and was always dressed in a Columbo style trenchcoat. He was a practitioner of the dark arts, or an 'occult detective', and was forever haunted by a seance-gone-wrong incident in Newcastle, in which a young girl's soul had been consigned to hell. As with most of his friends who'd go on to die (as a consequence of being roped into whatever situation John was involved in), he'd deal with the guilt through drink and sarcasm and black humour.

His dialogue was written in the same language as people I'd known and grown up with. He was tough, like a Raymond Chandler or Daschiell Hammet character. Hard-boiled. But again, and importantly, Constantine was British. From Liverpool, in fact. I'm no patriot, but you know what I'm getting at. I was a fan from the get-go.

After his seeing him appear in Swamp Thing, I burned through the available Hellblazer collections and continued reading them until around 2010, when I felt the storylines had weakened, and a lot of the original creative teams had left.

I hunted down the available comics and graphic novels. I had a few, but a lot were borrowed from James, our singer, who has the complete collection. Those comics have been passed around almost every one of my mates within a ten-mile radius of our rehearsal room. 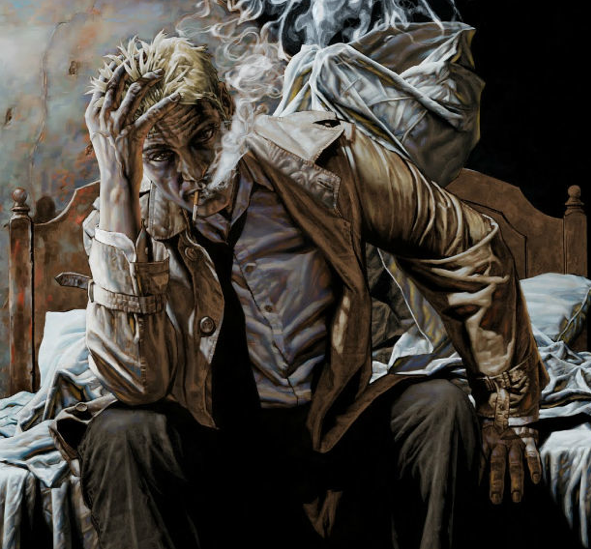 Having read the DC and Marvel universes as a kid, I'd almost forgotten about comics in my early twenties. I was immersed completely in music and couldn't find space for much else. Things changed around 2007, after catching a late night repeat of Jonathan Ross' (surprisingly great) In Search of Steve Ditko documentary, which re-ignited my (and most of the band's) love for graphic novels - some of which I hadn't heard of before, and had started to get recognition in the mainstream comic world- Alan Moore's eighties masterworks, especially. They're considered gospel nowadays, but it took time for them to break into the mainstream. You've probably seen the Hollywood adaptations - V for Vendetta. The League of Extraordinary Gentlemen. Watchmen. From Hell. Constantine.

All of those movies were disowned by Moore, who insisted his name be removed from the credits. He also refused to accept any royalty payments from the studios. In his mind, complete disassociation meant sacrificing money, too. He makes a convincing case as to why.

That Steve Ditko documentary opened up a world of alternative artists to me. People like Robert Crumb and Brian Bolland, writers like Garth Ennis, Jamie Delano and Grant Morris. All of who ended up influencing the output of the music I’ve been involved in.

As a band, we met Alan Moore. The coincidence was eerie. We were mixing the title track from Butterfly House in a Liverpool studio called The Motor Museum. The album had been produced by John Leckie, and Leckie had performed a spoken word piece in the middle of the song we were booked in to mix. The piece itself had been lifted straight from the pages of Hellblazer 14 - Fear Machine:

The seaside was magic. Watching the tide dribble in mysteries of foam. Exploring weird alien worlds of tide pools and comics. Then, at night, the funfair.

While Leckie was setting up the tape reel, a couple of us were stood outside having a smoke. Suddenly, I saw a figure walk into the bar opposite the studio. I recognised him instantly. The familiar mane of hair was there, and the beard. The medieval ringlets that covered the fingers of one of his hands...

"Did you bring your copy of Watchmen?"

In the bar, Alan Moore shook my hand and signed the inside cover (not my copy) of Watchmen. I told him Constantyne was my favourite comic character, and he congratulated me on the pronunciation. "Not like the film with that wally Keanu Reeves," he said, and I laughed. It's the details that count.

Hellblazer ended its term in 2013, and was replaced by an inferior run simply called Constantine, to coincide with the poor NBC television series of the same name. It was cancelled after one season.

Constantine continues, albeit in printed form. I’m not sure how long for. For me, he’s immortalized in the run that started with Original Sins and ended with Death and Cigarettes, almost twenty-one years later. In my imagination he can't die, because that would suggest him losing in some way, and the allure of John Constantine is that he has nothing to lose. That's the way I see it, anyway. And they're the characters I love the most.

The Coral's new album, Distance Inbetween, is out tomorrow on Ignition Records.