When I zoom with Mike Hadreas (the artist known as Perfume Genius, who’s as much a connoisseur of cologne as The Paris Review is an assessor of Paris) he’s midway through a dance rehearsal, sweat beading on his forrid, skin slightly pinked.

It’s been four years since he released an album called No Shape, a decadent, Prince-inspired fantasy about a liquid existence without boundaries, borders, bodies, shapes. “Don't hold back, I want to break free / God is singing through your body,” he sang on "Slip Away", as he imagined a way to transcend the physical and intelligible, in hopes he might catch a glimpse of the holy. It was entirely abstract in its aspirations.

However, a couple of years later, he met with Kate Wallich, a dance choreographer, with whom he worked on a tour of live dance performances entitled "The Sun Still Burns Here", which amounted to an hour of “deterioration, catharsis and transcendence,” according to its programme notes. Those three words—deterioration, catharsis, transcendence—seem to be a throughline across five Perfume Genius albums. Through self-immolation, he strives to find a sense of healing. He’s the Marina Abramović of baroque pop.

The body—as a portal, as a concept, as an instrument of desire—has been a principal point of concern across his work, too. But not until 2020’s Set My Heart On Fire Immediately, which closely followed his work in "The Sun Still Burns Here" did he really embrace the limitations of the body through his music. Turning his aspirations outward, he rendered his abstract desires into something material and bound. “Give me your weight, I’m solid / Hold me up, I’m falling down,” he sang in the aptly titled "Your Body Changes Everything."

While plans to tour the album were thwarted by the pandemic, a remix album with takes on Set My Heart On Fire Immediately’s thirteen tracks by the likes of Jenny Hval, Danny Harle, A.G. Cook is filling its gap. Ranging from happy hardcore and acid-rave throwbacks to spare electronica, the new album, entitled IMMEDIATELY Remixes, is another chance to dance. 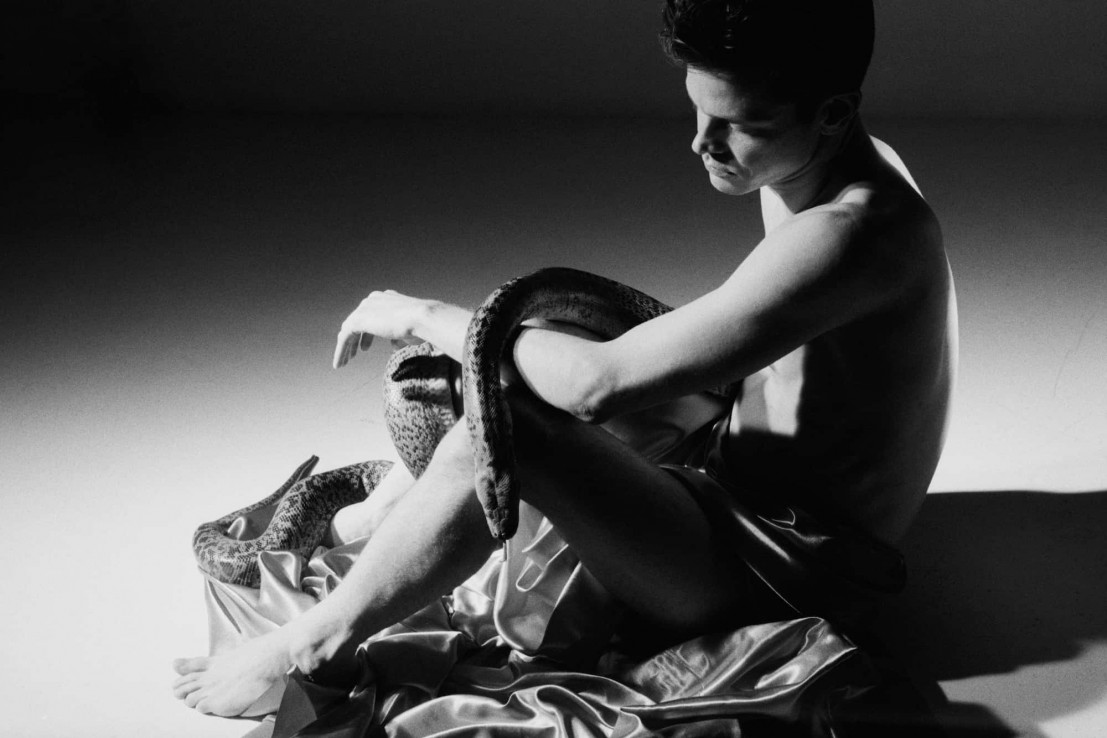 BEST FIT: Because so much of Set My Heart on Fire Immediately was about you coming into your body or being more present, I’m wondering how lockdown has altered your relationship to your body?

MIKE HADREAS: Before lockdown even I was in kind of a mania with that idea. Once I found that portal to dancing and moving and truly being connected to my body, it heightened my connection to myself, it heightened my connection to outer spacey feelings too which I thought were only accessible through thinking or spiralling out. I didn’t realise I could get to some magical outer space place and be in this world too. So I got kind of manic, like all I wanted to do was pick people up and be picked up and roll around and then that was all taken away and a lot of the songs were sort of sourced from that thing. So it was kind of excruciating at first honestly. I was getting a little intense.

I feel like I got a little bit of it last year, an extended period of a moment, where I felt in the moment. And before that not very many, and since then not a whole lot honestly. That’s why I’m doing this rehearsal for a dance thing. I’m going to eventually be dancing in front of a green screen so that my friend I’m collaborating with can make something with it, but I haven’t been dancing for so long I feel really disconnected from it. I was at a place before where I don’t know, I had an awareness of my body and where it was, and now I can do like an arm maybe. I can do an arm and a foot. Before I felt more 360 about it but it takes a lot of practice and a lot of attention and I don’t do either of those things very well.

And I’m not self motivated at all, that’s why I haven’t been doing it until I got this specific project to work on, because if I don’t have a deadline or something specific I just play video games and spiral.

Do you have much of a routine at home?

No I do not. For a while I did. I’m ready for breakfast, that’s about it, that’s it really as far as routines go. I’ve always been really bad at that. But if something’s in front of me like you have to do this, I will relentlessly apply myself, but if it’s up to me I’m not.

Do you tell yourself that you have to do certain things?

No, even in the beginning of lockdown people were reaching out to me for advice on how to do nothing. I have a reputation for being very content at just doing nothing, which is true. I do need to balance it out, but if there’s nothing I’m supposed to be doing, doing nothing doesn’t feel as fun to me. I don’t know, I don’t really have any routines beyond just certain ideas that I hold in my head and have to remind myself of when they spiral out but it’s more abstract.

No Shape was about the fantasy of leaving your body, transcending it, while Set My Heart On Fire was about inhabiting the body and accepting it, is that where you’re still at?

I’m sure I’ll be somewhere else for the next record. But there are things that I love about both of those ways of moving through. I do like that when I made both the records I felt anchored in the way I was thinking about stuff and thinking about myself. I don’t know if it’s necessarily true but a lot of times I really have no idea what I’m doing but then writing makes me feel like I do and I have this document that at some point, even if I was making it up, I have some clear ideas. Or I was able to sort out all this stuff happening into something that made sense or if it didn’t there’s a whole world made for it to not make sense, or there’s a room made somewhere. I don’t really have that in my daily life, like, when I’m walking around I don’t feel settled, but I think that’s why I make stuff up all the time and why I feel so different from year to year and about myself about my surroundings, and I’m not really fighting against that as much as I used to. I just kind of wait things out and if that kind of waywardness feels overwhelming it doesn’t feel like that as much just because I’m old and I’ve been feeling that way for a long time, so I just wait it out and eventually I’ll connect to something, even if it’s just an album I get out of at best.

I think the reason why the physical part felt revolutionary to me is because I was getting an album out of it, and something to make and share, but also I felt good, I personally felt good and I was performing and singing and I was personally enjoying it and I never really enjoyed it before.

This is the first time you enjoyed it?

Well a higher percentage. In the beginning I was proud of the shows but you can't get rid of how anxious I was, I was still in my body. And the last album when I was touring and performing and singing I was thrashing around and kind of not being very nice to myself, so I’d be proud of what kind of tour that made but I still kept that feeling that I was thrashing, and this feels a lot more intentional and kind, not that everything I’m singing or performing is sweet or anything but the way I’m communicating feels healthier or something.

Just because you are being more intentional and more physical?

I think so, I mean I haven’t toured it yet, that was the plan anyway and that’s how I felt when I was writing and listening to it anyway. All that music kind of brings back a good feeling in my body, I don’t know why it could’ve just been where I was when I made it cause I have older songs that were kind of sweet and heartwarming but they don’t conjure up that same feeling.

Did you have any kind of background in dance before you did this?

No, I wish I would have, I think I would really have loved it. I’d never taken a dance class or anything before. 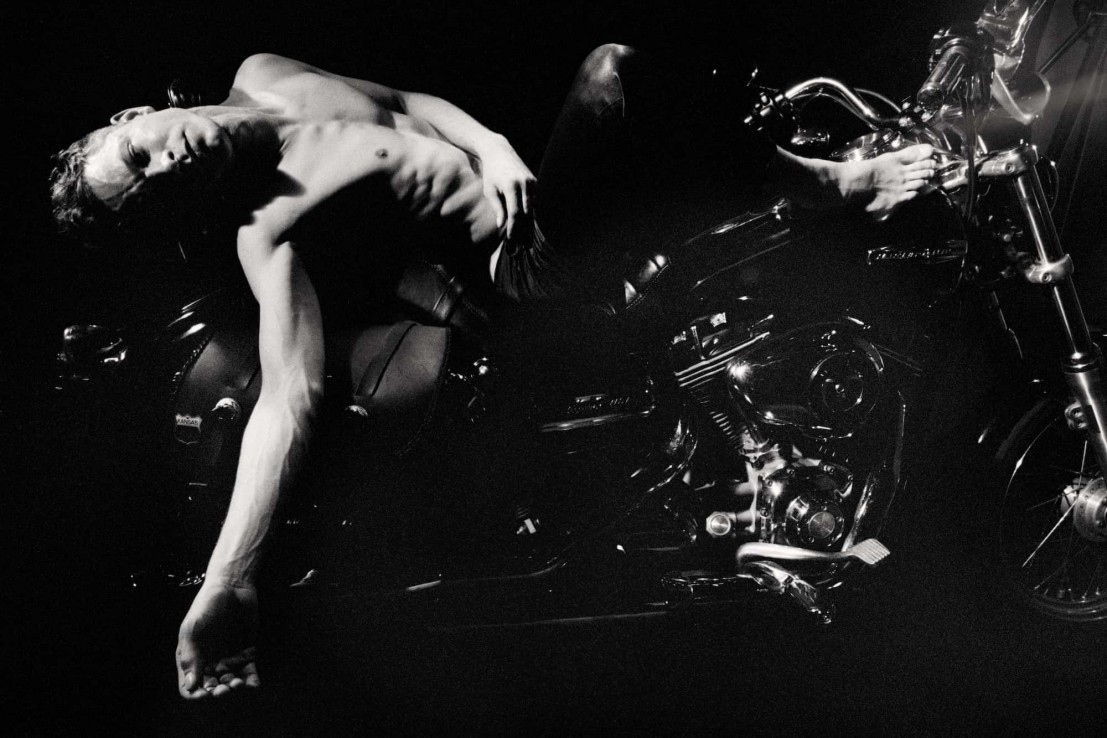 Does it change how you relate to people when you’re made to be really aware of people’s space and how you interact with them in a choreographed way?

It does, especially if I’m really deep in the practice of it. When we were doing a bunch of rehearsals and I would go to a restaurant and the host would lean forward and I would instinctively lean back to complement her, or I just had these urges to pick people up, noticing the space between people, things like that. But all that tends to get sapped out. Where I’m at now is weird, because I was at my mom’s for a few months and before that we were just home, I haven’t seen anybody or been doing anything. I could’ve maintained some sort of practice, movement or whatever but I don’t feel that bad about it cause it was just a horrible year all around.

Totally—why would you want to practice being present when there’s no good reason to be present right now? Still, it almost seems tragic, all the positive conclusions you came to on Set My Heart On Fire Immediately that you aren’t able to put into practice...

I mean in a way I did feel like that in the beginning but it’s still there it’s all available. I remember my friend said one time that he hurt his hip and he took painkillers for it and even if they don’t heal anything it reminds your body that it can be without pain there and that’s good, it reminds your body that no pain is available as a state. So I just feel like it’s a vein that doesn’t deplete even if I’m not there or don't have all those things available they’re not gone, I just can’t use them right now. But I know that they’re there and that’s a new thing for me so it feels like part of a toolkit or something.

Would you say that Set My Heart on Fire Immediately was really an experiment in choreography and making everything intentional?