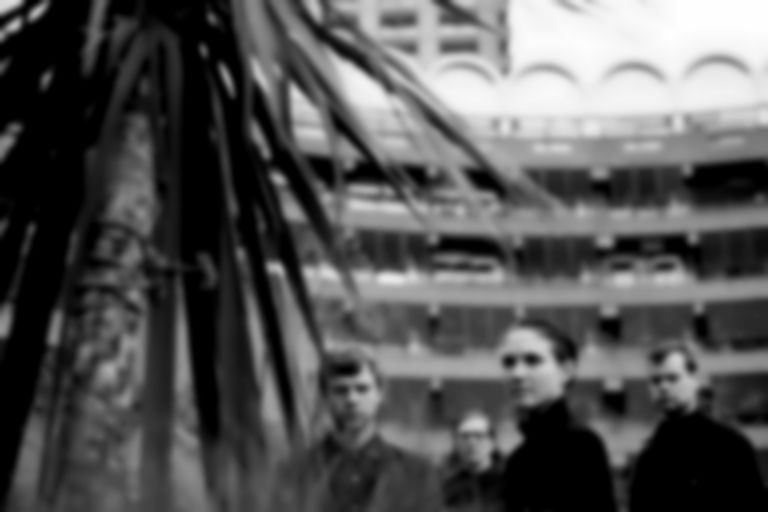 London four piece Woman’s Hour are the architects of the most intelligent new music we’ve heard this year.

Into the dark, brooding pop sound that we do so well here in the UK, they cut a gray-scale rainbow of rich and delicate undulations, playing off layers of synth and percussion against chiming guitars and heart-in-mouth basslines. The band’s unique aesthetic is built around Fiona Jane, who weaves a textural northwestern vocal delivery and physicality into softly slanted lyrical dances of emotional extremes around her talented bandmates William Burgess (guitar), Nicolas Graves (bass) and Josh Hunnisett (keyboards). The result is also one that finds cohesion in conflict and unity, supported (and transformed) by a stunning approach to performance.

The band have come a long way since their formation in Kendal back in 2010 and this year has seen an dramatic shift in sound, dynamic and live execution that’s based in a growing self-awareness as much as an iterative, organic visioning of their direction. “I think we’ve all learned to be more patient with each other,” explains Jane to Best Fit. “It’s an intense relationship spending thirteen hours a day in the same room, but it’s also very focused.”

They signed to respected indie Secretly Canadian last week, joining a roster that includes The War on Drugs and Jens Lekman.”It felt very important for us to continue developing without compromising too much,” asserts Jane. “They’re a label we have tremendous respect for so it’s an honour to continue into this next phase with them.”

A string of assured, affecting tracks (“Darkest Place“, “Thunder“, “To The End“) and one standout cover (a tempered take on “Dancing in the Dark“) offer up some idea of where the band’s 2014 debut long player may go and Jane believes the band have a “pretty clear idea” of how the record – being recorded right now – will sound. “We’ve been working on these songs for a while so we’ve taken time to write songs that we feel can connect with each other.

“But we’re always trying new things out, it’s important for us to experiment with different sounds and textures.”

Alongside their label signing, the band count November’s support slot to Volcano Choir at London’s Barbican as a highlight of the year (“a real achievement”, says Jane) but they all remain resolutely tempered about the wide success we’re sure they’ll find: “The songs are bigger than any of our egos, so we’ve learned to allow everyone space to vocalise their thoughts and not be too precious about things.”