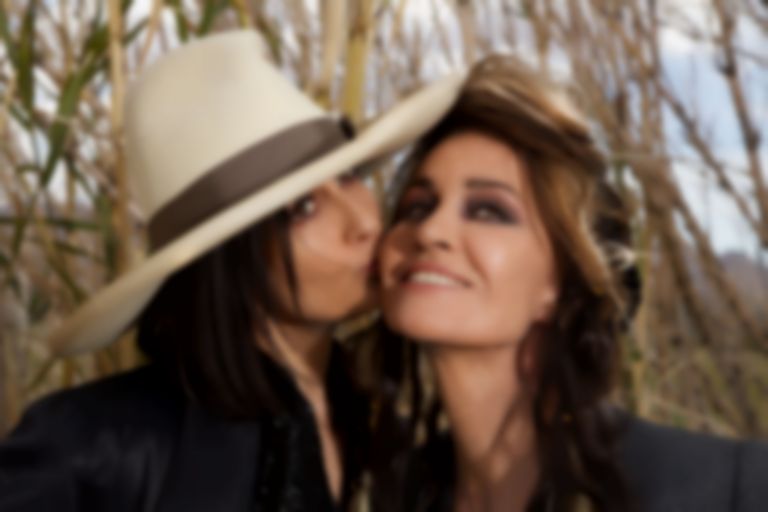 After two decades apart, the Goth Pop heroines are returning for a tour and new EP. Siobhan Fahey and Marcella Detroit talk to Claire Biddles about the songs that have inspired both incarnations of the band.

“For certain songs we start off with a favourite song, and then we try to emulate it,” says Siobhan Fahey, explaining her songwriting process with bandmate Marcella Detroit. “I love bands that do that - ‘talent borrows, genius steals’ - and all that. I love playing spot the influence.”

Fahey and Detroit are in London rehearsing for their upcoming UK tour, a somewhat miraculous occurrence considering their history as a band. After releasing two albums together, 1989’s Sacred Heart and 1992’s hugely successful Hormonally Yours, the duo split acrimoniously and until last year had not seen each other for 25 years. They initially reunited to put together a greatest hits compilation but soon ended up back in the studio, a fruitful session in Joshua Tree that resulted in their energetic and melodic upcoming EP Ride Again.

Dressed impeccably and signing copies of the EP in their manager’s office in Hampstead, there’s a palpable warmth between the two women, who seem to be relishing their renewed partnership. “I’ve written with so many people over the years and so has Marcy,” says Fahey. “I now know how rare it is to have this kind of chemistry.”

It’s clear, both when discussing the writing and recording of the new EP, as well as their nine song choices, that the duo are as much enthusiastic music fans as they are musicians. “I’m primarily a fan and Marcy is a master musician,” clarifies Fahey. “We discuss what we want to do and then go for it,” says Detroit. “We listen to some great records and talk about what our influences for each song are; what we want to say and what we want to do. We pay attention to that, get the inspiration from that and then just go.”

Fahey describes the process as organic and highly collaborative and emphasises the importance of listening to songs to pick out starting points: “We play each other records that we love the sound of, pointing out a drum sound or a guitar sound. It’s just the best fun.”

This collage-like approach is evident in the duo’s song choices – an eclectic mix of genres and moods, from melodramatic ballads to swaggering soul.

Siobhan: “Prince was a major influence on us back in the day. The man could do anything. from writing a genius lyric and a great melody, to being a brilliant producer and an incredible guitarist. My favourite thing about "Purple Rain” - beside the lyric - is that guitar solo.

Marcella: “Eric Clapton was once asked 'How does it feel to be the best guitar player in the world?' and he said 'I don’t know, ask Prince.' This song is unbelievable, it’s so emotive, everything about it is such brilliance. It’s simple as well, while it takes you on this emotional journey that is anything but simple.

Siobhan: “In 1992, we supported Prince at his request at Celtic Park in Glasgow. Both of us were huge Prince fans and my Dad used to take me to see Celtic play all the time when we lived in Scotland, so that was a double whammy for me.

Marcella: “He was a mysterious presence. After the show, our manager told us that about a quarter into the set Prince came up to the back of the stage with his band members and watched us for several songs. We had no idea what was going on, thank god!”

Siobhan: “I think “Drive-In Saturday” is a lesser remembered Bowie single, but it blew my teenage mind when I first heard it. With his words he paints abstract pictures of a world that you think you know - or you think you want to know - and it’s at once both strange and familiar. Then when it hits the chorus it’s so glorious and joyful, it’s very heroic.

"I would love it if people got that sense of storytelling from our songs. Revisiting our old songs, as we’ve been doing when we were putting this set together, has me wondering where the words came from and what was I writing about then. They’ve got that air of mystery, because when you’re writing, things come through you and you often don’t know what you’re saying or why.

“The really scary thing about songwriting is if you believe in manifestation: be careful what you write!

Marcella: “From my experience, it's like your higher self takes over. Your deeper purpose has this wisdom and this voice that needs to come through, so it’s up to you to open yourself up and let that happen.”

“Shakespeare's Sister” by The Smiths

Siobhan: “Well, we had to pick this one! Obviously we picked this because it’s where we got the name of our band from, but so many Smiths songs are great. I think Morrissey was the one who started that balance between humour and vulnerability, humour and pathos, all rolled into one lyric.

“He wasn’t afraid of showing the darker side of himself, the more fractured side, the bit that you might hide from people if you had any good sense. He’s got a killer sense of humour - at least in his lyrics. He can make you laugh and cry in the same song.

Siobhan: “What a great record, what soul! This kind of rock / soul sound is what we draw a lot of our sound from.

"On “See You Next Tuesday” from the new EP, the backing vocals sound kind of LaBelle-ish to me. There’s always been a thread of a Motown influence, and American soul influence, on our songs.

Marcella: “It’s a big influence over the years in our writing together. I grew up in Detroit, so Motown was all I heard all day, every day.”

Marcella: “Sly was really adventurous. He didn’t just do straight-ahead Philly soul – he really took it to church, and made it trippy, like nothing anyone had ever heard before. Really sexy too, and great musicianship, it's very inspirational.

Siobhan: “If You Want Me To Stay” is one of the greatest records ever made, I'll never get tired of this record. That bassline is one of the greatest basslines ever. It was the point of inspiration for one of our more well-known tracks, but we’re not going to tell you which one! You’ll never guess – it ends up a million miles away from the starting point, as it always does.”

Siobhan: “T.Rex are another band who have so many great songs. How to choose just one song by T. Rex?! I just like the poetic trippiness of the lyric in “Cosmic Dancer”, and it's a beautiful melody with great strings on it.

"There’s a little drop of humour in there as well. It’s a great glam ballad.”

Siobhan: “The first five Roxy Music albums are works of genius. I used to do “Street Life” as an encore at solo shows, and there are so many words in that song! Bryan Ferry’s lyrics are so dense and so poetic, so full of ideas and imagery, he’s a great lyricist.

“I love ‘70s Roxy because it’s art school, glam rock weirdness mixed with a nod to ‘50s rock ‘n’ roll, but in a twisted, idealised way. They were really out there, not just the way that they looked, but the way they sounded. They were the weirdest band and they were so popular, they were on Top of the Pops all the time. I consider myself blessed to have grown up in an era when you could have seen that stuff on TV and heard it on the radio constantly.

“Bryan Ferry has such a keen aesthetic, everything is exquisitely presented. Even if you see his solo shows, the lighting is amazing and the backing singers look incredible. He idealises beauty and lives for beauty, and beauty is what makes life extraordinary and special. Not just physical beauty - musical beauty, anything that can transport you from the mundane. His romanticism is very appealing too, even though it's a doomed romanticism.”

Siobhan: “What a brilliant record, it's the storytelling once again and the atmosphere of it. The story itself is a great cowboy narrative: the female character who completely tricks and seduces him, then drugs him and steals his silver spurs.

“The way Lee Hazlewood made these records sound was so beautiful and lyrical, with that psychedelic tinge. Nancy and Lee were a big starting point for our new EP for sure, but of course we started with them, then we had a wild goose chase and ended up somewhere different!”

“Have Love Will Travel” by The Sonics

Siobhan: “This was another influence on the EP, more of that soul and rock ‘n’ roll sound. We wanted something filthy and loud and swaggering. Some of the new songs are quite male in their sound and it’s good to appropriate that sort of thing.”

Marcella: “We’re both kind of tomboys and this swaggering sound is something that we think is going to be really fun to play live.”

The Ride Again EP is released on 25 October. Shakespears Sister tour the UK from 31 October, including a date at The London Palladium on 5 November.