Three women sit around a dinner table: they share a pot of coffee; they share the same platinum hair and the same kind, brown eyes. Decades intervene, and the ocean between them can feel unfathomably wide, but when they are sat together, piecing together shards of broken Swedish and English, their stories are the same, ripples borne from the same stone.

“Jag älskar dig”, Nina Nesbitt’s mother would tell her: a phrase that felt comforting and familiar, yet altogether estranged on the cobbled streets of Edinburgh where she was raised. But whenever she heard that word, Älskar, a translation of love in its many incarnations, Sweden, with its December snow, wooden houses and her grandmother, waiting for her at the dinner table, didn’t feel quite so far away.

It’s this relationship with home, never quite so straightforward as the place you were raised, but rather a wider tapestry of mothers and daughters, of loves and losses, that Nesbitt has spent the last three years reckoning with. And that’s why her third record could only ever be called Älskar. She knew that from the beginning.

The curtains raise with the song “Gaol”, love’s Gaelic equivalent. Together, they make a whole. They make Nina. “I wanted to write about the themes of love in all its raw forms,” the 27-year-old singer-songwriter tells me. Over synths that unspool with a timeworn crackle, she collects snippets of people around the world saying “I love you” in their native tongue and builds a chorus, an incredible spectrum, that captures her emotional ambition for the record. “I wanted it to feel like a big blanket you could put over your ears before you listen to the album,” she shares, “because the album is quite dark at times.” 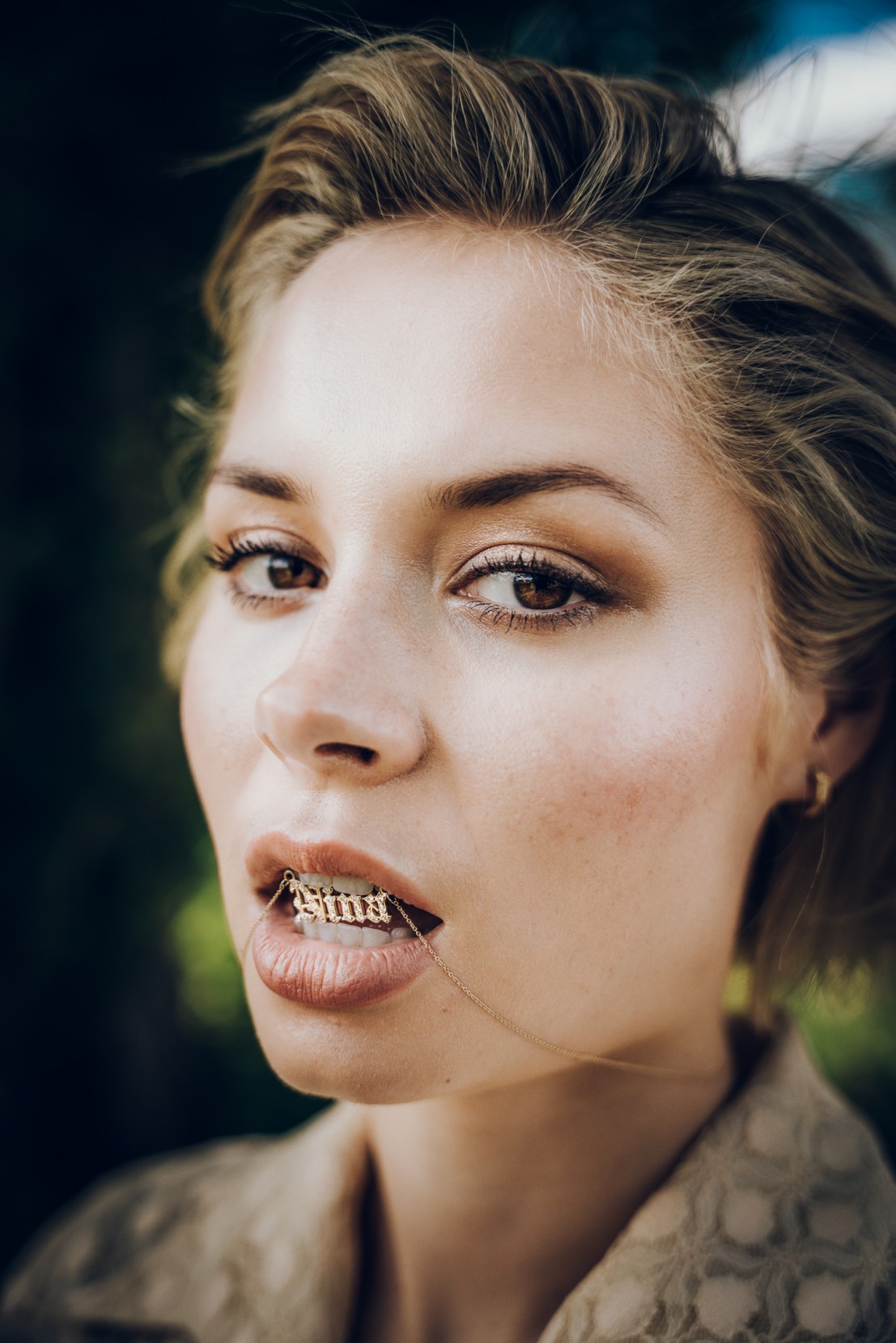 Nesbitt is noticeably absent from “Gaol” – instead, the record begins with the world around her. And while Älskar remains a fiercely personal record, the conclusions she has drawn about herself have been achieved through the lens of her relationships. “I feel like every relationship I had changed. The world as I knew it flipped upside down, in every aspect,” Nesbitt explains. She thinks about her relationship with her boyfriend of six years, Lower Than Atlantis’ Mike Duce, and how their commitment has intensified; how her friends have graduated, with jobs and lives of their own, and the way she feels that she’s needed to cling onto the bond she’s shared with them since she was a child against life’s relentless current; her relationship with her family, and, of course, with Sweden. She says: “Once you become an adult, you see everyone so differently, I think. The album is obviously about love, but it’s also about looking back, looking forward, looking around…”

The record has turbulent beginnings. In fact, Nesbitt never intended for her previous 2019 release The Sun Will Come Up, The Seasons Will Change to exist at all – let alone Älskar. After having been dropped by Island Records in 2016, she was prepared to quit being an artist altogether. “I became a songwriter, and I absolutely loved that,” she remembers. “That was definitely the happiest I’d ever been, when I was writing for other people. And then I accidentally wrote the last album through that. I just wanted to put out an album I loved. I didn’t get that opportunity with the first one. I was still figuring out who I was. But then it just did quite well and overtook any expectations I had. It was a nice surprise, but I never set out to make loads. But I’m glad it ended up this way,” she admits.

The pandemic splintered Älskar in its earliest incarnation when she was unable to enter Sweden to finish writing it. With nothing but her thoughts and endless hours stretched out before her, she ended up writing another album entirely, one which was strikingly darker. But when she listened to the more pop-driven, anthemic tracks like “Pressure Makes Diamonds” side-by-side with the sobering ballads like “When You Lose Someone”, a balm for the bleakness of grief, together, they left a bittersweet taste she liked. “I felt like they counteracted each other,” Nesbitt says. “The ones that are really deep and kind of depressing are balanced by the upbeat songs. I think you need that on an album, the ups and downs.”

While Älskar has proven, logistically, to be Nesbitt’s most challenging project, she acknowledges that without the introspection the pandemic afforded her, it wouldn’t be quite so personal. “I probably wouldn’t have delved that deep before,” she says. “I felt quite comfortable in my own company to just write and not care what anyone else thinks because there’s no one else in the room. I definitely used it as a form of therapy. I actually tried official therapy a couple years ago,” she shares, “because I was always that person who would tell my friends, ‘Oh, you should go to therapy, talk to someone’ – but I’d never take that advice myself. I don’t really like talking about things. I don’t know why. And yet, I write such personal songs. Therapy helpful, but now I look back and I think song writing is actually the best thing for it. It just feels really cathartic and helps me process things.” 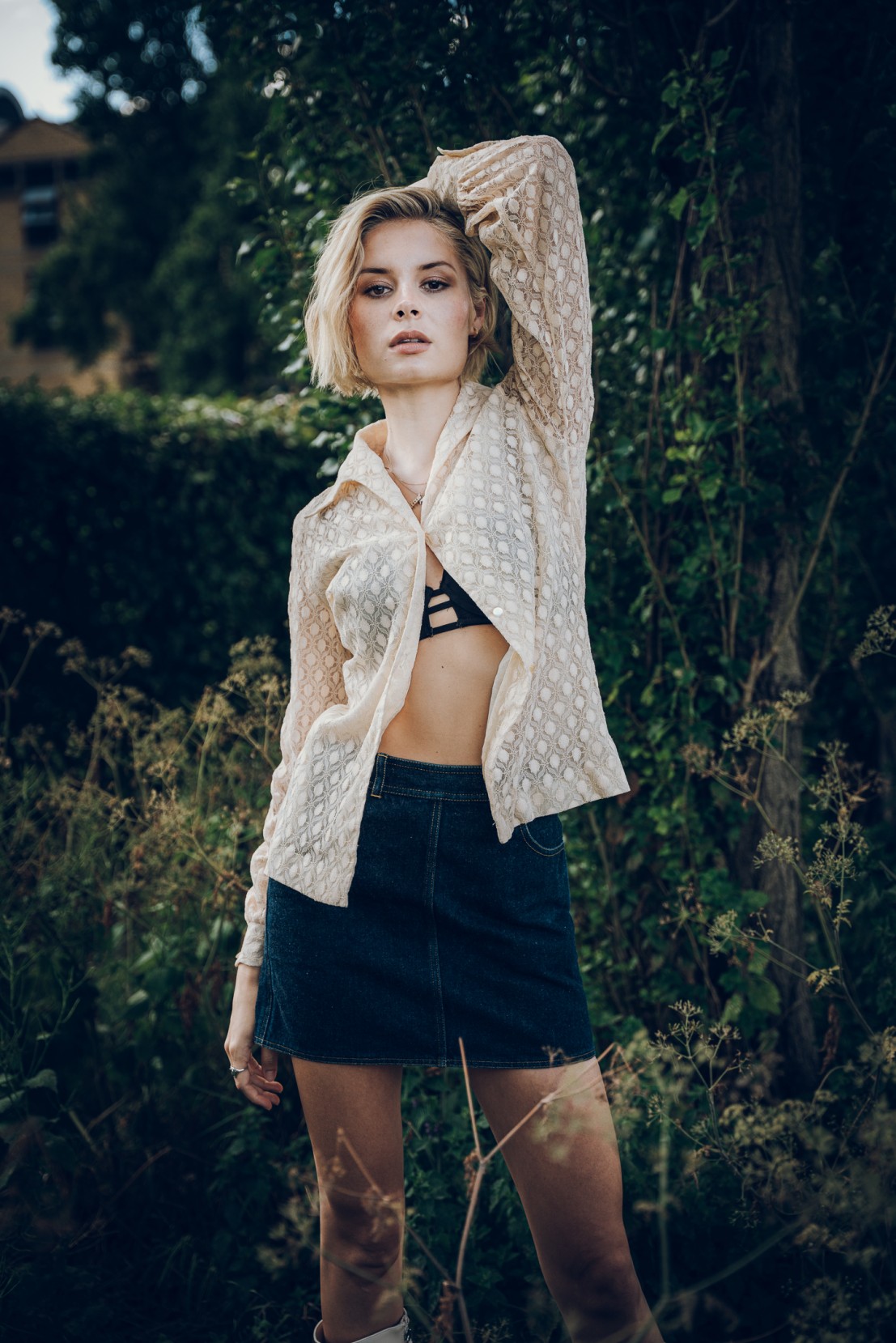 Those moments of tenderness, three minutes of shade from the sunshine of its pop hits, are the most telling. “Dinner Table” was written as an ode to her grandmother and to her own blossoming connection with Sweden, and through retracing her life, Nesbitt is reaching a greater depth of understanding about her own. “I always noticed that I was brought up a little bit differently to my peers in Scotland,” she remembers. Her Swedish mother was far more relaxed than others, more forthright with her words, unbothered by airs and graces. But it has only been in recent years that Nesbitt has had the chance to learn Swedish, after being more inquisitive about her nature and nurture have interacted to form the woman she has become. “As my gran is getting older, I realised I really wanted to get to know her more, as silly as that sounds. She’s always had broken English, and I’ve had very limited Swedish, and so we’ve never actually had a proper, in-depth conversation. The more Swedish I know, the more stories I’m getting from her.”

I ask Nesbitt to paint me a picture of her grandmother: “She swears. A Lot. She doesn’t realise how bad it sounds…” she laughs. “She was bleach blonde since she was fifteen. She only wears black. She only likes one side of her face. She used to be a ballet dancer. She’s an icon, she very much doesn’t give a shit, and she’ll just tell you how it is.” She insists they’re similar in many ways. “People say it’s nature versus nurture, but I swear it’s just nature, because we’re like the same person, and yet I’ve not been around her that much. It’s so interesting. We’re so similar even though she grew up in such a different time, when the world was a different place. It’s magical, just having a chat around a table. Little moments like that, you take for granted.” 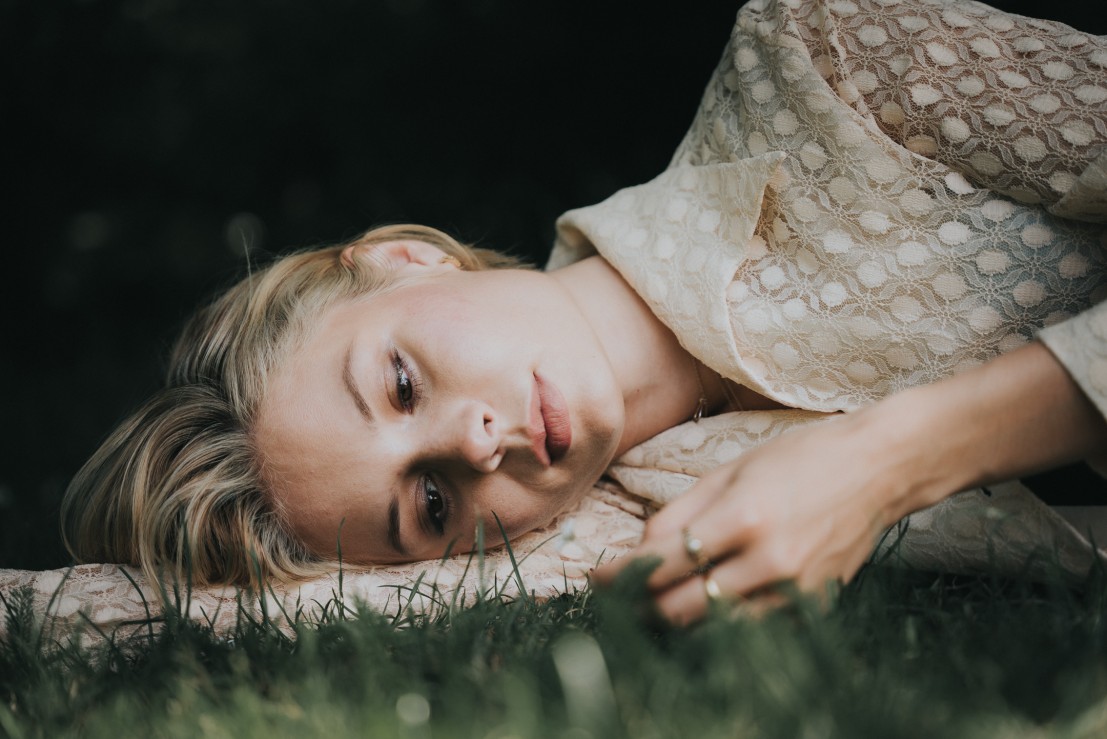 Nesbitt has also been presented with the challenge that eventually dogs all artists, for whom heartbreak is their bread-and-butter: she is in a happy relationship. “I feel like people know me for writing breakup songs, or writing songs about fuckboys,” she says. “But for this album, I was like, ‘Well, I want it to be more honest and authentic’, so there are quite a few love songs on there. I’ve probably really embarrassed him!” she laughs. Her track “Colours of You” is a finely-spun piano ballad, with strings to tie your heart in knots: “Your green lights when we’re driving after midnight / Those blue eyes that I know I won’t forget / And they might only see you in black and white / But I never do / I’m in love with the colours of you”, she sings, and “Heirlooms” is a gentle acoustic imagining of the gifts an imagined future child would inherit from them, while hoping to spare them of their darker sides. “Maybe this will give people hope that there are good guys out there, that you can be happy,” she offers.

Nesbitt turns twenty-eight in July. There are almost ten years between the woman she is now and the teenager with the red lips and bottle-blonde hair who released Peroxide, a collection of homespun folk-pop which we have to thank for the endless optimism of “Stay Out” and “Hold You”, a delicate duet with Kodaline. She’s no longer the girl in black skinny jeans, busking with her guitar through Edinburgh, holding her breath when she shows her ID at the door – Nesbitt is looking at her under an opposite sky of hard-won wisdom. “I feel like it’s the first album I’ve written after I’ve come of age,” she says. “I’m leaving adolescence behind. When I first started, I was more or less a child: I was fifteen when I got my first manager and set up a YouTube channel, and seventeen when I got signed. I thought I knew it all, growing up. I thought I was ready for it all. I look back, and I’m like, ‘Oh my god, you literally had no idea.’” 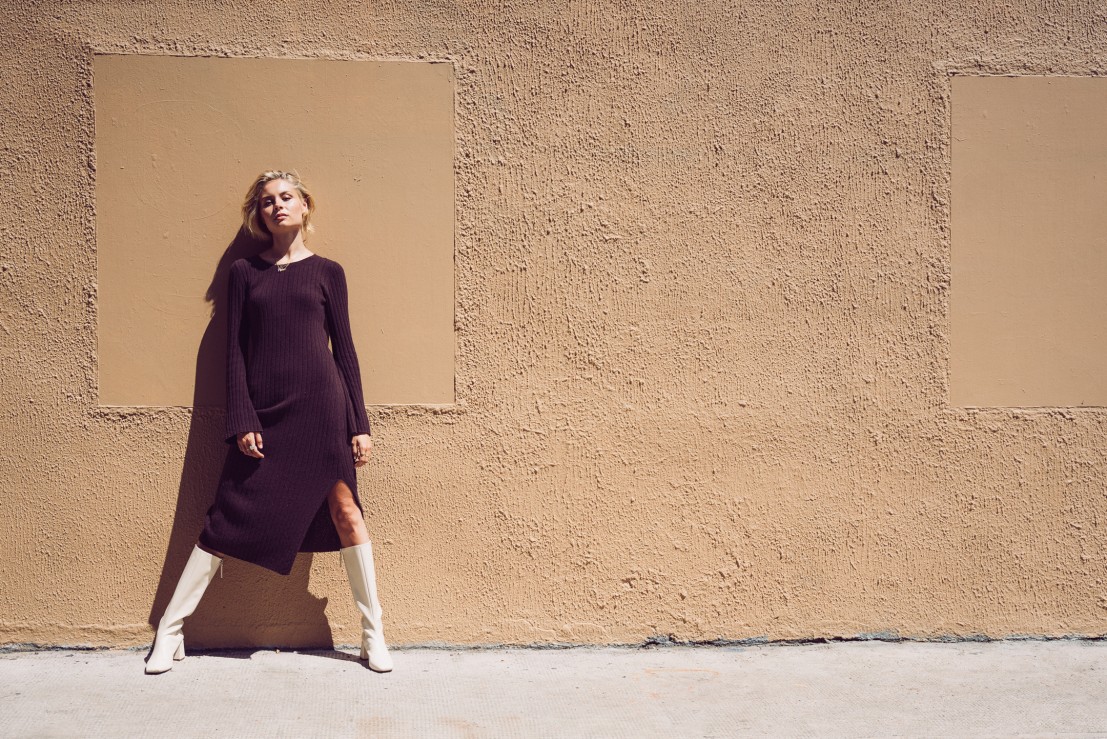 To survive pop music as a woman for nearly a decade is something few can claim, but that doesn’t mean playing the game has left her unscathed. “There’s so much pressure on women to keep it new, keep it exciting, keep evolving,” she tells me. “There’s this pressure I have that like, ‘One day, you’ll be too old’ – which is so not true, but I think from a young age, it’s been drilled into me that women have a sell-by-date in pop. I think it’s something I’ve internalised, even if I don’t believe it. I feel like I have to work extra hard and keep proving myself, because I’m like, ‘One day, I’ll be too old’. I have to keep fighting that in my own brain.”

The pressures she faces as an artist only compound those inherent to being a woman in her late twenties, where questions of marriage, houses and children are starting to tug at her sleeve. “Pressure Makes Diamonds” is one of the most frivolous tracks on Älskar, a reclamation of fun against suffocating social paradigms, which she describes as the cousin to her infectious hit single, “Loyal To Me”. “I wrote that when I had just turned twenty-five,” Nesbitt says. “That was when I felt my world started changing, like I entered the over-25 category in The X Factor, and everyone was asking me why I hadn’t thought about those things yet. Again, it just spurred me on to work harder and prove myself. I’m always really inspired by Dolly Parton, because she takes subjects like this and puts them into a really fun, upbeat pop song where you could sing along to it but wouldn’t even register what it’s about.” 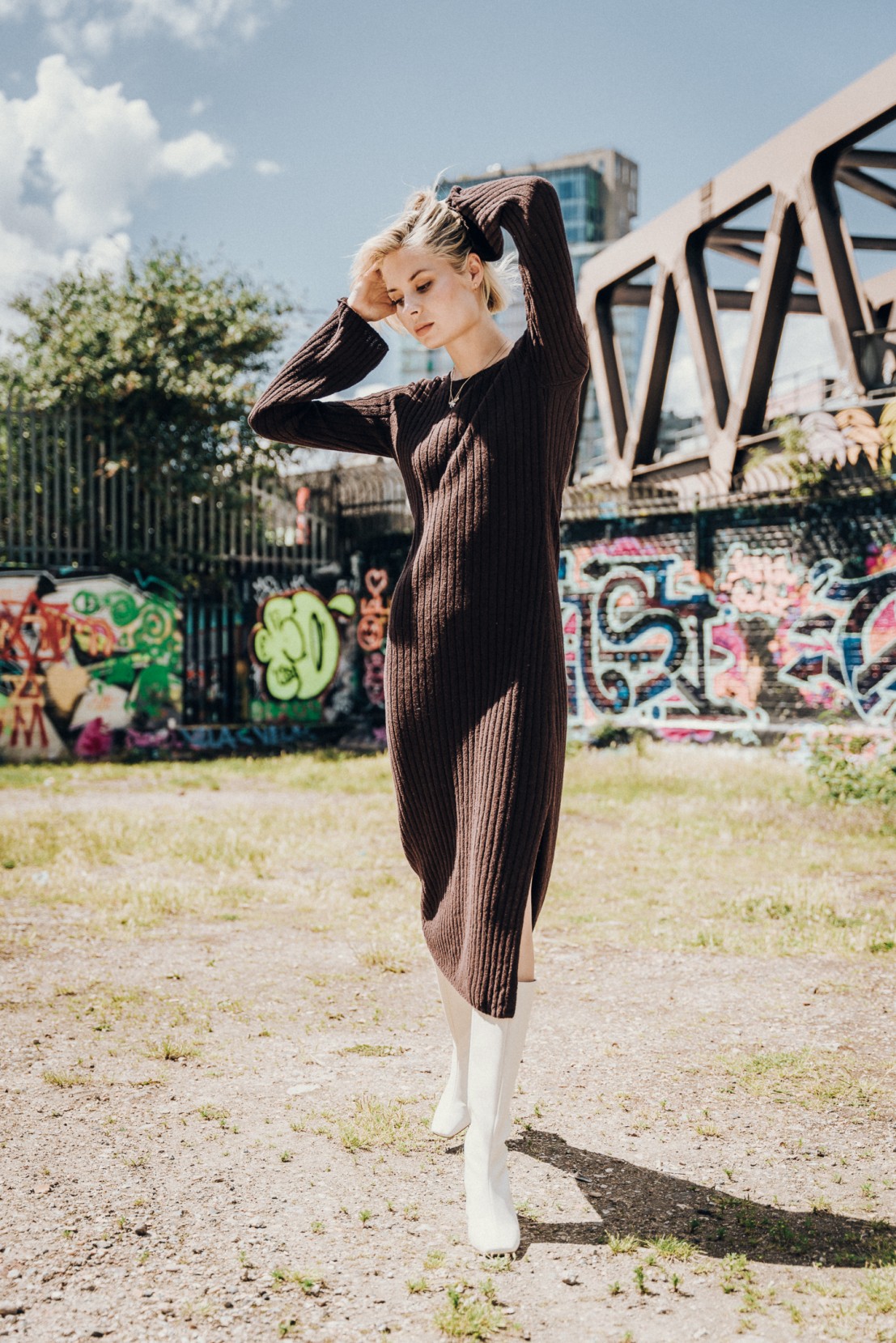 More than anything, Älskar has strengthened Nesbitt’s relationship with herself. At the other side of these often painful self-interrogations, she has arrived at some important realisations: “I want to really enjoy what I do and not take it too seriously,” she shares. “I think you can get really carried away with yourself and overthink things, and nothing is that serious. I think I’m in a position now here I’m just more confident in myself and my decisions. No one knows what they’re doing, so just do what you love. All I wanted was to make an album that felt real and honest. That’s all I wanted to do.”

Älskar is released on 2 September via Cooking VInyl