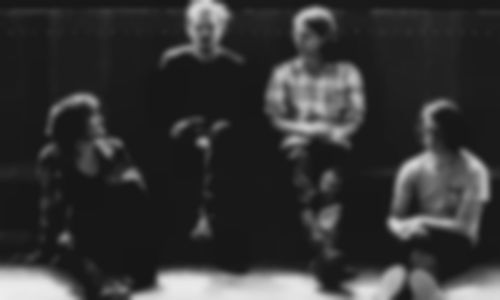 Over a year after it first saw the light of day in their native Canada, Half Moon Run will release their debut album Dark Eyes through Communion on 01 July, which, appropriately enough, is Canada Day.

The Montreal based band head to the UK this week for a run of shows including a performance on the Park Stage at Glastonbury on Friday. When he was touring the UK last year, Patrick Watson tipped them as his favourite act in Montreal. Since then they’ve been on what seems like a non-stop tour, playing shows with Metric, Of Monsters and Men, Mumford and Sons and Watson himself along the way. We caught up with Devon from the band as they travelled to Colombus, Ohio last month.

Although the band formed and are based in Montreal, you originally hail from Comox, BC and Ottawa. What bought you to Montreal, and how did the band get together?

Basically everyone came for different reasons. I had a job lined up and the other guys came for school. None of us knew each other – even though the other guys all went to the same high school and stuff they were in different years. We all met through a mutual friend basically, except me. I met through Craigslist. Our first jam was actually the first time we all met each other. It was pretty magical.

Do you remember what the Craigslist advert was?

They were looking for a bassist or a drummer. And I’m neither of those things but the writing and the influences were so compelling that I wrote to them saying “I’m neither of these but we should make something happen”…and they went for it. Dylan who was originally going to play piano took drums after a ten year break. So we shifted everyone around so I could sing and play guitar.

The band got picked up after just a few live shows, right?

Well, we didn’t play live for a long time. Indica signed us around our 10th show which is fairly early. We did a little Ontario tour of 5 dates and everything was pretty green. Then they wanted to break us in so we flew out to the west coast and cut our teeth. We recorded the album in which took 7 months and was very grueling: out west at first and then back in Montreal. It came out as a soft release in May 2012 in Canada.

In what way was the process gruelling?

I guess we were so obsessed with making it as good as we could that we kept having to redo stuff and rearrange parts. We were all working full or part time at the time so we would go into the studio at 6pm and go through till 2am, then do our jobs all day then go back and do it again. The scheduling was pretty grueling in that respect.

So, an elongated broken up process in combination with perfectionism?

It will be almost 13 months later that the album finally hits UK stores – does it seem strange to be starting to tour a ‘new record’ that you have been playing for over a year?

Comparatively it seems weird but I have no frame of reference really, and neither do any of us. It was a soft release in May last year so it took a while for things to pick up momentum wise. We maybe started really touring last September. But all said and done we will be doing two and a half/ three years on this record.