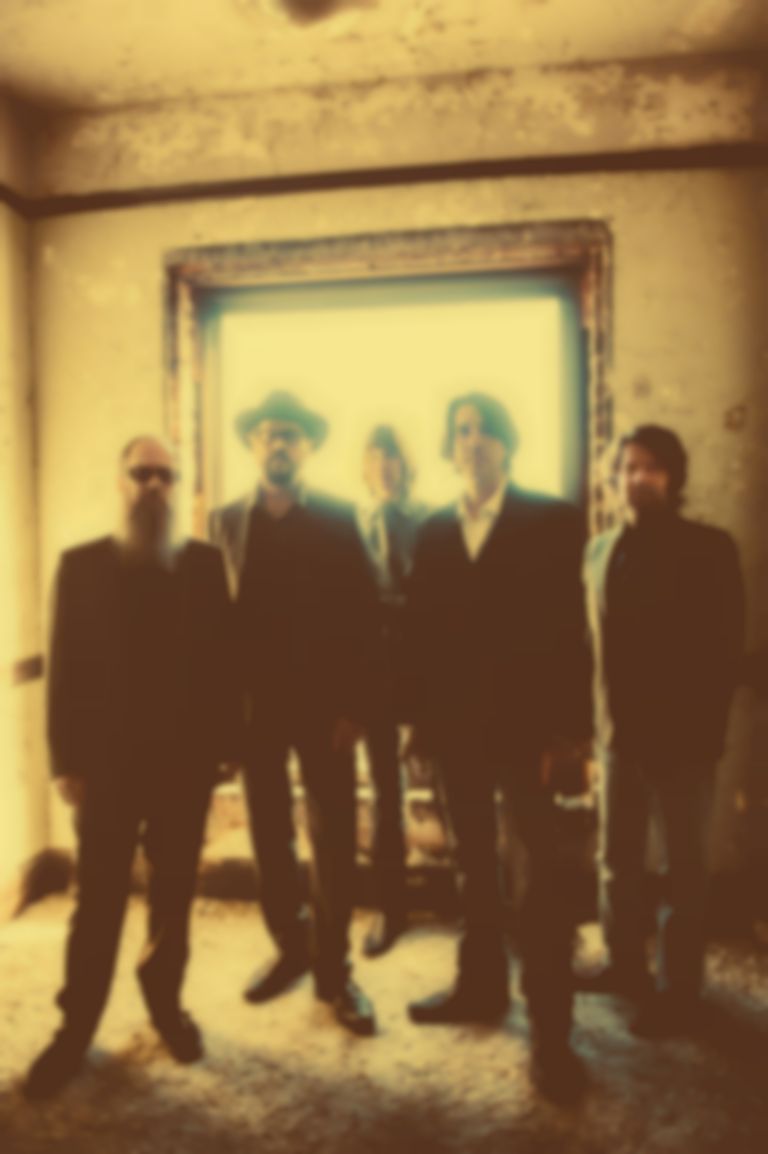 Founded in 1996 by talented songwriters Patterson Hood and Mike Cooley and having gone through many lineup changes since then, prolific Drive-By Truckers have emerged from the alt-country scene of the last two decades combining rock and Southern soul with the old music of their native Alabama, and showing an ability to capture (at times sarcastically) all aspects of human nature, even the darkest and ugliest.

After the longest break of their career, new album English Oceans is released on ATO Records today. The band got together at Chase Park Transduction Studios in Athens, Georgia and recorded all the new 13 songs over a couple of weeks with the help of longtime producer David Barbe. When I call singer and guitarist Patterson Hood on the phone he immediately sounds enthusiastic and willing to talk about the new album, which in a way represents a return to the almost visceral simplicity of their earlier works.

Though one of the characteristics of DBT is having two songwriter-vocalists, Patterson has always written most of the songs. But what immediately stands out on English Oceans is that this time Cooley actually wrote 6 of the 13 tracks, something that doesn’t have any precedent in the story of the band. “For some reason Cooley was extremely prolific this time around,” says Patterson, “which makes me very happy as I really love his songwriting. One of my favourite things about being in this band is getting to play his songs but on the last couple of records he wasn’t prolific at all, he almost struggled to write. This time he wrote half of the album and all his tracks are very strong, which is a real treat.”

Cooley also sings on one of Hood’s songs (“Til He’s Dead or Rises”) for the first time. Patterson confesses: “I would have never thought he would do that. That’s something I wouldn’t normally ever ask him to do. I originally sang on that song when we were recording and Cooley was putting the harmony on it, and while he was doing that I said ‘you know what? it would be better if you were singing this. Why don’t we switch parts and you take the lower part and I the higher?’. So we went to a separate room, we started singing together, and we were both happy with that. It then just took us 5 minutes each to record our parts and that was just perfect.”

American artist Wes Freed has done pretty much all DBT’s album artworks, becoming almost responsible for creating the artistic aesthetic of the band. He is usually sent the record and then he starts painting, but this time it was a bit different as Hood and Cooley decided to use a pre-existing painting, done for one of Freed’s friends. Patterson explains: “The three daughters of this friend that lives in DC commissioned Wes this painting as an anniversary present for his wife. He showed it to me and I absolutely loved it, and while making the record I kept thinking about it as that was what I wanted the album cover to look like. I don’t know what it means, but it’s the perfect cover and I just like how it all works together, the cover, the lyrics, everything.” He pauses for a few seconds and then he adds: “I think this record is more open-ended than anything else we have done before”.

There are 2 songs on English Oceans Patterson is particularly proud of. One is “Pauline Hawkins” which was inspired by a Willy Vlautin novel. Patterson is a big fan of Vlautin’s writing and particularly enjoyed his book Lean on Pete which was published a few years ago. They then met and became good friends. “Willy sent me an advance copy of his latest book called The Free and I loved it,” he tells me. “ I read it pretty quickly and then wrote that song the next day”. It was written from the point of view of one of the characters, Pauline, who is a nurse “that sees lots of horrible stuff and makes a hard life. To be able to cope she’s closing herself up and not letting anybody in. You can’t really get too close to her, she’s one of those people. I was very moved by the way Willy wrote about her character so I penned the song pretty quickly. We had actually already finished the album but the band reconvened to cut that song and swap it with something else to make it fit on the record”. Patterson considers “Pauline Hawkins” a very important part of English Oceans, so he was particularly excited when the label decided to make it the first single coming out on the 25th February. “I wasn’t expecting that as it’s a long song”, he adds.

The other track that means a lot to Patterson and the rest of the band is “Grand Canyon”, a tribute to close friend Craig Lieske who passed away in January 2013. “It was very sad,” he recalls. “ We didn’t have any idea Craig had any health issue whatsoever. He had probably had some minor heart attacks for months and nobody knew about it, I don’t know if he even knew. And then he had a big heart attack and died the day after we played a wonderful show”. Lieske had been a member of the Drive-by Truckers’ touring family for 7 years: “ After so long of being on the road together you just become very close. We were actually friends before he started working for us as before when I wasn’t touring all the time, I was working at the 40 Watt Club in Athens. Craig was one of the managers there”. Unfortunately the band had to play the whole weekend after Lieske passed away as they were doing a three-night homecoming stand in Athens,which Patterson remembers being pretty brutal. “It was hard to play every night and having that feeling when you lost someone you love so much and so suddenly,” he continues. “We were all pretty raw and I wrote that song on the last day of that tour. When I penned it I had already written most of the songs on the record, but I scrapped most of them and wrote some new ones as that song kind of reset something and what I had written before didn’t quite go with it in my opinion.” English Oceans is actually dedicated to Lieske: “We wanted to honour Craig with this album. I am pretty sure he would have liked “Grand Canyon” and the whole record”.