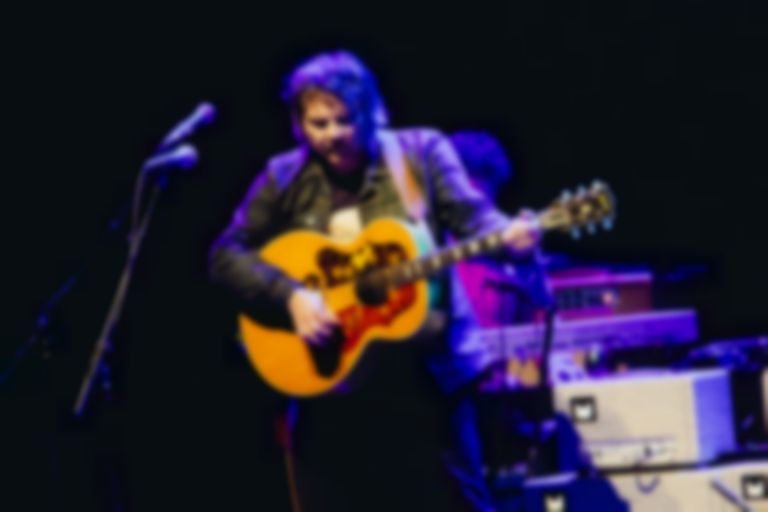 Many bands would instantly lose any sense of momentum - and possibly the control of their bowels - when faced with such a debilitating, prolonged technical meltdown in front of a sold-out crowd. Bandleader and songwriter (and, alongside bassist John Stirratt, the only constant in the line-up since Wilco emerged from the wreckage of Americana trailblazers Uncle Tupelo in the early 90's) Jeff Tweedy appears to view the situation as a bit of a challenge, and ripe material for comedy. "We've played all over the world and this has never happened before. That's Brexit for you," Tweedy quips, before moving on to consider the potentially ruinous effects of Donald Trump's presidency on the reliability of America's power supply.

It's the kind of an unflappable reaction that only hundreds and hundreds of shows and any possible on-stage calamity in the rearview mirror allows. It's probably no coincidence that Wilco's durable current line-up - at 10 years or so, this six-piece incarnation is virtually immortal in the history of a band whose earlier years were marked with regular internal strife - are pretty tireless road-hogs. While Wilco's records have struggled to reach the inspired, ever-evolving heights of their creative peak between 1996's widescreen alt. country landmark Being There and 2004's tense, angst-fuelled A Ghost Is Born in recent years, there's not a whiff of routine to tonight's two-hour set at Manchester's Albert Hall (18 Novbember). Tweedy must have sung "Jesus Etc." - one of Wilco's best-loved songs - hundreds of times, but tonight's delicate, beautifully nuanced rendition, a highlight in a set sprinkled with genuinely special moments, suggests he only wrote it yesterday.

Starting off slow with a couple of predominantly acoustic cuts off stripped-down new album Schmilco, with the vibrant live renditions of the new material outperforming their deliberately murky studio counterparts, the subdued start soon emerges as evidence of an unrivalled ability to pace a show. The sped-up coda to a turbulent "Art of Almost" - the electricity issues by now thankfully resolved - sounds all the more explosive for the relative calm of what's preceded it, the band by now playing with the kind of telepathic intuition and razor sharp precision that enables them to stretch the boundaries of the material without slipping into self-indulgence.

Some might say that something - let's call it 'edge' in want of a more meaningful term - has perhaps been diluted as Wilco have become more stable. What we get far outstrips any minor reservations, however. Taking in every stage of Wilco's journey from "A Box Full of Letters" from the band's country-rocking 1995 debut AM onwards, it's remarkable just what enormous fun an evening in the company of a band whose set is sprinkled with such outbreaks of desolation and heartache as "Via Chicago" - complete with a noise meltdown that resembles a musical equivalent of a violent thunderstorm - and a fragile, hushed "Reservations" can be. It takes some doing to orchestrate audience participation at the best of times, but Wilco get the crowd to chant the monster riff to "Spiders (Kidsmoke)" (also remarkable for its atonal solos, which Tweedy performs largely by punching - rather than actually playing - his overdriven guitar) like our lives depended on it.

"Maybe all I need is a shot in the arm," ponders the chorus of the final encore. After all the years and countless gigs, Wilco are in no need of artificial stimulation.