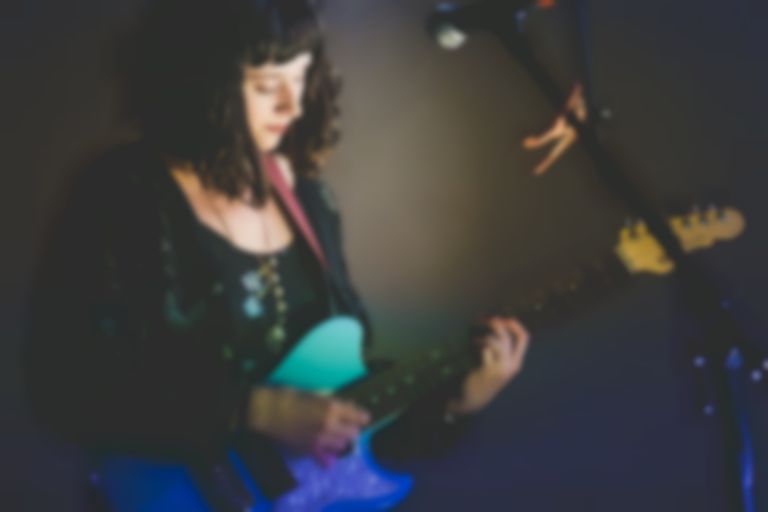 When an overseas act heads to the UK to enjoy their biggest headline show in London to date, it’s normally all about them being in the spotlight. However, in a shared celebration of new albums and burgeoning success, two of Wichita Recordings best bands, Waxahatchee and Girlpool, came together for a display of the best of what indie rock still has to offer at London’s Electric Ballroom tonight (10/06/15).

Waxahatchee may have been the headliner and more seasoned act, with her third album Ivy Tripp released within months of Girlpool’s debut When The World Was Big, but this all-American indie pairing was entirely in the spirit of camaraderie. With a lot of fondness clearly existing between the two, the whole night had a palpably big sisterly feel.

What the LA-based Girlpool do best is offbeat harmonies and sugary sweet lyrics over unfancy guitar hooks and vibrating bass. For this special occasion Waxahatchee had apparently temporarily loaned them her drummer for their rendition of “Crowded Stranger”. Veering them into a full band sound, it could have been a taste of the natural progression of Girlpool, although once over, it was good to return to what is the essence of this duo; two teenage best friends making bedroom rock about their day to day lives and the people they encounter.

The introspective “Cherry Picking” and lo-fi tale “Nora” were both highlights, delivered with their trademark meaningful stares and some captivating face-scrunching from guitarist and lead vocalist Cleo Tucker. Their onstage charm is so great that no one really cared they failed to complete album title track “Before The World Was Big” due to some undisclosed technical difficulties.

Where Girlpool’s slightly messy and organic approach is their niche, Waxahatchee - or 26 year old Alabama singer-songwriter Katie Crutchfield to her mum - is certainly a more polished entity. Having reached critical acclaim with her third and much beefier full band album Ivy Tripp, this was an opportunity for her to show off the layers of her more complex sound. And so, she was joined by her twin sister on guitar and vocals, as well as a third guitarist, bassist, and occasionally a keyboard player. The change from her older material is staggering on record, but live, it's really come into its own.

There are certainly - and surprisingly - more elements of soft rock, with some husky choruses and parts where you could be forgiven for drifting off into your own thoughts, but what makes Waxahatchee so arresting is the desolation within her lyrics. Crutchfield didn't disappoint, setting the tone of her set with the regret-filled but ironically floaty opener “Lively”. “Blue Part II” further showed off her melancholic side, but interestingly the softness of her voice was noticeably at odds with the slightly defiant chords being strummed, hinting she's far tougher than she looks.

The obvious downside to having a full band around you is that in places, Crutchfield's delicate vocals were slightly lost within the haze of noise, with some of the magic evapourating in the mix.  A more stripped back portion to end the set cured this though, where the band melted away leaving her lonesome but powerful for solo treatments of “Grass Stain” and “Swan Dive”.