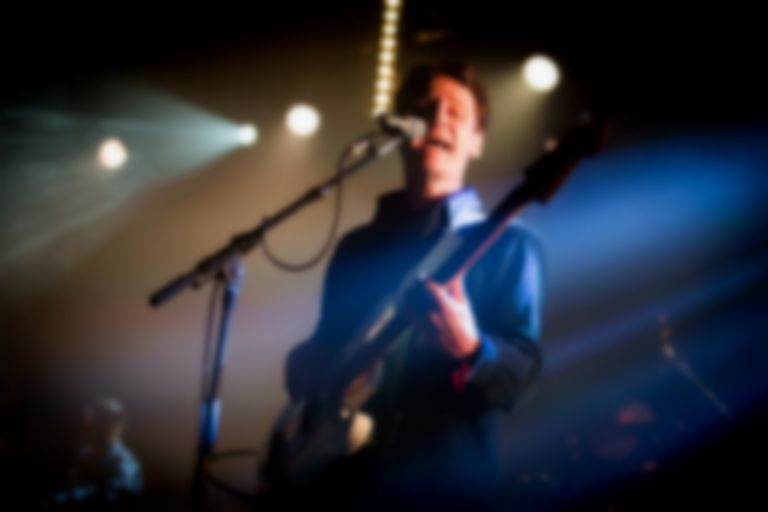 It’s the first Monday of September in London, so naturally its overcast with a relentless drizzle of rain. Spending time in the company of Teenage Fanclub however, you forget about the onset of autumn, so sunny are their songs and the atmosphere they create live.

Having played a rapturously received set at the End of the Road Festival the previous evening, tonight (5 September) at Islington Assembly Hall, Norman Blake, Raymond McGinley and Gerry Love, flanked by drummer Francis MacDonald and Dave McGowan on keyboards, play a career spanning set that’s a joy to behold.

Opening with “Start Again” Blake’s lead vocal is bolstered by Love’s superlative harmonies, who then takes the vocal for “Don’t Look Back.” For all the drizzle and cloud of London, the humidity makes the venue swelteringly hot, a perfect fit with the warmth of the music.

They complete a heady opening four song salvo with “About You” and “I Don't Want Control of You" and they give themselves and the audience a chance to gasp for air as they slow things down with "Sometimes I Don't Need to Believe in Anything", after which Blake quips that the new The Beatles Live At The Hollywood Bowl record, clashing with the release of their new album Here will make it ‘tough going for the number one slot’.

The songs from Here played tonight slot into their formidable songbook seamlessly, and what’s to be marvelled at is their musical chemistry and the deceptive simplicity of the songs. New single “I’m In Love” is blissful with stories of relationships and music - the guitar solo cribs The Beatles “And Your Bird Can Sing” - but what’s so consistently fantastic about Teenage Fanclub is that as soon as you hear a new song of theirs it’s unmistakeably them, from the pristine harmonies to the glorious jangle of the guitars and their phenomenal delivery. And that delivery is wrapped up in a consummate love of music - before a wonderfully giddy “Sparky’s Dream” Blake plays the chords to The Who’s “Can’t Explain”

They close with “The Concept”, the only song tonight from their breakthrough album Bandwagonesque and when Blake sings the opening line “She wears denim wherever she goes, says she's gonna get some records by the Status Quo, oh yeah…” there’s a heat in the room that feels like it’s fighting the onset of autumn. As its twelve-bar boogie succumbs to the magically slowed coda, their harmonies soar all over the room. Their voices are all very different, Blake’s is worldly wise, McGinley’s introverted and Love’s dewy-eyed, but they complement each other beautifully.

The encore starts with “I Need Direction” and the phrase ‘perfect-pop’ seems the only description, it’s wondrous.The ‘ba-ba-ba, ba-ba’s’ harmonies sound like the most simple things to sing but that’s where their skill lies, making what would be clichéd in less talented hands sound timeless.

“Everything Flows” is as ever the last song and even though it was released just over a quarter of a century ago they attack it with such zeal it’s like they’re playing it for the first time. We caught up with Blake after the show and he described it as an ‘infinite song’, that can be played for as long as they feel they want to.

The fact that they can omit classics such as “Neil Jung” and “Alcoholiday” and play a nineteen song set that never dips in quality is a testament to their craft as songwriters. Tonight was a beautiful celebration of love - the love that they write about in their songs, that they have for each other and with the audience. If love is an endless summer then Teenage Fanclub are the soundtrack to it.

Setlist:
Start Again
Don't Look Back
About You
I Don't Want Control of You
Sometimes I Don't Need To Believe In Anything
Hold On
The Darkest Part of the Night
The Past
Ain't That Enough
It's All in My Mind
Verisimilitude
Thin Air
I'm In Love
Your Love Is the Place Where I Come From
Sparky's Dream
The Concept
---Encore---
I Need Direction
Can't Feel My Soul
Everything Flows