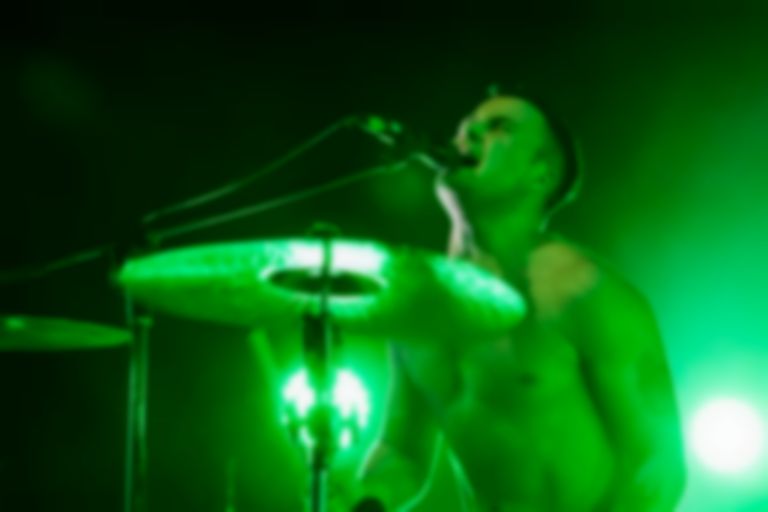 Slaves have spent the last few months playing tiny venues as part of their Back of the Van tour, returning to the days when they cut their teeth in dirty pub back rooms.

Now the 2,000 capacity Shepherd’s Bush Empire is hardly as whites-of-your-eyes intimate as The Trades Club in Hebden Bridge, but given the immediate carnage that ensues when Slaves walk on stage and smash into “Sockets”, this could be any other dripping sweat box in the country.

On a first glance, Slaves are an unlikely mainstream success, but think about it a bit more and it makes perfect sense. The noise that the punk duo - stand-up drummer and shouter Isaac Holman and guitarist Laurie Vincent - make is red-blooded, ugly and seething with anger – just what people need in 2016, a year of political and social mindfucks we’ll all be glad to see the back of. Their rejection of ignorance and monotony has struck a (dis)chord with the hordes who have catapulted their steel toe-capped racket onto huge stages and those same hordes are swarming tonight in a sold-out mass clamouring to hear new songs from Slaves’ second album Take Control.

Naturally, Isaac and Laurie don’t disappoint. Isaac’s shirt is off before the start of “Play Dead”, a primal stomp of crunchy guitars that lumber like a hungry Tyrannosaurus. “Same Again” is next, a frantic burst of scrappy guitars and a howl of defiance that Isaac delivers with bulging eyes and flying spit. “Consume Or Be Consumed” is an incendiary wakeup call to the brainwashed, even without the presence of album producer, Beastie Boys’ Mike D. Instead, Isaac raps his verse with ease: “You’ll eat what you are fed, breathe in the dirty air people.”

Of course, Slaves’ bitter pill comes with a side of silliness. “Fuck The Hi-Hat”, is a 45-second rampage about a lack of drums. “Girl Fight” is even dafter and shorter. Laurie’s dad pops up on stage and later the band’s pal who “used to dress up as a mantaray” isn’t in costume but flaps onstage anyway before performing an undulatory stage dive into the crowd. “Look after him”, notes Laurie with a grin, watching his mate’s legs disappear below a pile of twisted bodies.

Take Control saw Slaves embrace a degree of sonic progression that enables them to mix up their set and “Angelica”, which has both lads strumming guitars, and a melancholic “Steer Clear” break-up the bish, bash, bosh. It’s only momentary though and the set finishes, just as it started, baying for blood with a rabid “White Knuckle Ride” and “Spit It Out”. Slaves don’t offer solutions to the world’s problems. Instead they offer catharsis, an outlet for rage and disaffection and thank God for that. The world is a scary place right now and we need bands like Slaves more than ever.