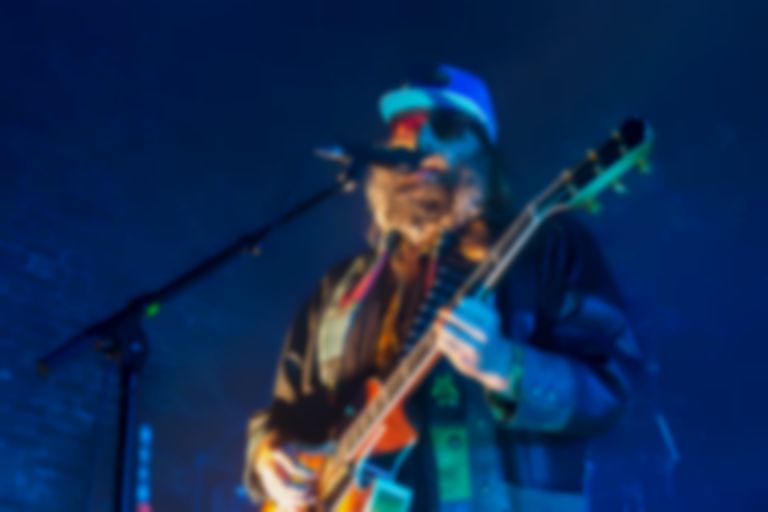 As Sébastien Tellier emerges on stage and gets his gig underway, any epilepsy sufferers in the crowd face an array of potentially seizure-inducing stimuli. It’s hard to say what represents the greatest risk: the rapidly alternating red-and-green lights on stage, or the French singer, songwriter and multi-instrumentalist’s dangerously loud Vivienne Westwood suit. Also sporting a cap, oversize sunglasses and his trademark beard, the 39 year-old Daft Punk associate looks like a sort of louche 1980s trucker, pulling into London for petrol and perversion in equal measure.

“My name is Sébastien Tellier. Cheese, red wine, sausage,” he continues, beginning the first of many increasingly nonsensical soliloquys that jostle with the music for equal attention throughout the show. Somebody asks if they can smoke too. “No! I can because I’m the singer,” Tellier fires back. “You can take cocaine or LSD of course. I took one tab right before the show and now I feel so cute. I also did too much cocaine, or maybe not enough.” Perhaps the former, your correspondent would venture.

The packed (and heavily francophone) Village Underground audience is soon treated to the singer’s chemically-enhanced thoughts on everything from the paucity of his fee for the show (200 euros, apparently) and his record label’s skewed priorities promoting new record L'Aventura, through to hanging out with Barack Obama in his dreams and the merits of US TV show True Detective. There are also some deeply misguided jibes about Mexicans stinking up Los Angeles; base-level Bernard Manning (or perhaps Dieudonné) humour with all the subtlety of a sledgehammer.

In mitigation, it’s worth remembering that Tellier trades on ironic controversy and has already become rather an enfant terrible of the music scene back in his native France, famously singing largely in English on representing his country at the Eurovision Song Contest back in 2008. The hard drugs can’t exactly have aided Tellier’s judgement tonight either. All the same, there’s something unedifying about standing next to a woman of Latin American heritage shifting awkwardly on her feet at a gig while the guy on stage rants away about “dirty Mexicans.”

Still, with one or two exceptions, the music is at least first-rate. New single “Alles vers le Soleil” comes off like a gorgeous sonic safari while “La Ritournelle” benefits from a beautifully pared-back chorus yet sounds as momentous as always. In fact, such is the strength of the performance itself that Tellier somehow manages to make a success of the night, regardless of whether he happens to be wearing a golden cape and beating his roadies up with an inflatable penis between songs.