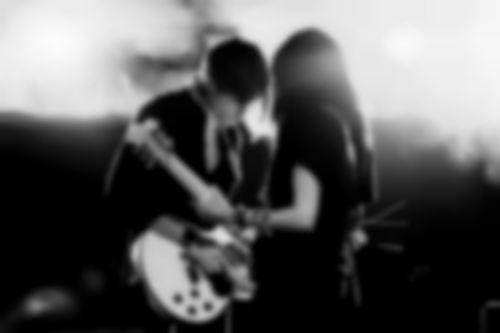 The Norwich Arts Centre is a small sub-300 capacity venue, with high ceilings and church-like pillars that lead to the stage and support band Telepathe had their electronic equipment set up in such a way that made it look like a makeshift sermon was about to take place. Their 30 minute set started in subdued circumstances as the girl duo waited sheepishly for their computer to boot up. Once it did Melissa Livaudais and Busy Gangnes let loose a cascade of experimental beats that shot at you from all angles. The third track ‘In Your Line’ was the highlight as a continuous driving drum beat gave it a nice rhythm for the other bleeps to float around. This brought the attentive crowd on side, though their set was not helped by the vocals being too low in the mix and the finer details were sometimes lost in the pulsating bass, which at times shook the room.

School of Seven Bells consist of ex-Secret machines guitarist Benjamin Curtis and Alejandra & Claudia Deheza formerly of On! Air! Library! and have recently released their debut album Alpinisms to much critical acclaim. Curtis took centre stage and provided the musical backdrop for the Deheza sisters to show off their stunning melodic voices. Alpinisms opener ‘Iamundernodisuguise’ kicked off proceedings here and while Alejandra & Claudia displayed an infectious innocence, Curtis looked the ultimate rock star. Clad in black and displaying shoe-gazer floppy hair, he regularly thrashed at his guitar like he was in a rock band rather than an electronic dreamy art-pop band. But ultimately the combination works and they compliment each other well.

The warmth of the album was encapsulated here but at times the songs were given a harder edge as the beats came increasingly to the fore, culminating in main set closer ‘Sempiternal-Amaranth’, as its relentless club beat built up and intensified for ten minutes of pure breathless joy. Other highlights in the ten-song, hour long set included the beautifully dreamy ‘Half Asleep’ and album closer ‘My Cabal’ where the vocal melodies really stand out and lift the song into something special. Benjamin Curtis’s departure from Secret Machines certainly raised a few eyebrows at the time, but once you see what he’s been up to with School of Seven Bells it may well have been a justifiable decision.