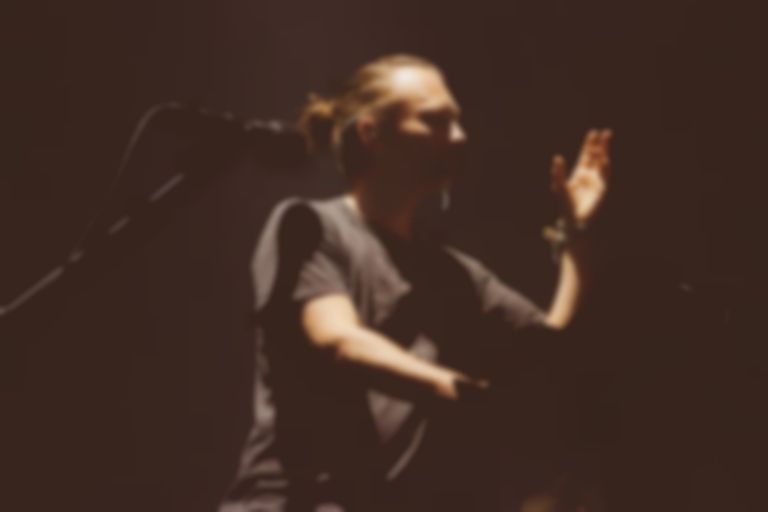 The admiration of tonight’s (27 May) crowd is so palpable it regularly drowns out the music they’ve paid to hear.

To be fair to them, there’s nothing particularly remarkable about how loud they’re being - they’re reacting exactly as one should when presented with the sight of their favourite band in a venue much smaller than you’d usually catch them playing. But for reasons I cannot figure out, as the sound at the Roundhouse is usually impeccable, it’s bafflingly quiet in here tonight. You can quite easily have a conversation with the person stood next to you without raising your voice, and sadly, many do. You have to strain to hear Johny Greenwood’s solo on “Airbag”, when it should have been ripping through you like a jolt of electricity - and to hear it played note perfectly, but fall so flat, is genuinely a bit gutting.

Their marvellous new album A Moon Shaped Pool is a largely gentle affair, and the tracks lifted from it suffer least from the bizarre lack of volume that plagues the set. “Daydreaming” is transformative, the live debut of “Glass Eyes” a sumptuous melancholy delight, “Ful Stop” a masterpiece of subtle power and incessant rhythms - the band’s best song in many years. For these new tunes, people aren’t yet bellowing the lyrics at the top of their lungs, but they listen with intensity, and stand stunned in wonder.

Really, that new album finds Radiohead on the form of their lives, and watching them so dutifully recreate its subtle complexities in front of your eyes feel like an honour. By contrast, when they dip in to the many hits of their back catalogue, it almost feels too easy; watching Radiohead do “Street Spirit (Fade Out)”, “Karma Police” and even “No Surprises” these days is akin to watching Christiano Ronaldo just take penalties. OK Computer was rightly lauded as a masterwork upon its release, but these days, even music that studious feels slightly beneath them.

This Friday night Camden crowd don’t agree with me, as each of the aforementioned trio of songs is greeted with rapture, and yelled with wild abandon. But the obvious crowd pleasers do not find the band operating on anywhere near the level they hit on “Weird Fishes/Arpeggi”, “Everything in its Right Place” or an incendiary “Idioteque”. Here, Radiohead feel like a different band entirely. Different from what they were, and different from what anyone has ever been, perhaps.

That’s why I’m actually pretty livid about the sound, you know. This was an excellent set, with something to delight every Radiohead fan no matter what part of their canon they most preferred. But everyone had to work for it, to consciously try to block out their fellow fans around them for fear of distraction, rather than communally get lost in something that could have felt blissfully overwhelming.