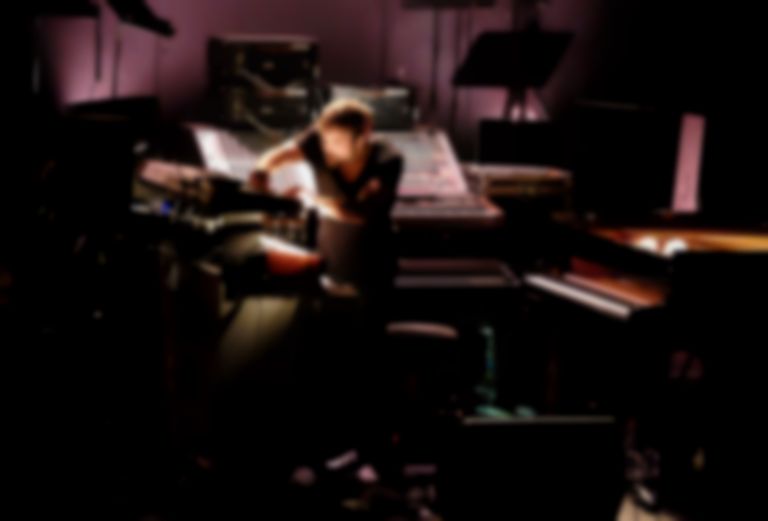 Whatever day it is, there’s always some sense of festivity at London’s Brutalist arts complex, the Barbican; this evening, however, felt particularly special with Nils Frahm’s highly anticipated return to the venue.

The last time I’d seen Frahm at the Barbican was about two years ago – it was a solo performance that was part of his Spaces album tour. This time, he was back with a decidedly more ambitious agenda, curating a three-day residency, entitled Possibly Colliding, that included an array of performances, screenings, and talks. The performance on the first evening, aptly billed A Most Ambitious Concert, involved a staggering three-hour performance from Nils, during which he would invite friends and collaborators to perform on stage with him.

The crowd gave a heated reception as Frahm jumped onto the stage, tip-toeing precariously across the masses of amps, instruments and wires that sprawled across the floor. “I’m three times as nervous this time, so I’m just going to talk it out for a bit,” he half-joked on the mic, before heading straight into a fresh new rendition of "Says", which was still the majestic, awe-inspiring set-opener as when it was first released – so much so that a large chunk of the audience gave a standing ovation afterwards. 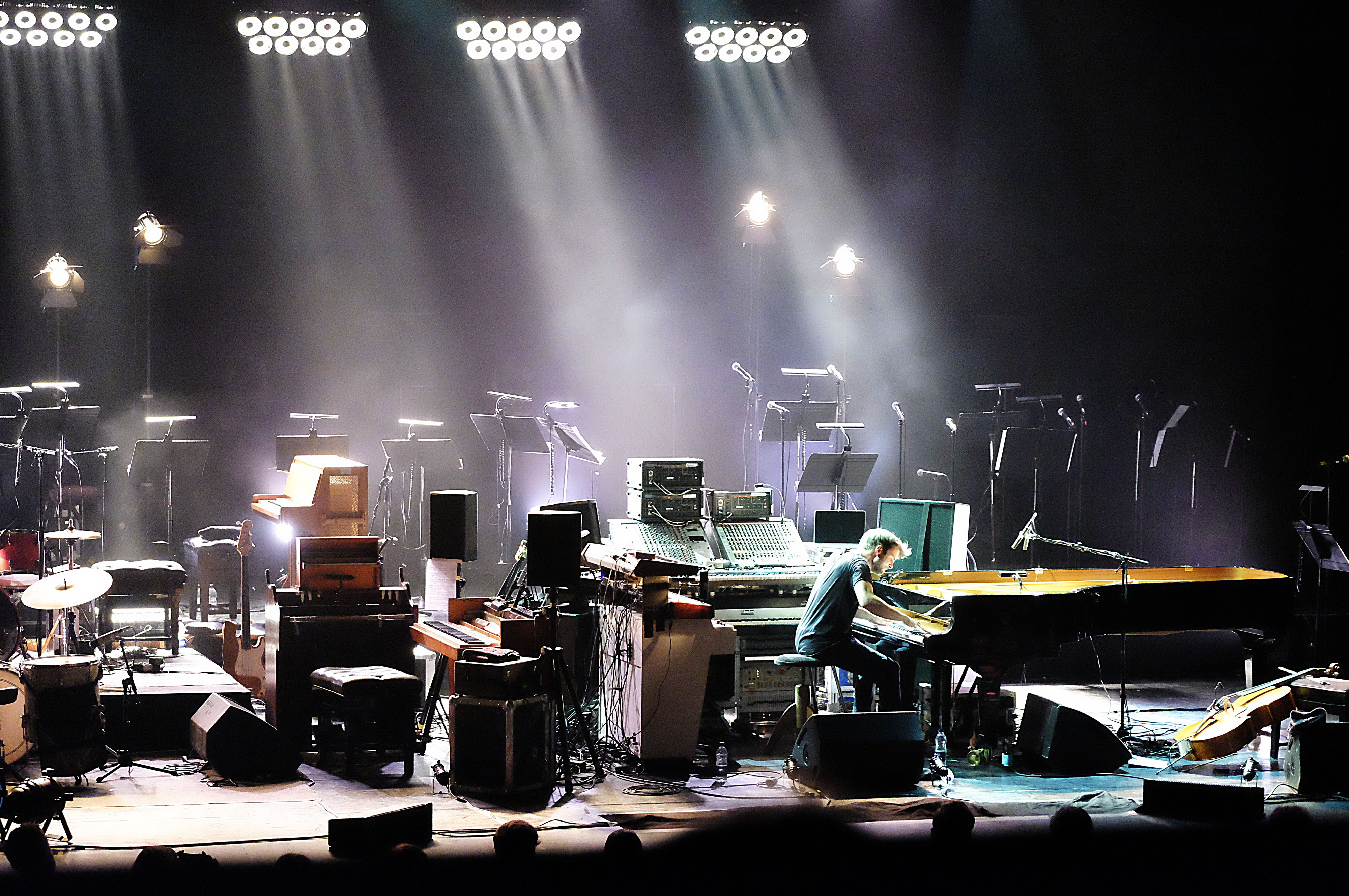 What’s so engaging about Frahm is his versatility and his ability to draw upon multiple influences – whether it’s classical, jazz, minimalism, or indeed electronic. The second piece, possibly forthcoming material, was a foot-tapping trip hop/IDM hybrid, and illustrated the stylistic breadth of his set-up, which included a couple of synths, a pipe-organ Frahm made himself (which, as he explained, was actually located somewhere in another building and hooked up to an on-stage keyboard due to feedback issues), a grand piano, a treated upright piano (Una Corda), a somewhat humorous kinderklavier, plus a drum machine and delay and reverb modules. At the centre was a large mixing desk where he displayed a consummate control of his hardware set-up, always tweaking, adjusting, EQing, throughout.

The first guest of the evening was Anna Müller, a cellist whom he collaborated with on his award-winning soundtrack to Sebastian Schipper’s film Victoria. Together they gave a spellbinding performance of "Anne", which provided something more introspective and featured some great timbral work from Müller, who created spine-chilling tones, alongside Frahm who delivered rippling chords across the keyboard.

The pace picked up with the driving synth loops of "#2", which brought things up to breaking point, before transitioning swiftly onto the acoustic piano for a note-perfect rendition of fan-favourite "Hammers". 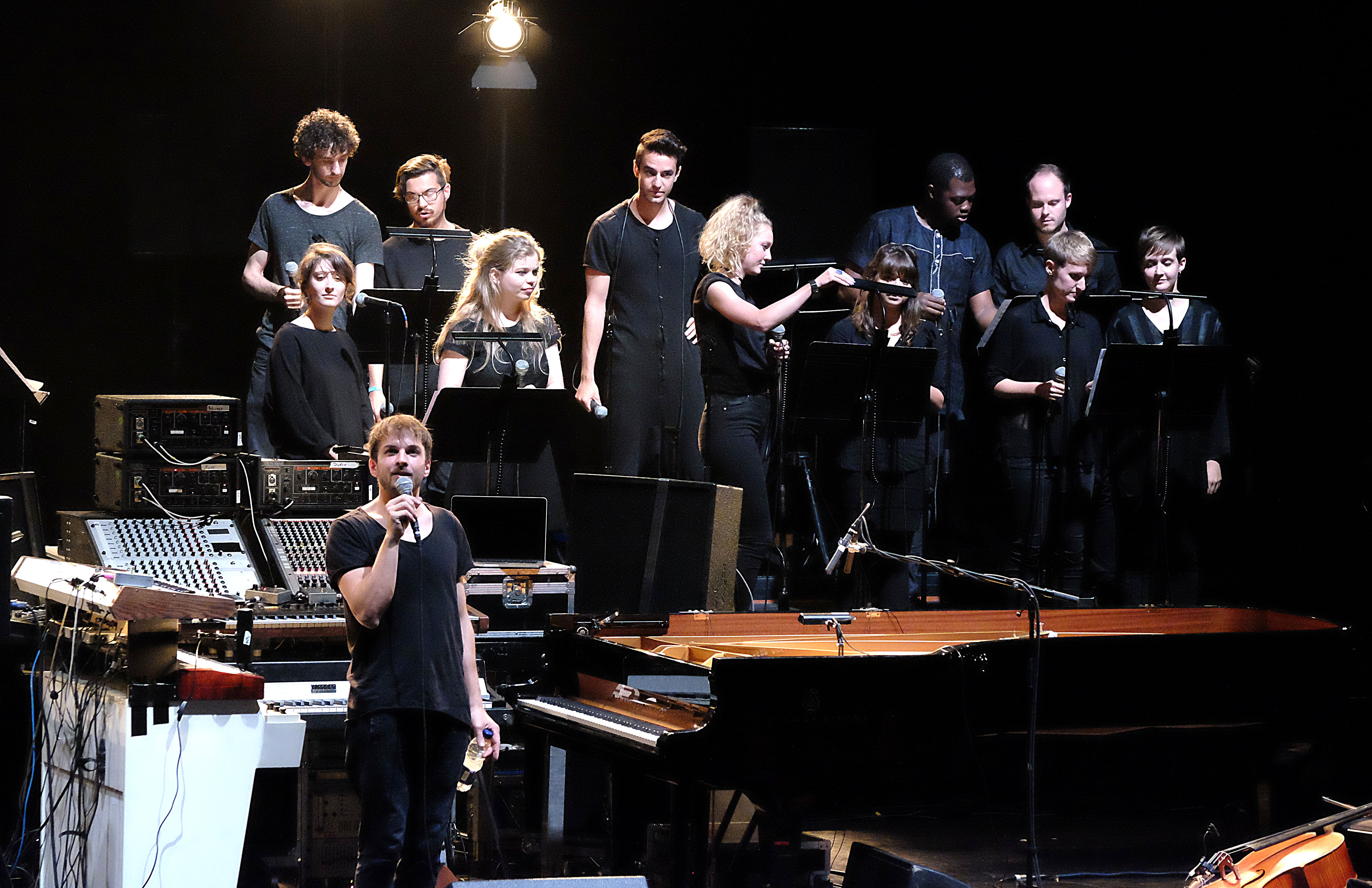 Afterwards Frahm briefed a story of some old childhood friends in Hamburg who came together through making music. They would be separated due to the Cold War, only to be reunited decades later. The perfect cleanser, four-piece band nonkeen came onto the stage to play some of their signature tracks off their debut LP. The vibe was chilled, dusky, layered with a sheen of melancholy. The ensemble was tight, and the change of instrumentation really kept the whole room locked in.

A standout moment was when one of two of nonkeen’s drummers, Andrea Belfi, erupted into a virtuosic drum-percussion solo, working up the crowd through snare rolls and pummelling tom hits. The crowd cheered Belfi on as he thrashed close to self-implosion, eventually subsiding as Frahm softly brought the keys back in. One would believe that had Belfi not lost one of his sticks to a dark corner of the stage amidst his creative outburst, he would have carried on. 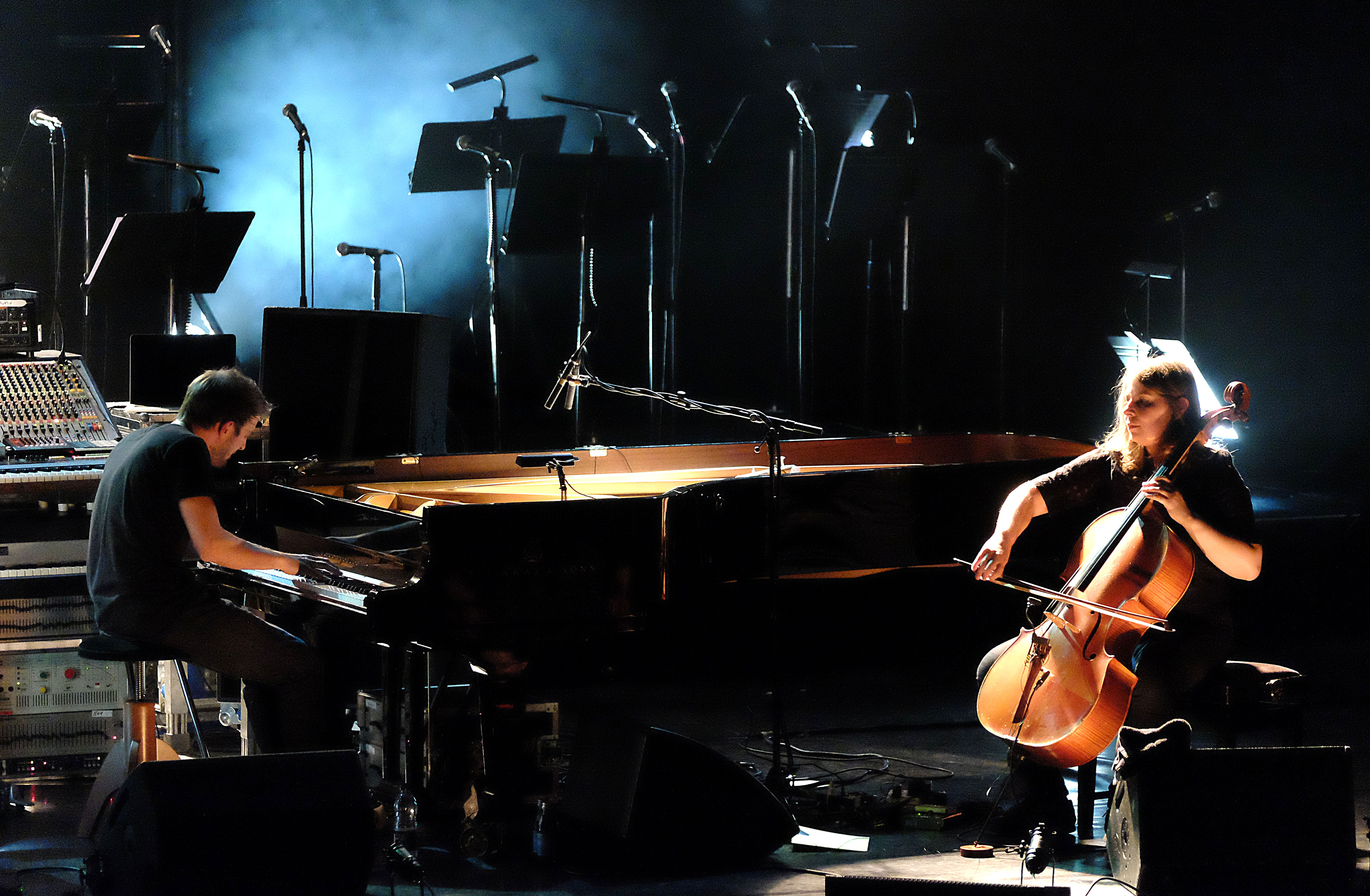 Another highlight from the whole evening was a rearrangement of "All Melody", which included the addition of a choir. The ensemble was stunning: piercing harmonies, full-bodied chorus, sweet, yet strong and projecting tones. One of the revelations from the concert was how well many of Frahm’s pieces translate into a larger orchestration, bringing out new elements, and realising some of his musical ideas in a grander vision. This was a perfect example, and it was clear that the whole audience was a bit speechless after witnessing the whole thing.

The second piece was a new composition, a "world premiere" that experimented with both Frahm and the choir director conducting simultaneously, using coded hand gestures to shape various elements of the choir’s sound. This was the first time that he had worked with voice, and one wonders why he hadn’t done it sooner. This was arguably the concert’s apex, and a refreshing diversion from the heavily instrumental music that had preceded.

The concert propelled forwards with a highly polished performance of "Toilet Brushes/More". There’s something anarchistic about using toilet brushes on a Steinway concert grand, and the novelty definitely hasn’t worn off yet. 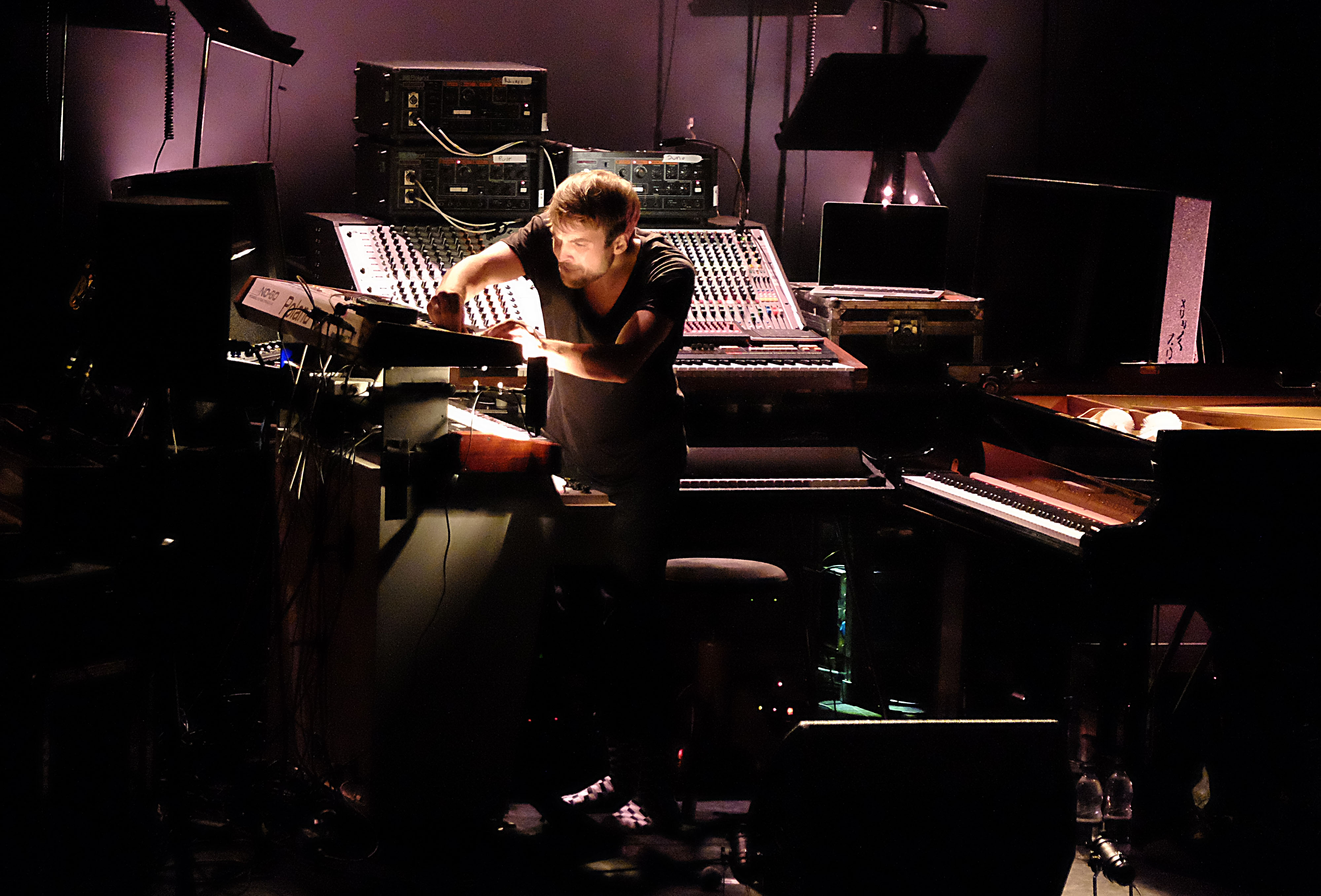 Things came to a momentous conclusion with an encore from Frahm and Stargaze – a small chamber ensemble that consisted of strings, brass, woodwind, and a celeste. Once again, this featured a full live performance of one of his most beautiful pieces, "Tristana". It was uplifting, maybe even a little cathartic, and closed things off really nicely. At this rate it probably won’t be long before you’ll see Frahm performing with an orchestra of some sort.

At three hours long, and no interval, it was quite a feat to pull off such an engaging, varied, and well-executed performance. A Most Ambitious Concert was a fatiguing but thoroughly enjoyable evening that left me feeling nourished and a tad reflective.

Frahm is at the height of his powers and this weekend was proof of his multi-dimensional capacity to create and inspire. One would be wise to possibly collide with him on his next tour.