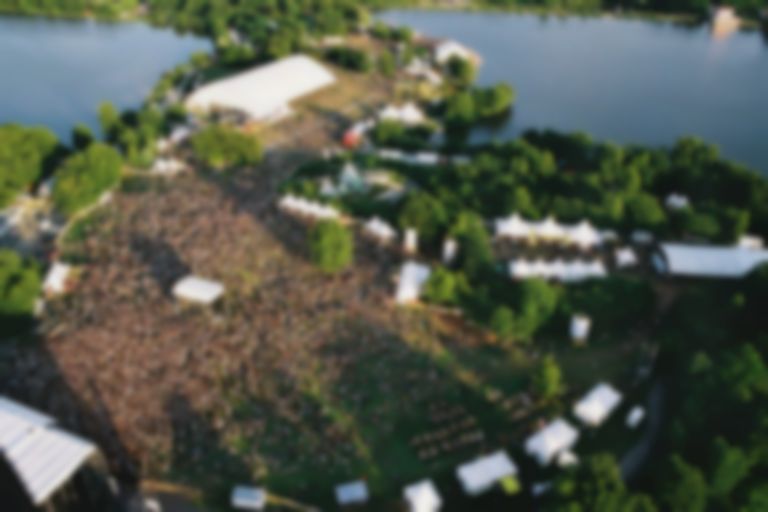 Having caught the earliest of flights on minimal sleep our first day in Belfort starts off pretty slowly but as the sun sets the French Glastonbury comes into a life of its own, helped along by the sounds of Joey Bada$$ and Major Lazer.

Wandering around, attempting to get to grips with the site layout the first act we catch is Gary Clark Jr. but his brand of American blues rock leaves a bad/dry taste in our mouths so we quickly hop over to the beach stage to see French synth-pop duo Juveniles. Jean-Sylvain Le Gouic and Thibaut Doray offer up 80s indebted disco oriented sounds with a touch of New Order romanticism thrown in. It’s busy, heavy, slightly chaotic in a manner that perhaps Metronomy used to be – though they’re certainly slicker than that UK counterparts.

From slick, hair raising electronica to 90s slacker aesthetics, Parquet Courts take to the festival’s smallest stage and pull probably the smallest crowd they ever will. They look a little fazed by the handful of revellers milling about, opening their set with a distorted, meandering, almost unrecognisable version of their National anthem in celebration of Independence Day. Highlights come in the first half of their set with ‘Borrowed Time’ and ‘Careers in Combat’ as what could actually be classified as a crowd eventually gathers. Their set certainly dwindles in the middle but the fast paced rhythms and low, warbling vocals of ‘Stoned and Starving’ tops things off perfectly. For all the arguments surrounding their derivative nature, the American four-piece manage to prove their own worth to a initially disinterested group of onlookers.

The Mercury award winners are up next on the bill, and as the sun sets over the lake it would be quite hard to put a foot wrong. Running through numbers from last year’s An Awesome Wave the stage looks pretty empty but the crowd is anything but, grooving their way through ‘Breezeblocks’, ‘Tessellate’ and bopping their heads to the winding beats of ‘Matilda’ and the – I always think – slightly Lemon Jelly-esque ‘Something Good.’

We try to see Jamiroquai but could barely get over the hill to the main stage for festival goers in sombrero’s eagerly awaiting the hat wearing funk master. We hear the tinniest version of ‘Virtual Insanity’ before resigning our hopes of actually experiencing his set properly and head back to the beach.

“When I say Major you say Lazer … I want everybody to take off their shirt … Everybody jump … Everybody get as low as you can!” Ahh Diplo, you’re so demanding. Not that anyone else here seems to mind though, they’re all too enthralled by the late night beach atmosphere to argue. We can’t really blame them though. He and his cohorts take the set from the Harlem Shake to House of Pain to Nirvana in the blink of an eye. It’s pretty impossible to not have fun in some way, whether you’re laughing or dancing. With the sun firmly behind the hill tops, the relentless energy of the night’s last set seems to finally instill in a restless, stumbling crowd that the festival has begun.