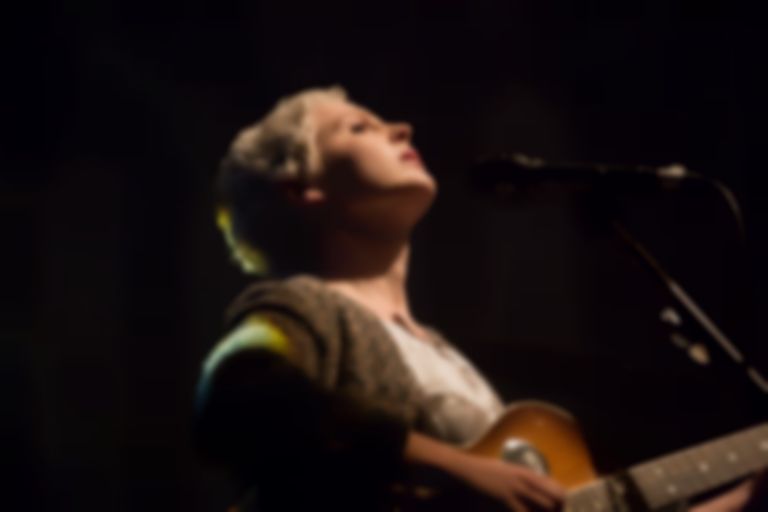 “A woman alone is not a woman undone.”

Laura Marling stands centre stage, isolated by the almost candescent white of the pinhole spotlight. She’s returned for an encore, a rare treat not often afforded to her audience, but tonight – the second of four shows at London’s Queen Elizabeth Hall – the rapturous applause is rewarded with Short Movie bonus track “Daisy.” We later learn it’s her dad’s favourite. Though the end of the evening may seem a strange place to start, it’s Marling’s words that – whilst so softly sung – speak so loudly to her life, and music.

Swapping the English countryside for America’s West Coast in 2014, Marling has spent much time alone of late – from driving across the country’s great expanse to setting up home in LA. She had scrapped an entire album’s worth of material and has spoken about how she considered giving it all up. Far from a woman undone, Marling emerged with the title track from her now released fifth album, Short Movie, in December of last year – in which she defiantly and so perfectly declared “It’s a short fucking movie man.”

Tonight, those words appear towards the end of Marling’s 90-minute set, one that sees a time lapsed desert tableau takes the sky from sunrise through sunset and beyond into the starry night. The presence of Joshua Tree (where we assume the backdrop was filmed) and the position of the sun loom large over a set of distinctly American narratives that take place at sunrise or dusk. Marling’s sharp tongue doesn’t hesitate to deliver the word “fucking” to a polite and attentive audience, but her smile is audible when the word “shit” escapes her mouth during this evening’s second song “Walk Alone”.

She showcases a muscular set of songs, but it’s those whose strengths lie in their vulnerability that shine when laid bare. Opener “Howl” is performed solo before her three-piece band assembles around her for a mesmerising conclusion. Her voice is as elastic as it ever was, jumping from murmured low tones to strained high pitches without pausing for breath. Everything is elegant and eloquent, with old songs, like “Rambling Man” and “Goodbye England”, are updated to make room for Marling’s growth - and for the addition of various electric guitars that have made their way into her arsenal.

Marling’s sound is stern and wry in equal measure, but tougher than ever before – her fingers making light work of complex guitar structures and her captivating voice delivering tales of leaving, loving, losing, belonging and home. It’s intense, as homecomings after a long absence are want to be.