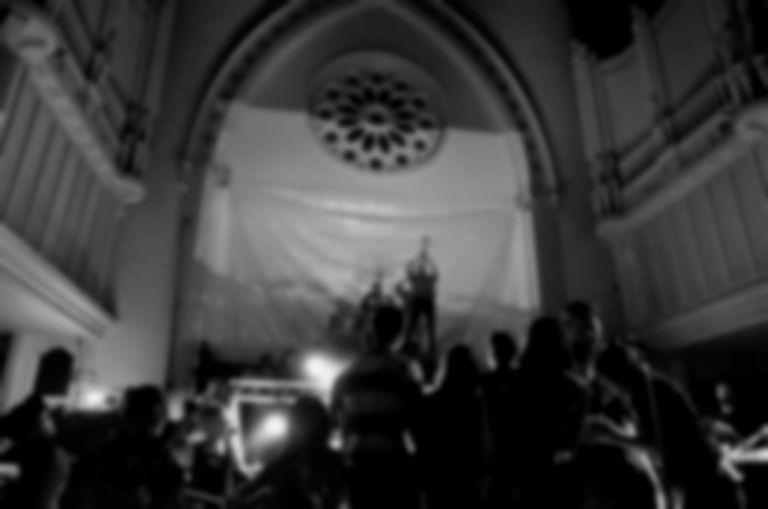 After last year’s visit to Halifax Pop Explosion, the biggest festival on Canada’s East Coast, a return visit in 2011 was always on the cards. Now in it’s 19th year, the festival has grown hugely in the past few years, drawing in the best talent from Canada and some choice overseas picks too round things off. It was with pleasure that we accepted their invitation to host our own showcase at the festival- and the show at the Bus Stop Theatre with local (via the UK) Paper Beat Scissors, Giant Hand, The Provincial Archive and Snailhouse was a great success- word had clearly gotten around about the show- even a local cat (apparently a local legend, and clearly with impeccable taste) got in on the act. Our thanks to all the acts and all at The Bus Stop for the show.

With a line up boasting big headline shows from the likes of Dan Mangan, Timber Timbre, Chad VanGaalen, Fucked Up, Stars and The Rural Alberta Advantage there was plenty of big name shows to take in. However, it was perhaps the local boy Rich Aucoin who stole the big show crown- putting on a dazzling extravaganza to launch his debut album. Having just returned from a showcase at Iceland Airwaves that saw him crowd surfing on an actual surfboard, the show in St. Matthew’s Church was true spectacle- Aucoin enlisting seemingly the entire available population of Halifax musicians to perform part of an 80 strong back-up band. Horn Section, Three Drummers, at any one time, Sitar, a huge choir and numerous guest vocalists. Indeed, at one point performing a song made up entirely of one line duets, Aucoin making each vocalist stand behind each other in line due to the lack of space onstage, before bounding through the crowd and up to the pulpit to add his trumpet to the horn section. While such a show could have easily overwhelmed the songs, thanks to Aucoin’s knack of writing anthemic space-pop hooks (of the kind the Flaming Lips used to do so well), paired with his patience in honing them down over the years, they stand on their own.

While there were plenty of ‘big ticket’ shows, TLOBF took the opportunity to take in some of the array of local artists and showcases that might not have otherwise come up on the radar. Supporting the mighty riffs of Jeff The Brotherhood (who spent most of their first trip to the East Coast amongst or above the crowd), Cold Warps were a fuzzy power pop delight. There’s no pretense or overarching message here, just smart songs played fast and loud, and it’s all the better for it. If you wanted to find music with a message, however, you could find it in abundance in the shape of hip-hop outfit Kou Chou Ching- who come across like a Taiwanese take on Public Enemy. Fusing traditional Taiwanese folk instruments with beats and rhymes, the passion in the performance conveys the heart of the message. We also managed to take in a spellbinding set from former Oh! Canada showcase artists Kite Hill (playing as a duo) and The Weather Station, who played a quitely brilliant set of modern folk, featuring guest vocals from Misha Bower and Matt Cully. Hushed and simple, Lindeman’s new material is a world away from debut The Line, but equally as affecting. While Lindeman’s solo show was a hushed and reverent affair, just an hour later at The Bus Stop Theatre her performance as part of Bruce Peninsula was a world apart- the multi voiced secular choir creating a gritty and organic force, a sort of inclusive secular gospel music, propelled by the choir of voices and tight rhythm section. Despite over-running there alloted time, the band continued when neither the audience nor the venue managers would let them go without playing a further set of songs. There was something cathartic and triumphant about the set: a powerful showing by a band clearly revelling in the live environment.