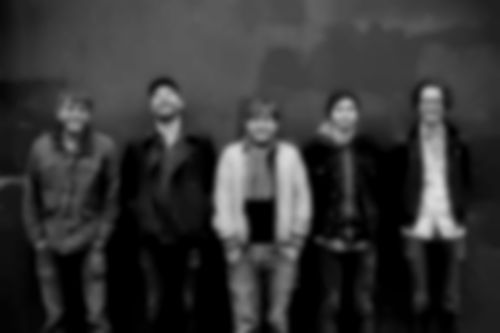 Heartfelt. Serious. Or worse: Earnest. A few words so unfashionable as to pass for single adjective jokes. A few words, among many, that will scare off the majority of discerning music fans in the modern age. This, of course, is down to their misuse and misappropriation. If you were to come across a band that were able, somehow, to rehabilitate terms such as these, to wrest them from the greedy hands of the unsuitable, the unworthy – that’d be something wouldn’t it?

It’s the first truly cold night of Autumn and on the well worn streets of East London one of those unsuitable types, Kelly Jones (of them there Stereophonics) is looking for 93 Feet East. This doesn’t bode well. Inside there are a couple of hundred dedicated fans packed into a madly oversold room and as the heat overwhelms the chill of the evening, the embrace of Frightened Rabbit pulls us into its sweaty chest.

In a set that concentrates, perhaps surprisingly, on 2008’s Midnight Organ Fight for much of it’s duration, there’s still a lot to take away for those thirsty for new material from the Selkirk natives. There’s the slow-turning gut-wrench suplex of their forthcoming EP title track ‘State Hospital’, their most sonically adventurous proposition to date with it’s jutting beat and clambering structure gently complimenting the more familiar formula of vertiginous build to crescendo and wide-mouthed chanting – “Her heart beats like a breeze block thrown down the stairs/Her blood is thicker than concrete/Forced to be brave she was/Born into a grave” cries Scott Hutchison, the Frabbits endlessly charismatic, beautifully bearded leader to the general marvel of the gathered throng.

On the acoustic driven ‘Boxing Night’, introduced as a tale of spending a post-breakup Glasgow Christmas alone in one’s pants drinking beer and listening to Billy Joel we find the oft visited themes of heartbreak and abandonment renewed with a wink of black humour (“Good glasgow could burn to its timbres tonight and I’d barely blink an eye”) , a hint of survivor spirit ( “a breath and a pulse/Of a heart that is kicking as though it is desperate to be born”) and a good dose of blind desperation (“Call me up anytime/Call me whatever the fuck you want”). It’s a magnificent stride of a song.

The best of the newies comes in the shape of ‘The Oil Slick’, a track that will feature on next year’s full length LP, and boasts a sloping, angled bass riff that drives the five-piece into a desperate, awkward lunge toward furious and strange territory. It couldn’t be any further away from the fucked up folkiness of their earliest work and is all the more enthralling for it.

In fact, as Grant Hutchison pounds out the driving rain patterns of ‘Modern Leper’, as Billy Kennedy’s guitar squalls on ‘Fast Blood’ and all of their voices power up in union on ‘Swim Until You Can’t See Land’ the idea of Frightened Rabbit being some kinda alt-folk band becomes more and more ridiculous. They’re more like the E Street Band. Every moment is ripe with emotion, every note struck with skill and intent, and you could believe that every time Scott goes for that high C note (and that is often) it has the potential to raise the room to a state of semi-religious hysteria.

While Gordon Skene comes armed with a centre stage cymbal on the rousing fistfight of ‘The Loneliness and The Scream’ and the mightily talented Andy Monaghan seers through the ever-building, forward-pushing ‘Good Arms Vs Bad Arms’ you’re given the sense that these songs are coming of age, that this band is a larger leap towards the big, bold success they deserve and that the few hundred voices rising in unison as Scott tenderly drawls through the stunning ‘Poke’ tonight could soon become tens of thousands.

Even though some are disappointed by the lack of ‘Keep Yourself Warm’, their best song and one they’ve been closing with live recently but one that’s sadly not present in the set tonight, there’s little ill will to feel towards such a set of charming, whisky sipping bastards.

Heartfelt. Yeah, you can believe that. Serious. That too. Earnest? Well, maybe not so much but two out o’ three ain’t bad. The thing is that Frightened Rabbit are making these attributes virtues once again. They’re a world away from the bands that have attempted to borrow from them and achieved broad, bland success (looking at you, Mumford) and they’re evolving further into transcendence with every passing moment tonight. They’re that band. One imagines Kelly Jones slinking away from the venue, wondering how all this is possible.