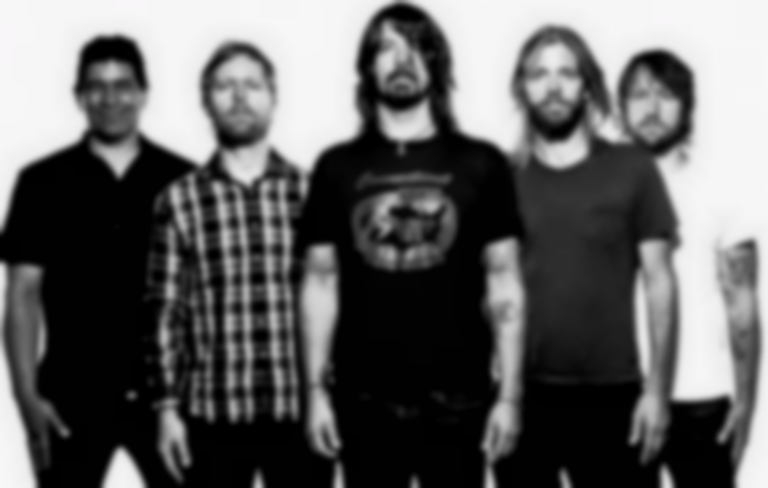 After a string of spontaneous and intimate shows in Brighton and London last week under the moniker “The Holy Shits”, the rock band of our generation, Foo Fighters, tonight headlined The Invictus Games closing ceremony. The day featured acts such as Ellie Goulding and The Kaiser Chiefs, making the headline rockers seem perhaps slightly out of place, but they closed the day with a bang nevertheless, and was enjoyed by soldiers and fans alike.

The Invictus Games is new initiative championed by Prince Harry, using competitive sports to support wounded Servicemen and women, promoting respect and resilience in their recovery. The closing concert today featured a mixed bag of artists, from Rizzle Kicks to Ryan Adams, and so whilst the atmosphere felt a tad more family-friendly than a normal Foos show, most seemed to get into the good spirit of the day. Prince Harry and Dave Grohl have clearly become quite pally in the run-up to the day, as the royal calls him “really old” in his speech before their entrance. The two hug as the band run on and kick in to the hefty “All My Life”.

With only an 11 song set, tonight is all about the hits. Grohl pans the length of the stage for “Times Like These”. “The Pretender” has a new 70s classic-rock breakdown, which some die-hard fans have likened to the teasers for the band’s upcoming concept album Sonic Highways, although we’ll have to wait until November to see if this is the case. These classic-rock breakdowns make them feel even more seminal to our generation than they are already becoming as rock heroes. Indeed, heroes are an obvious theme for the night, not gone unnoticed by Grohl who dedicates “My Hero” to the athletes. Soldiers film them on their phones in admiration, and the moment becomes quite moving.

Grohl makes it aware they have a lot of songs to plough through in not a great deal of time, but his incorrigible sense of humour still permeates: “A friend called me up and asked if he could give Prince Harry my number. And, well, everyone else seems to have it so I said ‘why not?’” Drummer Taylor Hawkins cracks up while singing “Cold Day In the Sun”, possibly forgetting his words, and it’s great to see that despite a somewhat rushed set, they still have time to bond with the Olympic Park. It’s certainly a different experience to what those lucky enough to have seen The Holy Shits last week would have felt, but a stadium’s worth of “Oh”s for “Best Of You” is arguably the only way to close the day with as much emotional power as the Invictus Games were made to inspire.