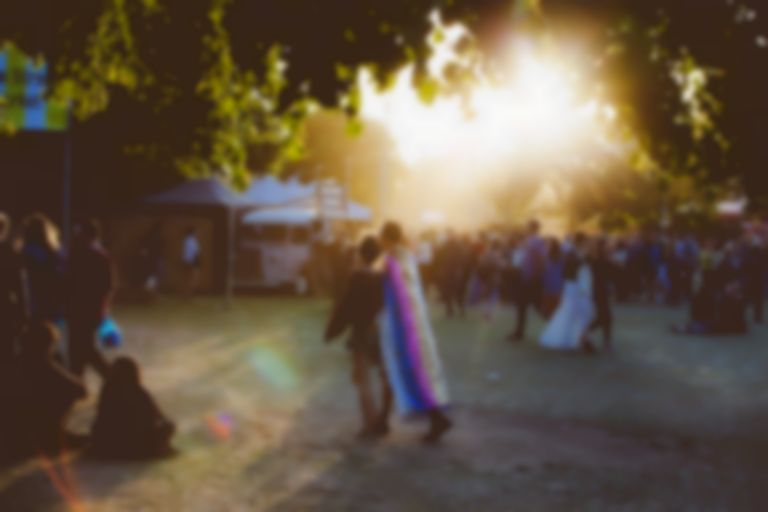 What a weekend! As we nurse our hangovers and brush the dust from our shoes, Charlotte Krol, Russell Warfield and Lauren Down look back at the second day of this year's Field Day Festival in Victoria Park.

More industrial and punishing than their former iteration in Women, Viet Cong dedicate a good third of their entire set building "Death" through minutes and minutes of brutal instrumental bliss. The wall of noise throughout is intense, but with clean guitar tones and shimmering synth lines cutting their way through the mire for detail and texture, it makes for a bracing mid-afternoon jolt. RW

Over on the main stage is a band that looks like they've come straight out of the '90s. Brooklyn's DIIV saunter into the sun in oversized retro Disney T-shirts, but quickly shake the look with modern atmospheric guitar-pop. Sadly for fans of their debut album, this was a set dedicated to new material save for the odd oldie like "Oshin (Subsume)". Where they did play songs from their debut, the crowd lit up, bouncing along to the propulsive drums and layers of shimmering, reverb-heavy guitars. CK

Matthew E White is a romantic soul. Sadly, even with just two guitarists on stage, his low riding whisper struggles to make itself heard over their gorgeous, bluesy guitar runs. Upbeat rock and roll numbers see his voice fare a bit better, but it’s a surprise appearance from Natalie Prass which is the real treat – her honey drenched voice effortlessly filling the tent, complementing White’s guitar perfectly. RW

Mac DeMarco is a stupidly likeable live performer, and his woozy, slacker guitar runs are basically the perfect soundtrack to a blazing hot Sunday afternoon. It goes down brilliantly. Always in a screwball mood, today the band are even more willing to jam, wig out, joke around and kick back - it is after all the last date of their tour. The mood is infectious, and have-a-go love songs like "Still Together" turn into the unlikely festival favourites we always knew they would be. RW

Opening with the song she usually closes with, Patti Smith's set is triumphant from the off. The words of "Gloria" resonate with new fans and the die-hards alike - blasting out over a sun-scorched crowd who had every intention to dance through the afternoon. "Free Money" sounds tremendous, its thunderous bass and pounding drum beat standing in defiance of all those sound restrictions and flaring up with agression as Patti's punk roots take hold. Playing through the entirity of her much adored Horses album, Smith's set is a wash of cantering rhythms and relentless energy, forceful nature and odd elegance. Every harmony sounds slightly unharmonious, but it's the offbeat poet in Patti Smith that has always ensured she stands apart, her ability to find something wonderous in every situation is infectious. This afternoon's set is evidence of that. LD

Rolling psych chords fill the stage as Yak frontman Oli Burslem steps up to the mic with that kind of Mick Jagger swagger. A sea of undercut mops shake in the front row as the swirling limbs of the moshpit spread outwards, enveloping the entire tent as the trio's infectious bass grooves spill out into the warm afternoon. Burslem climbs the speaker stack before delving into the crowd, his guitar whirring with the feedback of a hundred grabbing hands. The appeal of this London based lot is immediately apparent: it's vibrant, visceral and just a little bit verbose. LD

Beyond The Wizard’s Sleeve

This is an odd bit of programming. Coming on straight after Patti Smith’s blazing set, but while the backdrop is being prepared for Ride, Beyond The Wizard’s Sleeve are relegated to playing a field of people heading for the bar, and finding their friends for the headline act. Still, even as background music, the spacey, psych-dance of Beyond The Wizard’s Sleeve is always a welcome addition to any hot sunset. RW

Field Day have really carved out their Sunday niche now: indulging in nostalgia, without being at all kitsch. Ride are gratefully received today. Heavily associated with the '90s shoegaze scene, it’s easy to forget how spunky and zippy their arrangements are, and how glamorous their guitars can sound. It makes for a loud, satisfying and natural close to a sun-soaked festival. RW